A Geithner Tax Holiday for All of Us?

RUSH: Now we have learned, ladies and gentlemen, well, we’ve learned a lot about Tim Geithner. He’s not gonna get away with ignorance. The International Monetary Fund informed Geithner on his taxes, they informed every employee four times a year when the quarterly estimates are due, what their taxes are. They are paid the gross. Oh, you know what else I learned about this? All IMF employees are paid the gross, and then every quarter they have to file estimated taxes based on their earnings for that quarter or a percentage of their previous year’s earnings divided by four, whichever is the most advantageous for you. And they get statements every quarter, four times a year, explaining what their approximate tax is based on how much they’ve been paid. He knew all of this. He just chose not to pay it. He just chose not to pay it, but you know what else they did at the IMF? According to Byron York at National Review Online, the IMF grossed up all of their employees that are paid the gross. I’ll put it in terms you can understand. Let’s say that your boss wanted to give you a $25,000 net bonus. Your boss would gross up whatever it cost so that your net would be $25,000 after all the taxes, fees, and everything else were deducted. So it might cost your boss $32,000 or $33,000 to get you a net bonus of 25. 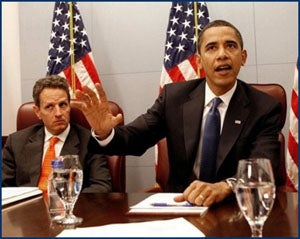 The IMF grossed up the amount of taxes employees would owe so that their actual pay was a net, not a gross. And he still claimed ignorance. They sent out memos all the time from the IMF to their employees, they had a manual explaining all of this. He’s the only one that understands the recovery, he’s the only one that can fix our recovery, he’s too big to fail, it’s an innocent mistake, it’s a mistake a lot of people make. I would love for Obama to give me the same kind of tax holiday that Geithner got. I wish the whole country could get that same kind of tax holiday that he got. This guy intentionally evaded his taxes, it was not an honest mistake, the party of taxes has to start taking responsibility for it. Whether Lindsey Graham likes it or not, we put up with Charlie Rangel as a crook now running the Ways and Means Committee. He should be thrown out of office. There’s no reason to promote a guy who purposely didn’t pay his taxes.

Look, this resonates with the public, folks. A guy who was told how to pay his taxes; who knew he had not paid his taxes; who still didn’t pay his taxes; then in order to become Treasury secretary, paid them way late. This isn’t an honest mistake. It’s a guy who was evading responsibility. I resent it. Given the amount of money I pay in taxes, given the amount of money you pay in taxes, you ought to resent this, too.

RUSH: Let’s start in Mesa, Arizona. This is Nate. Great to have you on the EIB Network. Hello.

CALLER: Hey, how are you today?

RUSH: Fine, sir. Thanks very much.

CALLER: Hey, I want to go back to the Geithner appointment just briefly. It is an absolute outrage. Where are the same people who crucified Joe the Plumber for his tax debt of less than two grand?

RUSH: Yeah. In fact, that was not a common mistake, was it? That was a crime, and Joe the Plumber had to be raked over the coals and they had the Ohio government official doing background checks, without a warrant I might say.

CALLER: And Biden, I think it was on Leno, was saying he was un-American.

RUSH: What was that, say that a little slower.

CALLER: Wasn’t Biden on Leno, The Tonight Show where he just said he was not even an American.

RUSH: Yes, in fact, something else about Joe Biden. Joe Biden also said that if you don’t pay your taxes you’re unpatriotic. You’re paying taxes, you’re patriotic. It’s a patriotic thing to do. Paying increased taxes is a patriotic thing to do, so I guess we’re to assume under Biden’s terminology that Tim Geithner was unpatriotic. Here are some of the details of this as provided by Byron York at National Review Online: ‘Documents released by the Senate Finance Committee strongly suggest that Geithner knew, or should have known, what he was doing when he did not pay self-employment taxes in 2001, 2002, 2003, and 2004. After his failure to pay was discovered, first by the IRS and later during the vetting process, Geithner paid the federal government a total of $42,702 in taxes and interest. The IMF did not withhold state and federal income taxes or self-employment taxes — Social Security and Medicare –‘ When you’re self-employed, you pay the whole boat, folks ‘– and they didn’t withhold from employees’ paychecks.

‘But the IMF took great care to explain to those employees, in detail and frequently, what their tax responsibilities were. First, each employee was given the IMF Employee Tax Manual. Then, employees were given quarterly wage statements for the specific purpose of calculating taxes. Then, they were given year-end wage statements. And then, each IMF employee was required to file what was known as an Annual Tax Allowance Request. Geithner received all those documents. The tax allowance has turned out to be a key part of the Geithner situation. This is how it worked. IMF employees were expected to pay their taxes out of their own money. But the IMF then gave them an extra allowance, known as a ‘gross-up,’ to cover those tax payments. This was done in the Annual Tax Allowance Request, in which the employee filled out some basic information — marital status, dependent children, etc. — and the IMF then estimated the amount of taxes the employee would owe and gave the employee a corresponding allowance. At the end of the tax allowance form were the words, ‘I hereby certify that all the information contained herein is true to the best of my knowledge–” The bottom line, this was not an innocent mistake. This was done on purpose.

The avoidance of these taxes had to have been done on purpose. If they weren’t done on purpose, it’s not an innocent mistake, it’s something else. But how many of you have ever been grossed up? Let’s say you get a bonus. Let’s say your employer bonuses you, and let’s say your employer says, ‘You know what, I’m giving you a $1,200 bonus for good work this year.’ You get your bonus and you find out it’s $600 or $700 bucks because they take the taxes out of it. If your employer really wanted to bonus you $1,200 bucks, he’d pay you $1,800. That’s what they were doing at the IMF. They were telling every quarter what their employees owed in taxes, and the end of the year giving them allowance to pay those taxes. And he still didn’t do any of this! He’s the only guy smart enough to save us from our economic ruin. I would love to have the tax holiday this guy got. He got a four-, five-, six-year tax holiday on a significant portion of his income.

There’s only one way — trust me on this — there is only one way that this was incidental, that it was a mistake, because this amount of money is so tiny to him — remember, the guy, the New York Federal Reserve. Trust me on this. It could well be he didn’t worry about this ’cause it’s not even pocket change. Don’t know. But I’m just telling you that somebody is going to not pay attention to what he owes on $36,000 a year means either he’s purposely cheating or the $36 grand, he didn’t even see it, he didn’t even notice it.

RUSH: Let me make a minor semantic correction. I said I would like the tax holiday that Tim Geithner got. He didn’t ‘get’ one; he ‘took’ one. (laughing) It is a small semantic change, but it has huge impact. Timothy Geithner took a tax holiday. Now, we know about not paying his own income taxes at the IMF and not paying his nanny taxes and having illegals working at his house. ‘All that’s common mistakes, Rush. The experts all agree.’ Except when Joe the Plumber had the $2,000 tax lean, why, he was a hardened criminal who deserved to be destroyed and investigated! But it’s not just those taxes that Geithner played games with. He is under a lot scrutiny on a variety of errors on his tax returns that surfaced during the vetting, during the transition team vetting.

They include the fact that Mr. Geithner used his child’s time at overnight camps in 2001, 2004, 2005, to calculate dependent care tax deductions, but sleep-away camps do not qualify. He also failed to pay an early withdrawal penalty from a retirement plan. Now, he makes $400,000 a year as the head of the New York Fed. So maybe my theory that the 36 grand didn’t register ’cause was it so insignificant (I doubt that’s the case) at 400 grand, where they are deduct taxes, it’s a little over 200, so 36 would matter. So I was trying to give him the benefit of the doubt. I think there’s a conscientious effort here to take a tax holiday. Now, I checked my e-mail during the break, and a lot of you people, I appreciate your concern. A lot of people ask, ‘Rush, why don’t you go easy on this guy? When he gets confirmed, you’re just gonna get audited all the time. You’re gonna get harassed with audits.’

Ah, no, no, no, no. That was going to happen anyway. It was. Increased audits are going to happen anyway. That’s not gonna shut me up. Now, if you’re Eric Holder, here’s Eric Holder. Anybody else, any Republican nominee for attorney general who had participated in something like the Marc Rich pardons wouldn’t have even been picked because the Republicans would know that the Democrats wouldn’t put up with it. But what is Eric Holder learning based on the hearings so far this morning? Eric Holder has learned, while looking at the Republicans, ‘I can do anything I want — and after I do whatever I want, I can excuse it any way I want, because I know that you Republicans will do absolutely nothing, except kiss my butt,’ which is exactly what’s happening.

The Republicans are kissing Holder’s butt, and they’re cracking jokes about whether or not he could beat Obama in a basketball game. Really? This is part of his confirmation hearings as AG. But, folks, why would you expect any different from people who have bought into the premise that ‘we all want Obama to succeed.’