ERIN BURNETT: The fear is that Washington’s new spirit of cooperation is already gone. Now, sit down. Prepare yourself. You see this, ‘My Bipartisan Stimulus’? This was written by Rush Limbaugh making a bid to keep bipartisanship alive. That’s the op-ed he wrote this morning. He joins us on the news line. Rush, a lot of people are skeptical with a headline from you: ‘My Bipartisan Stimulus.’

RUSH: Why skeptical? I’m just trying to build bridges and roads to the administration for genuine bipartisanship and cooperation and fairness. The president says that he still wants to work with Republicans.

RUSH: Here I am. We can work together and do what’s best for the American people.

BURNETT: And you call —

HAINES: (interrupting) I — I — I’m sorry, but, ah, wait a minute! A week after the inauguration you said you hope he fails. Are — are you now admitting that that was a stupid and mean-spirited thing to say?

HAINES: Then how is that bipartisan!

RUSH: (laughing) You’re being contentious with no reason. It came after a thorough explanation of my belief that liberalism, which is what Obama represents —

RUSH: — destroys the free market, destroys capitalism. I think this stimulus plan with about re-FDRing America, the New New Deal, and as a conservative I want liberalism to fail. I want the country to succeed, and that’s what I meant, and that’s what I said over and over again. You’ve gotta stop reading these left-wing liberal sites that take me out of context.

HAINES: Yeah! I hear hypocrisy. You’re saying in this — in this piece, you say, uh, you know, ‘our economy doesn’t know the difference…this is about jobs now…leave politics aside,’ and yet the first thing out of your mouth is politics! About liberal and conservative, Republican and Democrat!

RUSH: Exactly. But I am trying to show this. You know, this vote that happened in the House yesterday is actually a failure. The bipartisan vote was the defeat: 11 Democrats joining Republicans. The partisan vote was all Democrats. This is going to have trouble. You know, he wants Republicans on the bill, Mark, because he knows this isn’t gonna work. He wants Republicans so that he has cover so that they can’t run for reelection saying they opposed this debacle. I’m trying to propose something here that will work with the best interests of the country at heart.

RUSH: How can that possibly be hypocritical?

BURNETT: All right. Rush, let me just get in. I want to give people a chance to understand your plan. You’re calling it the Obama-Limbaugh plan, and you took the vote that the country voted for Obama, who voted for him and who didn’t, and that’s how you broke it down, right?

BURNETT: So his share of it goes to spending, and the other share goes to tax cuts, right?

RUSH: Exactly, and he gets to choose how he wants to spend it with the Democrats on Capitol Hill, and the Republicans and me get to determine the tax cuts.

BURNETT: And you’re going to cut the corporate tax rate in half, right?

RUSH: Precisely, and we’ll suspend the capital gains tax to incentivize new investment for a full year and then reestablish and re-implement it at 10% — and probably some tax cuts in the area of real estate, too. That’s an area that needs to come back. See, I don’t… Obama said yesterday — I don’t know if you guys were still on the air or not, but he had a meeting at the White House with the CEOs, and he came out and he sounded like Ronald Reagan. He was talking about how it’s the people who make the country work; it’s the people out there who are going to revive the economy. And twenty days ago, he said government is the only entity — there’s your hypocrisy, Mark — that can revive this economy. Yesterday what he said is exactly right, and I totally support that when he sounds like Ronald Reagan.

BURNETT: So, Rush, it sounds like what you’re saying, ’cause — and Mark’s picking up on something, as you know, that got a lot of coverage — that you said, ‘I would be honored if I was headlined all day long ‘Limbaugh: I Hope Obama Fails.” What you meant to say there was, ‘I hope liberalism fails, and if he is going to emblematic of that, I hope he fails.’ 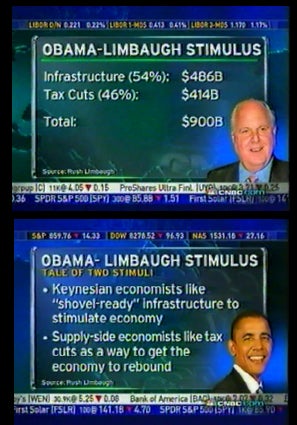 BURNETT: But as Obama, you’re not trying to hope he fails, right?

RUSH: No, I support the president. I just don’t support his policies.

RUSH: I said that on purpose, because everybody was falling in line behind this plan like a bunch of lemmings, and the media wasn’t even examining the specifics. Somebody had to get somebody’s attention on this, ’cause it’s a debacle.

HAINES: Here’s — here’s — here’s something I find interesting, Rush. Ah, you — you talk about the vote being roughly — you know, you — you do a little fiddling to — to even up — the vote was roughly 54-46 in favor of, uh, Obama, so therefore divide the stimulus plan 54-46. I — I find that a — a refreshing breath of air from you because when the vote was 51-49 in favor of Republicans, I don’t remember you being this concerned about bipartisanship.

HAINES: (shouting) I don’t remember you proposing that any program be split reflecting that vote!

RUSH: We’ve got limited seconds here, and I want to get to this answer. Bipartisanship, as it’s defined in Washington, is Republicans caving to what Democrats want. That’s what bipartisanship is; that’s what they wanted yesterday. My column in the Journal today is truly bipartisan; and I’m willing, if that’s the definition of it, full speed ahead for bipartisanship.

BURNETT: A lot of people saying your bipartisanship here, this plan makes some sense. Mark, there’s some things in this plan that make a lot of sense, that corporate tax cut.