The Deficit and the Porkulus

RUSH: This is Dori in Kawai in Hawaii. Nice to have you with us. Hello.

CALLER: Hey, Rush! I’m the glad to be the next caller when you feel slightly humbled. (giggles)

RUSH: Thank you. Thanks very much. I’m slightly humbled. Slightly.

CALLER: Well, you apologized, and that was sweet of you. We’ve been listening to you from about 1990, and it’s a pleasure to talk to you. And my husband told me to choose my words carefully because I’m speaking to an intellectual giant.

CALLER: Yes. I like it, and I enjoy your confidence in your intelligence. It’s commendable.

CALLER: Anyway, I’ve got a comment and a question.

CALLER: I keep hearing on media recently that Obama inherited a trillion-dollar deficit from Bush. Could you please do me a fare and confirm and reconfirm —

CALLER: — for all of your listeners?

RUSH: That’s not true. He inherited a $3 trillion — 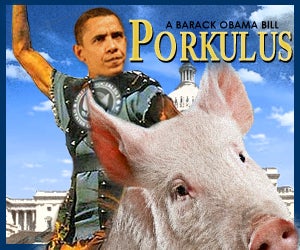 RUSH: No, no, no, no, no, no, no. He inherited a $3 trillion budget with a deficit of around $704 to $700 billion. This stimulus package is going to add another trillion on top of what Obama inherited. There was no trillion-dollar deficit inherited, unless you want to count up some of the TARP money and all that. I guess it’s theoretically possible. But that’s no excuse for what Obama is doing. If anything, that ought to cause some belt tightening. Obama ought to be looking at it and saying, ‘Okay, I’m inheriting a trillion-dollar deficit. We don’t have any money to spend.’ He’s doing just the opposite. ‘We need to spend even more!’ This is not good.

CALLER: Yes. And I have, Rush, a lot of business from it. I had to lay off all my workers and my daughter just got laid off and has to move to Colorado where they’re going to send the Guantanamo terrorists. Oh, that scares me. But now my question. Today regarding Madoff and his $50 billion scheme, and now Crazy Eddie and his hundred-million-dollar scheme with his cooked books, why don’t we ever hear anything about Franklin Raines and Jim Johnson and the recipe books they authored?

RUSH: Because they’re Democrats. They’re protected. Why don’t we ever hear about Chris Dodd? You know, Chris Dodd is demanding that the guys at Wall Street that got these bonuses give the money back. We could say the same thing to you, Senator. How about giving some of the money you got in an unfair mortgage deal from Countrywide? Where does this stuff stop?