A Message for Robert Gibbs and His White House Press Lackeys

The fact is Obama is killing the economy, doing so on purpose, while he’s expanding his power and that of the federal government. Isn’t that a news story, Ed? You got a bigger news story than me? Isn’t what’s happening to people’s lives and their jobs and their homes and their futures, Ed, isn’t that a bigger story than me? Why don’t you ask Robert Gibbs about that? ‘Mr. Gibbs, isn’t the economy and the Wall Street collapse and people losing their jobs and their homes, isn’t that a bigger story than Rush Limbaugh?’ You think Rahm Emanuel could talk about that, some of his talking points to George Stephanopoulos and Carville and Begala? Is it not worth coverage what’s happening to the US economy? Barack Obama’s already failing when it comes to the economy. He is succeeding however in empowering himself and the government. So Obama is killing the economy, he’s expanding the government, and we’re all supposed to stand up and give him a standing O? We’re just supposed to stand up and cheer this like you butt boys in the White House media?

Let me ask you this, Ed, or Chuck, or Helen, or, well, hell, I can’t remember any other names in the White House press, they look like they came outta cookie molds. But let me ask you a question, maybe you ought to ask Gibbs — I know I’m pipe dreaming here, but here’s a question — maybe Jake Tapper should ask Obama or Gibbs, ‘What would you like Rush Limbaugh to succeed at? Don’t you want Rush Limbaugh to fail, Mr. Gibbs? Aren’t you interested in Limbaugh failing? Mr. Gibbs, what does President Obama want conservatives to succeed at?’ Or you could ask it another way, ‘Jake, you could say Mr. Gibbs, is Obama trying to permanently defeat conservatism so it’s not a viable force anymore? What part of our policy, agenda, philosophy, does Obama want us to succeed at?’ I’m plenty happy to talk about what I hope he’s trying to do fails. But I’m also at the same time the one guy in this country talking about success and my desire that everybody have it. Here’s the thing, Ed, if we haven’t lost you yet. We have a man who is systematically trying to destroy his opposition with his policies, and we are debating my defense of our policies as obstructing him?

Barack Obama is trying to destroy his opposition, not just me, the whole Republican Party, the whole conservative movement, with his policies. And you entertain this White House-led debate that says I, defending my policies and myself, is obstructing Obama? I’m getting in the way of the authoritarian? When I listen to you people in the White House press corps and on cable TV, I actually come to the conclusion that you think that we’re just to surrender, surrender everything we believe in, surrender everything we have, surrender it all so Obama’s remaking the nation becomes a reality. That’s the way you sound, as butt boys in the Obama administration. Whatever Obama wants, he’s going to get, and whoever’s in the way has got to be defeated, wiped out, or they must surrender. Well, I’m not giving up, and nor are any of the people on my side.

RUSH. A quick phone call before the Robert Gibbs sound bite that I promised you. Chris in Reading, Pennsylvania. Hi. Nice to have you here.

CALLER: Hi, Rush. I just wanted to express my amazing kudos to you for, you know, sticking up for the conservative side. We’re out here. We’re listening. We’re waiting for somebody in the political world on the Republican side to say what you’re saying, and nobody is saying it. They’re trying to out-Democrat the Democrats, and when the Democrats are picking on you, it’s giving somebody an opportunity to express the conservative side and articulate it. All our politicians do is say, ‘We need tax cuts. We need lower government, smaller government,’ but they never say why. They never express the benefits. They never give a vision. And it’s just refreshing.

RUSH: They’re not in that frame of mind. That’s why I touched on this at CPAC in my speech. What we should be all about right now is just what you said: philosophy. We’re caught up in policy. We’re caught up in letting the Democrats establish the agenda or the premise of any issue, and then we debate it as though Obama is just another Democrat to come down the pike. This is far worse. This is far more than an average Democrat down the pike. This is an authoritarian who wants to take as much control for himself and the Democrat Party of this government, the economy, as he can. It’s silly to start playing around the edges here with policy and simply discussing votes and this and that. We can’t stop anything he wants.

That’s why this is an ideal time for Republicans to set the stage for 2010, and to start running around talking about philosophy and principles. Because you know something, folks? When you live by your principles — and, by the way, everybody falls off the train now and then. Nobody’s perfect. We’re not demanding perfection from anybody, but when you live your life by your principles — conservative principles in this case that we’re talking about — the policy comes naturally. Now, Obama, he has to calculate policy. He has to. We don’t. But this is a perfect time to be selling conservatism, to contrast Republican conservatism with Obama. They’re not there yet. They’re still shell-shocked, and they’re still caught up in the process of policy. But they’ll get there. As this goes on and we get closer to Election Day and this stuff keeps up. They’ll catch up, hopefully, ’cause this is the only way we’re going to beat this stuff. We’re not going to beat this with Democrat Lite. It ain’t going to happen.

‘Don’t you think you coulda let the Republicans in on this a little bit more?’ and Pelosi said today, ‘They ought to be lucky they got what they got. I could have fast-tracked this. I could have made this happen a lot sooner than it did. They ought to be lucky with what they got.’ Remember: bipartisanship. This is kind of like war. The only time you get peace is when one side is defeated. Bipartisanship only occurs when one side is defeated and loses and caves in. Ask the Japanese about bipartisanship! Ask the Germans about bipartisanship! So it’s a silly, stupid question. (sobbing New Castrati impression) ‘Oh, no! What does this do for our wonderful president’s notion of bipartisanship, Mr. Gibbs! What can we do? What can we do?’ And here’s Gibbs’ answer. 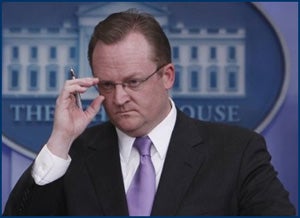 GIBBS: The best question, though, is for you to ask individual Republicans whether they agree with what Rush Limbaugh said this weekend. Do they want to see the president’s economic agenda f-fail? You know, I — I — I’ve been there a number of, uh — of guests on television throughout the day and may be into tomorrow who can let America know who — whether — whether they agree with what Rush Limbaugh said this weekend. He doubled down on what he said in January in, uh — in, uh — in — in wishing and hoping for economic failure in this country. I can only imagine what might have been said a few years ago if somebody might have said that on the other side relating to, uh, what was going on in this country or our endeavors overseas.

RUSH: Ed, did you hear what Gibbs said? He said, ‘I can only imagine what might have been said a few years ago if somebody might have said we want failure in the country or our endeavors overseas.’ For God’s sakes, the Democrat Party not only wanted failure, they proclaimed it! Everybody knows the Democrat Party wanted defeat in Iraq. They were dissing the troops. ‘Oh, we support the troops; we just don’t support the mission.’ It’s like me saying, ‘Well, I support the president; I just don’t support his policies.’ I would be so sophist as to say that, but this is incredible. The Democrat Party for six years tried to put this economy into the crapper! The Democrat Party for six years tried to orchestrate the failure of George W. Bush at every turn.

That’s politics. But now all of a sudden we have The Messiah, and we’re supposed to lie down! The Messiah is too crucial, too important, too big to fail. We must sit idly by, surrender everything we believe so that The Obama Messiah can succeed. And then you hear him say, ‘It would be charitable to say that Limbaugh doubled down on what he said in January, wishing and hoping for economic failure in this country.’ Now, I’m not telling you anything you don’t already know, folks. My income is derived from economic success. My business model requires economic success. Advertisers have to have healthy businesses — not just at the national level, but at the local level — to support local radio stations.

I have preached. I have taught. I have prayed for economic success for everybody. Hey, Bob? I have investments. I’ve seen ’em dwindle in value. My business partners have investments. My listeners have investments. You guys in Washington, you’re going to get paid regardless what happens, Bob. You’re going to get paid, you and Emanuel and Obama, regardless of the success or failure of the economy. You don’t have any skin in the game, Mr. Gibbs. You skim off the top. We could have 25% unemployment. You’re going to get paid, Mr. Gibbs. You have no skin in the game. I’m using the term a lot today because I actually think it fits. You butt boy media people in that White House pressroom, do you listen to what this man says to you? Do you actually believe I want economic failure?

Don’t you understand that Obama’s policies equal economic failure? Obama’s policies destroy the ability for the private sector to create wealth and prosperity and opportunity. That’s all going to be transferred to the government, which will pick winners and losers. And he’s gonna tax and punish wealth, achievement, starting at $250,000 a year. He is going to offer disincentives for people that work hard, Mr. Gibbs — and Ed? You people in the media, that’s why I’m calling you butt boys. You haven’t the slightest bit of curiosity about any of this? And you think I’m supposed to shut up and lay down? I don’t want to see the wealth of this nation destroyed. I don’t want our economy to fail. What is so hard to understand? Well, it’s not hard to understand.

They are purposely distorting all of this for a multiplicity of reasons. Gibbs also said… There was something else in this piece. Da-da-da-da-da-da, da-da-da-da, da-da-da-da-da. ‘Do they want to see the president’s economic agenda fail? You know, I bet there are a number of guests on TV throughout the day and maybe into tomorrow who could let America know whether they agree with what Limbaugh said this weekend.’ So the White House is directing and leading reporters in what to say, what guests to get, and what questions to ask them. This is a teachable moment. That’s not what I said. The White House needs a press release or some kind of direct communication, maybe another open letter to the president. Maybe I should write another op-ed or something.