The Smallest Minority on Earth

RUSH: Folks, we have got to drive these people out of office. We have to start now. The Republicans in Congress need to start throwing every possible tactic in front of everything the Democrats are trying to do. This is getting absurd. Listen to this. Henry Waxman and Edward Markey are putting the finishing touches on a 648-page global warming and energy bill that will certainly finish off this country. They’re circulating the bill today. The text of the bill ought to be up soon at a website called globalwarming.org. The bill contains everything you’d expect from an Algore wish list. I don’t know how this will not raise energy prices to crippling levels; finish off the auto industry as we know it, 648-page global warming and energy bill. I have a quick question. What would happen to these people — and I think it’s already been done — but let’s just pretend, let’s pretend that there was incontrovertible evidence that global warming is not happening. Let’s say there was incontrovertible evidence that the whole thing is wrong and that the scientists who have been touting it for decades, years now, let’s just pretend they came out and said, ‘You know what, we’re wrong about this. In fact, there is no global warming, there’s global cooling,’ I wonder how Washington politicians would react. 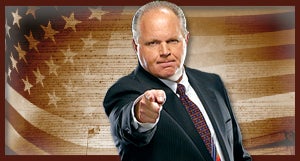 My guess is they would say, ‘We can’t trust this, this is too important,’ and they would move ahead with all of this freedom-limiting legislation anyway because that’s what this is about. Pollution controls, they’re so greatly enhanced now to the point that these mini-engines that are on these fuel-efficient cars, these little three-cylinder cars, they’re so overwhelmed they could barely move phone booths, they can barely move themselves. You put two people in them and you’re basically ticking along. I think one of the things that’s at the root of this, think of the combustible engine and what it has meant to the development of this country. People able to go anywhere in the woods, in the tundra, wherever they had to go to develop things, to build things, the American automobile is one of the greatest illustrations of human freedom. You get in it and you go where you want to go, and that’s what’s irritating to people. The fact that you can’t go any further than 300 miles without stopping for 45 minutes or an hour to charge your electric car is a boon. The less you travel, the more that you are inspired, motivated to take mass transportation, public transportation, the more that you are conditioned to live in places where you won’t have to drive, that is what these people are after.

As I said, we have a gigantic new audience to this program, the tune-in factor is just through the roof. For those of you who are new to the program, I want you to please understand that the criticism of the Obama administration here and the disagreement with practically every element of his agenda is based on one thing. We do not want to lose the liberty and freedom that we were born with in this country and that has made this the greatest country on earth, that has given us the greatest, most prosperous lifestyle any of population of human beings in the history of the planet. It has been liberty; it’s been freedom; it has been the ambition and desire to use that freedom in the concept of self-interest. I want to spend more time on this in a future program. But this notion of sacrifice that the president talked about yesterday is just over the top. Liberals always talk about sacrifice, Obama, every time he opens his mouth, mentions the need for people to sacrifice. We all must suffer. We all have to jointly suffer in order for all of us to somehow be the same, and self-interest, selfishness is condemned. And self-interest is not selfishness. Self-interest is what built this country.

When you vote for politicians who take from your back pocket to give to others, you think it’s compassionate, you think it’s caring? It’s not. It’s depriving the recipient of his own quest for self-interest. The brilliant writer and novelist, Ayn Rand, has written about this. Let me give you a couple quotes from Ayn Rand on this. ‘It only stands to reason that where there’s sacrifice, there’s someone collecting the sacrificial offerings. Where there’s service, there is someone being served. The man who speaks to you of sacrifice is speaking of slaves and masters, and intends to be the master.’ That is President Obama. ‘Where there is sacrifice, there’s somebody collecting the sacrificial offerings.’ What does it mean? President Obama says, ‘We all need to sacrifice,’ for this reason or that reason. What it means is we all need to pay more; we need to have less affluent lives; we need to dial down our prosperity, and we need to give the money to him, not a charity. He’s going to eliminate, for all intents and purposes, the tax deductibility, it’s going to be 28 cents for every dollar, charitable donations. He wants to be the distributor of the charitable donations. He wants to be the distributor of the goods because he wants the glory.

‘So it only stands to reason that where there’s sacrifice, there’s somebody collecting the sacrificial offerings.’ Who is it that’s talking about sacrifice? President Obama. Who’s going to collect your sacrificial offerings? President Obama and his government. And ‘where there’s service, there’s somebody being served.’ There’s no sacrifice in service. The president who speaks to you of sacrifice is speaking of slaves and masters. He intends to be the master. You’re the slave. You must sacrifice.

The smallest minority on earth is the individual. We are all different. We are all individuals. We are being told to sacrifice our individuality. We’re being told we must assemble in other groups of victims. Well, not all of us because some of us are the victimizers. The smallest minority on earth is the individual and thus those who deny individual rights cannot claim to be defenders of minorities. This administration claims to be a minority administration, first black president, historical nature. This administration is out to destroy the whole concept of individual rights under the guise of sacrifice, pay equalization, equalization of outcomes in other areas. But the smallest minority on earth is you, as an individual. You have individual rights, as granted by God, who created you, and our founding documents enshrine them: Life, liberty, pursuit of happiness. Those rights don’t come from other men or governments or women. They come from our creator, God. Higher power, whatever, however you want to look at it.

When any of you decide to do away with pursuing what you want in your best self-interest, you are sacrificing who you are. You are giving up control of your essence, and you are saying, I would rather be a member of a group that is approved by people so that I don’t get criticized or so that I’m thought of as enlightened or so that I’m thought of as advanced. In the process, you are helping to destroy the very foundational building blocks of the greatest country on earth, the country in which you happen to be born and the country in which you happen to live. So giving up your individual identity, giving up who you are, sacrificing your passions and your desires and your own self-interests for the so-called common good, who gets to define the common good? I would define the common good as everybody acting as an individual, born as he or she is, pursuing self-interest. That’s the common good. That built cities; that built a great country; that built railroads and engines. It built airplanes. It built everything. People denying who they are did not.

When you deny your individuality, when you give it away for acceptance into a subgroup of people, you are harming the country; you are letting the country down; you are not pulling your weight. You are seeking approval, self-love and acceptance from all of the wrong sources. You’re giving up the greatest gift you ever had, and that’s who you are. And we have an administration that wants you to willingly and excitedly, eagerly give up who you are for a common good they define, a common good that requires you to deny who you are, your individuality, what makes you different from everybody else, whether you’re not as good or whether you’re much better at certain things. You will become a number. You will become a robot who can be programmed and inspired and motivated to behave in approved ways, and you will be taught to think you are virtuous when doing so, when all you’ve done is sold yourself and your country out. You give up your individuality, you sacrifice who you are, you allow that to be taken away for some mythical status as a member of a group, you are giving up your passion to become a moderate, or worse. People without passion never built anything. People without passion never got one thing done. People without passion are drags on achievement and accomplishment. That’s what this administration wants you to become.