Pine for the “Wonderful” UK and Canadian Health Systems? (story)

The Observer, December 16, 2001: “A recent academic study showed National Health Service delays in bowel cancer treatment were so great that, in one in five cases, cancer which was curable at the time of diagnosis had become incurable by the time of treatment.” 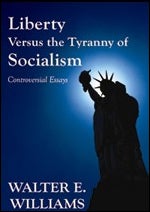 &bull; Hoover Press Summary: Liberty Versus the Tyranny of Socialism

“This Ahmadinejad must be saying, ‘These people are nuts.
They’re letting me develop nuclear weapons!” -Dr. Williams