Steve Wynn Schools Jennifer Granholm on How to Create Jobs

RUSH: Steve Wynn on Fox News Sunday was interviewed by Chris Wallace. He’s the CEO of Wynn Resorts in Las Vegas. He’s also on with Jennifer Granholm, the governor of Michigan. And Chris Wallace says, ‘Unemployment in Nevada is 13.2%. That’s the second highest in the nation. Your company, Wynn Resorts, has more than 20,000 employees. Do you see any turnaround yet?’

WYNN: No, in the sense that I think that the priorities of the administration should have been more directly focused on job creation. From the day of the inauguration forward, the priority should have been job creation. And the most powerful weapon and the tool that the government has for that is its tax policy. If the government had used its power to restrain its tax collection they would have given everybody who runs small businesses, large businesses, a chance to hire more people and that could have been done an entirely different way. With eight or $900 billion we could have created four or five million jobs, which would have made a big difference.

RUSH: That’s what you call stimulus! That’s what you call stimulus. That’s what I have been saying. That’s what anybody with even a modicum of Econ 101 understands. You have to invest and you have to create the investment. You have to incentivize growth, and this administration is penalizing it! This administration is punishing growth. This administration is doing everything it can to prevent growth. This is all done on purpose. And now, my friends, I finally am joined in my previous one-man crusade: Steve Wynn on board, Charles Krauthammer with a speech he gave on board saying the decline is purposeful. Chris Wallace said, ‘So where do you draw the line between the proper role of government in all this and the proper role of the private sector?’

WYNN: Government has never increased the standard of living of one single human being in civilization’s history. For some reason that simple truth has evaded everybody. The only thing that creates an increased standard of living is giving someone a job, the demand for their labor — whether it’s you and I, Chris, or anybody else. The people that are paying the price for this juggernaut of federal spending are the middle class and the working class of America.

WYNN: And soaring rhetoric and great speeches with or without a teleprompter aren’t going to change the truth, and the truth is: The biggest enemy, the biggest obstacle that working middle-class America has is government spending.

RUSH: Steve Wynn, Wynn Resorts, Las Vegas. He is right on the money. ‘People who are paying the price for this juggernaut of federal spending are the middle class and the working class of America,’ i.e., these poor people in Detroit. They are in those lines because they have no choice because that’s where this administration wants them. ‘Soaring rhetoric, great speeches with or without a teleprompter isn’t going to change the truth.’ So Jennifer Granholm has gotta get in on this. Wallace says, ‘Let me bring in the governor of Michigan, Jennifer Granholm. Looks like she wants to come out of her seat at this.’

RUSH: Now, this is the government of the state of Michigan where people in the tens of thousands are lining up for pittance — a pittance handout from the federal government. The state of Michigan is broke. The City of Detroit, many people who live there, is in recession. She thinks the minimum wage has raised standard of living. The minimum wage is part of the reason unemployment is rising and the fact that Democrats authored an increase of it. Folks, they are just dunces. They’re economic dunces. It is just breathtaking. Now, here she is. She’s talking to a man and calling him ‘simplistic.’ We’ll hear in just a second Steve Wynn describe how many health care policies he provides for people and how many employees he has. And not just in Las Vegas, he’s been in Atlantic City. In Macau. He was working on an operation there. But he wanted to respond to this ‘simplistic’ business, and this is the exchange that they had.

GRANHOLM: I… I agree.

GRANHOLM: I agree with you.

WYNN: Okay. That’s my point, Governor. I’m not making any other point. And, believe me, ma’am, I’ve got 20,000 employees. I’ve had as many as 150,000 families that I’ve been self-insuring. There’s nothing ‘simplistic’ about my approach to this problem.

RUSH: And, see, in this series of three sound bites, we have the perfect illustration of the problem. We have a man in the private sector who actually works, who creates jobs, jobs that are really well paying. He has health insurance for all of them, as many as 150,000 — and a government official is telling him he doesn’t know what he’s talking about, cites the minimum wage to him! He doesn’t have any clue in her mind. And this is where we are. These kind of people, with this kind of thinking as expressed here by Governor Granholm are exactly the kind of people running the whole show now, be it in Washington, be it in Michigan or wherever there is a Democrat governor. This is what they believe. And it takes me back to my opening monologue.

For what? For what? It certainly can’t… Do you realize, folks, it is… I don’t know what the word is! But to sit here and not be outraged over the economic plight of the working class and poor people in this country, to go out and be playing basketball with your staff and then go play golf after you try another church on Sunday, and then to be talking about a second stimulus, and to pile more misery on top of this with two more disastrous plans: health care reform and cap and trade. Both of which are going to create even longer unemployment lines, will create even more destitution and poverty. There’s no way to conclude other than that it must be on purpose. It’s just shocking. But this is a great series of sound bites here for people to actually learn who it is in this country that are the smart people, but more importantly, who it is that make this country work. 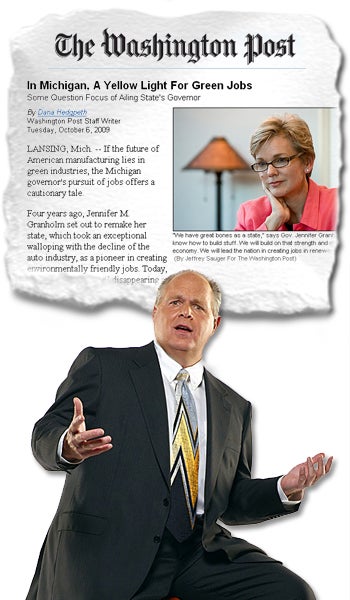 RUSH: So here’s the test, folks. The real test is this. How many private sector jobs has Jennifer Granholm created? Just last week, we had the most amazing story. It was a two-page story that took me 30 minutes to fully digest and react to. Do you remember it? In her two terms of governor, which will expire next year, I believe, the state of Michigan has lost 630,000 jobs. In the next 14 months it is expected that the state of Michigan will lose another 370,000 jobs for a grand total of one million jobs lost under Jennifer Granholm’s governorship. The story was in the Washington Post, and it was a puff piece pushing the obviously false premise that she has created hundreds of thousands of jobs. But the green jobs are to come, and then she’s going to really fix the state because she’s gonna convert the state into an all-green technology sector jobs state. And get this. By 2020, 40,000 new jobs will be created. We ought to be creating 40,000 jobs a day in this country. And in Michigan she is bragging in the Washington Post about 40,000 new jobs in 11 years.

I needed the vapors because the Washington Post was heralding this, as tremendous, great progress. Here’s the way to look at this. In 14 months, 370,000 more jobs projected to be lost in Michigan. That’s a little over a year and yet on the other side of that in the next 11 years, 40,000 green jobs will be created. I know she went to have lunch with laid-off employees, she went home to her husband, ‘Oh, my God, what can I do for these people?’ The real question here is how many private sector jobs has Jennifer Granholm created, how many has Steve Wynn created? That little side by side answer is the difference between statism and capitalism. So here we have a failed governor with a state in a near depression, holding firm to her policies, learning nothing from a man who created a multibillion-dollar enterprise that hires tens of thousands of people and could hire more but for government tax-and-spend policies and whose own city is in the tank right now because the president of the United States, inasmuch has told people the days of getting on your jet and going to Las Vegas are over. Have you forgotten that?

That was early on when he was beating up the Wall Street guys back when the automobile guys had the audacity to fly from Michigan to Washington in their corporate jets to be grilled by members of Congress over why they needed bailout money. So they had to come back with their revised plan some months later and they had to drive, and the president said the days of getting on your jet and going to Las Vegas are over. Guess what’s happened to the hospitality business? I’m telling you, this administration has taken a fire hose to the US economy. It’s mind-boggling here. Steve Wynn, multibillion-dollar enterprise, hires tens of thousands of people, could hire more and would love to be able to hire more, but because of government tax-and-spend policies, he can’t. And on the other side, a failed governor, who’s telling him that he’s simplistic.