CALLER: Good afternoon, Rush. Nice to talk to you.

RUSH: Yeah. I’m just waiting for the music to end so I can hear you.

CALLER: Can you hear me now?

RUSH: I can hear you now, yeah.

CALLER: Got a quick question for you regarding the situation with the hospitals in Florida.

RUSH: If they are indeed overwhelmed by patients with the —

CALLER: — swine flu or Asian flu or Hong Kong flu or whatever, and you have a seven-year-old child sitting there and a person that’s dying, that’s terminally ill with cancer, okay? Which one would you like treated? There’s only one bed left in the hospital, you got a seven-year-old sitting there with the flu that needs treated, and you’ve got a person that’s terminally ill with cancer and, you know, they’re there for whatever reason. 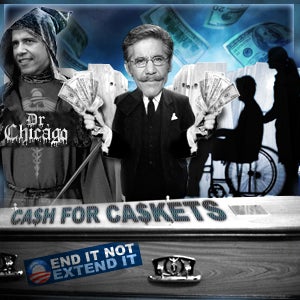 RUSH: Well, in the first place, I don’t accept the premise of your question, because you may not have understood my point. My point is that the Obama people and the Democrats are telling us there aren’t any death panels in our health care. ‘We’re not going to have any rationing! This is all scare tactics on the right.’ Here’s a story from South Florida, Ft. Lauderdale: Oh, yeah, there certainly is a death panel. In this case it’s Florida health agencies and they’re going to decide — they’re going to tell the hospitals to decide — who gets kicked out and who gets admitted. The whole thing right now is just a supposition. This is being designed to frighten people and scare people, which is an operational tactic of people on the left to keep people on edge and worried. ‘We’re going to die!’ It’s not going to be our responsibility. We’re just going to have some faceless agency tell the hospital to choose which patient goes and which one doesn’t. This has never happened in America as far as I know. I’ve never seen stories like that. We’ve had flu epidemics every year; I’ve never seen a story where a hospital agency in the state is telling hospitals, ‘You better choose on a panic that has not yet really developed.’ I’ve never seen this before. It’s all part of a scare tactic that whether these people are in on it or not they’ve fallen for it, at least, and it disturbs me. ‘Cause I don’t know that this is ever going to be a reality, not with the swine flu.

CALLER: So what you’re saying is their preparedness is a farce, them preparing for this possible eventuality?

RUSH: No. I’m saying that their announcing it and making a big news story out of it is part of an overall campaign to keep people on edge and full of angst over this.

CALLER: Okay, who’s making it a news story, though? The television, radio, you know, the talk show hosts?

CALLER: The apparatus that you’re part of is making the story.

CALLER: They’re passing papers between themselves saying, ‘You need to be prepared for this eventuality.’

CALLER: And you’re blowing it out of proportion using your —

RUSH: An excellent point from the e-mail. It’s not often that I miss making the best point to be made, but I did here. The guy who called from Lorain, Ohio, and wanted to know, ‘Well, who would you choose, the seven-year-old or the 75-year-old with cancer?’

You know, I got sidetracked on telling him, ‘Look, you’re missing the point, folks, gang, guys,’ but the point here is I’ve never seen a story like this reported before. They’re all just setting up crisis, chaos, and so forth. The answer is that we in the United States of America ought never have to face this question because we would all hope that the government would be looking at ways to expand health care for everybody, not ration it; to find a way to have a bed for all who needed it. This is the government! We have a liberal government looking only at limitations and getting rid of people that they think are not worthwhile, valuable, or whatever.