RUSH: Here’s Dave in Wyoming on a cell phone. Great to have you with us, sir. Hello.

CALLER: I have a question about your Miss America judging. 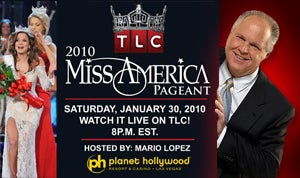 CALLER: First of all, let me thank you for your service for going down there.

&lt;*IMAGE*CALLER: I mean, Las Vegas and Miss America contestants parading around, that must be awful.

RUSH: Well, somebody has to do it, and everybody has to be somewhere. And my name came up.

CALLER: Hey, I want to know if you’ve experienced the strange phenomenon yet that when a black contestant is on the stage, you ‘forget’ that she’s black.

RUSH: (laughing) You are not helping.

CALLER: It does happen.

RUSH: You are not helping me out here. (laughing) I forgot… (laughing) Actually the black contestants are not on the stage for 70 minutes or at least an hour, and it took that long for Matthews to realize that he’d forgotten Obama was black. Which, again, caused a little bit of a stir. But, no. We’re colorblind here at the Miss America Pageant.

CALLER: What would the media had done to you if you had said something so completely off-the-wall, stupid, ignorant like that?

RUSH: Oh, I know. I’ve had a bunch of people if I had said that, if I had said what Harry Reid said, ‘He’s a light-skinned black, doesn’t speak with a Negro dialect unless he wants to. This guy can win!’ If I had said that, oh, you’d still be here, why, you’re still hearing about my comments that were not even about Donovan McNabb and it’s five or six years after the fact now. So you’re exactly right, a brilliant observation on your part.

CALLER: Rush, the Drive-By Media has forgotten how to blush.

RUSH: Yeah, I don’t think you can embarrass them. It’s pure propaganda all the time.

RUSH: Good way to put it.

RUSH: Thanks very much, David. I appreciate the phone call. By the way, speaking of this Miss America Pageant, I was going to bring this up because I frankly had forgotten it until this guy’s call. They’ve had a different emcee each night of the preliminaries: Tuesday, Wednesday, and Thursday night. Last night was the final night of the preliminaries. Last night’s emcee was Dena Blizzard, comedienne from New Jersey. She involved, off the cuff, us six judges. She said, ‘You know, it’s time for us to judge the judges. The judges get to sit here and judge everybody else.’ So we’re caught up in this, and we have to play along and there was only one thing we had to perform, and that is we all had to stand up on cue and dance — all six of us — and then the audience is going to vote as to which one of us was the winner. So I got up and I started dancing and I did the Jersey fist bump because that’s what she said she wanted, and I was doing the Jersey fist bump and I went kind of nuts there for 30 seconds. And, lo and behold, if I didn’t win it! I won the judge talent show last night, was called up on stage. The retiring current Miss America, Katie Stam, crowns the new Miss America on Saturday night, gave me a… They didn’t have a Mr. America sash, so they created one that said ‘Mr. New Jersey,’ and there was a picture of me wearing that and they couldn’t find a coffee cup named Rush so they got me one with the name Roy on it and gave me that. Katie Stam, the current Miss America signed it, and all the Miss America Pageant contestants are on stage. This is at the end of the night. So I just wanted you people to know: I won a talent contest here at the Miss America Pageant, but I was not competing against the girls.