RUSH: We’ve got the financial reform bill that passed the Senate. You know what this is like, folks? This is nonsensical. Nobody even knows what it means yet because the Congress here has surrendered all kinds of regulatory power to the executive branch. The Treasury secretary and the Federal Reserve get to write the rules here. There aren’t really any specific rules in the financial reform bill. We don’t know what it’s going to be. It’s whatever who’s running the show wants it to be. This is one of the reasons the market was down 376 points yesterday.

So we have the same people who have been saying for who knows how long, ‘You know, we gotta stop these cycles.’ Obama said, ‘We gotta stop these cycles, take risk out of it.’ The same people who have caused the cycles keep doing the same things over and over that repeat the cycles — and these are ‘the smart people;’ the quasi, the so-called smart people. State aid, unemployment, and shovel-themed investments now. It didn’t work the last time so Democrats want to do it again, and then they’re gonna add on the doctor fix to this. ‘On the spending side, the biggest single cost factor in the bill is the decision to devote close to $65 billion during the next 3&frac12; years to try to stabilize Medicare reimbursements to physicians.’ Now, as we pointed out in a Morning Update, it isn’t a panacea for the doctors. Whatever the new figure is is frozen in time.

It’s the same figure they get for five straight years. Now, we’re cutting. By definition to the Democrats, that’s a cut. So we don’t have the money. We do not have this money! Here are the specifics on the expanded benefits for the unemployed: ‘People who are out of work for long stretches would get expanded unemployment benefits through the end of the year under a bill the Democrats plan to pass next week. The bill would also extend, for a year, about 50 popular tax cuts that expired in January…’ What tax cuts? ‘That expired.’ Expired, ‘not will’ expire, but ‘expired in January.’ ‘The bill would be paid for, in part, by tax increases on investment managers and some U.S.-based multinational companies. In response to the BP oil spill in the Gulf of Mexico, the bill would increase taxes on oil companies by $10.9 billion over the next decade to finance the Oil Spill Liability Trust Fund.

They’re never going to run out! Now, I have to ask a question again. We’re a year and a half in for all intents and purposes. We’ve spent $700 billion on TARP, the Toxic Asset Relief Program. We’ve purchased General Motors and Chrysler. We have spent close to a trillion dollars ‘creating jobs.’ None of it has worked, from our perspective. There is no good economic news. Jobless numbers are up again as of yesterday. It hasn’t worked. Nothing that Obama is doing is working, from the standpoint of it being good for the country. Our foreign policy is such a joke now that Turkey, Brazil, Russia, China, and Iran are laughing at us. Just yesterday Ahmadinejad said, ‘Oh, yeah. We could destroy Israel inside of a week. Oh, yeah,’ and the response is, ‘You better not! Why, we might do sanctions on you. You better not.’

I hear many people in media say, as they report these kinds of stories, ‘I’m not going to get into motive. That’s for the kooks. I’m just reporting facts.’ The motive, my friends, you have to understand it if you’re gonna understand the depths to which we could plunge. Because this is not naivete, this is not accidental. This is not a bunch of theoreticians who are saying, ‘Just give us time. Just give us time. We know this will work. Our professors all our lives told us this.’ The things that are being done to this country are not being done to help it. The talk surrounding all these things is to convince people that the programs are great. To say that this is worse than Jimmy Carter’s presidency — yes, it is worse, but — that doesn’t even come close to describing what we’re experiencing. Jimmy Carter was a bumbling, stumbling fool. These people are bumbling, stumbling fools, but they know exactly what they’re doing. That’s the scary thing. They know exactly what they’re doing. They know we don’t have any money. They know that they’re not creating jobs. They know that extending unemployment benefits is not going to do anything toward job creation. They know that they are not providing incentives for small business and corporations to create jobs. They know all this.

RUSH: Harry Reid, Dingy Harry commenting, ladies and gentlemen, on the passage in the Senate of the financial regulatory reform bill: ‘Simply, the American people are saying, ‘you’ve got to protect us,’ and we didn’t back down from that,’ said Senator Reid. ‘When this bill becomes law, the joyride on Wall Street will come to a screeching halt,’ and in a way he probably doesn’t intend, he’s probably right. This financial regulatory reform law has a good chance of driving a lot of businesses out of this country, which means driving capital out of this country. The Democrats like Dick Durbin, Illinois, say, ‘This bill hearkens back to FDR. This is what FDR did. It’s the same kind of extraordinarily, wonderful, miraculous measures that FDR took after the stock market crash of 1929.’

He’s probably right, too, and what happened there was that the Depression was extended for 15 years because of what FDR did — and, you know, the Depression has two components to it. The second component of the Great Depression staggered starting in 1929 was a collapse of European markets, a collapse of European countries’ economies. It wasn’t just the stock market crash here. That was the first segment of the two segments. You can see it on a chart and a graph. The Great Depression had its life extended by virtue of the legislation Durbin’s referring to here that FDR imposed on banks and financial institutions, coupled with a collapse in Europe. It is eerie; it is eerie. And back then, FDR and everybody said, ‘We gotta do this to prevent another crash. We have to do this to prevent another stock market crash! We can’t keep having these crashes. We’ve got to stop this.’

So we keep doing it! The same type of people who believe the same kinds of things keep implementing the same kinds of policies, claiming that we gotta stop what’s happening. They’re the ones causing it! Now it’s gone global. Now we got the UN and European people talking about a global tax on banks and so forth. It wasn’t enough, ladies and gentlemen, to take measures to make the United States appear to be rock solid. No, no, no, no! Now we gotta extend this around the world. We’re bailing out Europe. The German parliament today is voting for another trillion dollars. It isn’t working, it never has worked — and yet ‘the smart people,’ the elitists keep doing the same things over and over again. They tell us, ‘Well, it may not have worked in the past, but that’s ’cause the wrong people were implementing the ideas. We’re now the right people.

‘Finally! We’re the ones we’ve been waiting for. Now the truly smart people are in charge, and it’s going to be fair. Everything’s going to be fair. We’re going to end unfairness. We’re going to end inequality in economic matters,’ and it’s going to be a disaster. This legislation is not going to stop any financial scams. What it will do is allow more government benefits to be showered on favorite financial firms who make the right political contributions. That’s the idea of this. As I look at this, I’m really stunned. People go to Washington to have power. That’s what they’re there for: To spend money, to get reelected. Yet, this financial regulatory reform bill is authored by one of the architects of the current financial malaise we are in: Chris Dodd! And Chris Dodd and Barney Frank are having a joint press conference today celebrating this? These are the people that caused this, particularly the sub-prime mortgage crisis.

They know nothing more about what they’re doing than if you were called up there to fix the financial system. You probably know more than they do because you’re probably more oriented toward free-market fixes rather than government-control fixes. So what’s going to happen here? They have surrendered power. Members of Congress have turned over the actual lawmaking or the rule-writing for this bill to executive branch officials: Treasury secretary, Federal Reserve. And everybody says, ‘Well, we’re going to end ‘too big to fail.” No, it’s just the exact opposite. They’re going to have the authority and the power to bail out whoever they want based on political considerations. This is a huge amalgamation of power in the executive branch, but it’s been surrendered to them by Democrats in Congress. Somebody’s going to have to explain this to me. I have my own theories that the agenda of ‘changing this country and making it right for once’ is a bigger idea, more important thing to do than holding onto individual little fiefdoms of power. 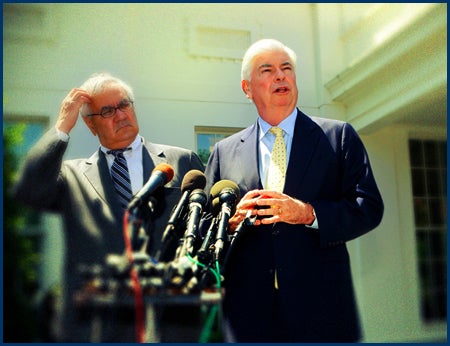 RUSH: Outside the White House, Barney Frank, Banking Queen, had a press conference with Chris Dodd after meeting with Obama about financial regulation reform, and this is what Barney Frank said.

RUSH: It’s exactly what I told you. The regulators, executive branch people, they can do whatever they want! They set the rules in this. It’s just a ‘framework…appropriate, innovative regulation’ to destroy whoever they want to destroy.

RUSH: And ‘white comedian Paul Shanklin,’ the vocal portrayal there as Barney Frank of Massachusetts.