RUSH: Here’s Obama. Another speech on the economy today at the White House. The president talking about the economy and jobs. It’s nothing new. We’ve heard it since 2008.

OBAMA: Growth won’t come from an economy where prosperity is based on fleeting bubbles of consumption, of debt. You can’t rely on paper gains. We’ve seen where that led us and we’re not going back. If we want to once again approach full employment and fuel real economic growth, then we need an end to the policies that got us here. We need to lay a new and stronger foundation on which businesses can thrive and create jobs and rising incomes.

RUSH: (sigh) Uh, well, it seems to me, Mr. President, that we have already laid this ‘new stronger foundation,’ yours, and it’s a disaster. We’re not going back? We’re gonna fuel real economic growth? We need to end the policies that got us here? You ended those policies a long time ago, Mr. President. The ‘policies that got us here’ are yours, and you haven’t ended your policies. Mr. Obama’s policies are the reason we are where we are economically. Let me remind you, I had this information last week. ‘It is about ‘Six Months Until the Largest Tax Increases in History — In 2001 and 2003, the GOP Congress enacted several tax cuts for investors, small business owners, and families. These will all expire on January 1, 2011.’ Now, you keep all that in mind when you hear what I’m going to say. 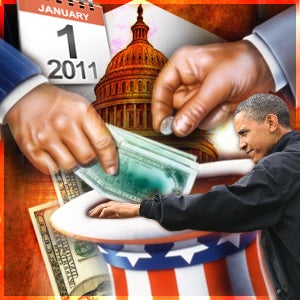 ‘The ‘Medicine Cabinet Tax.’ Thanks to Obamacare, Americans will no longer be able to use health savings account (HSA), flexible spending account (FSA), or health reimbursement (HRA) pre-tax dollars to purchase non-prescription, over-the-counter medicines. … The ‘Special Needs Kids Tax’ This provision of Obamacare imposes a cap on flexible spending accounts (FSAs) of $2500. (Currently, there is no federal government limit.) There is one group of FSA owners for whom this new cap will be particularly cruel and onerous: parents of special needs children. There are thousands of families with special needs children in the United States, and many of them use FSAs to pay for special needs education. Tuition rates at one leading school that teaches special needs children in Washington, D.C. (National Child Research Center) can easily exceed $14,000 per year.

‘Under tax rules, FSA dollars can be used to pay for this type of special needs education,’ but no more, starting in six months. Then there’s ‘The HSA Withdrawal Tax Hike. This provision of Obamacare increases the additional tax on non-medical early withdrawals from an HSA from 10 to 20 percent, disadvantaging them relative to IRAs and other tax-advantaged accounts, which remain at 10 percent.’ Then there’s a ‘Third Wave: The Alternative Minimum Tax … will ensnare over 28 million families, up from 4 million last year. … Small business expensing will be slashed and 50% expensing will disappear.’ All the while we are ‘laying a new and stronger foundation on which businesses can thrive and create jobs.’ So the money saved from depreciation and expenses will now go to the federal government in the form of higher taxes, leaving less money in the business to hire new employees or offer benefits and salary increases to existing employees.

In fact, ‘Taxes will be raised on all types of businesses. There are literally scores of tax hikes on business that will take place. The biggest is the loss of the ‘research and experimentation tax credit,’ but there are many, many others. Combining high marginal tax rates with the loss of this tax relief will cost jobs’ while we are ‘laying a new and stronger foundation on which businesses can thrive and create jobs.’ So basically what we have here is President Obama just lying again as he has been since 2008. On top of all of those taxes that I just mentioned we’re going to get the VAT tax, the value-added tax, like they have in Europe. We might even get a net worth tax. They might pass the first-ever-in-history wealth tax. (interruption) Well, I am saying it like it’s a fait accompli because that’s what this administration intends.

Of course, it will not be Obama who recommends it. It will be Erskine Bowles and Alan Simpson and their commission which will recommend it. Obama will say, ‘Well, we didn’t abandon the policies that got us here soon enough. We gotta pay the piper now, and the Republicans have been talking about reducing the deficit and paying down the debt, and the only way we can do this is going to have these new taxes, the VAT tax, a net worth tax like they have in Europe.’ That’s a tax on one’s wealth. After all the other taxes have been paid — after income taxes, after the new capital gains tax, after all of these other taxes — there will be a net worth tax, and it will be attached to people of $250,000 or more.

It’ll start small like a half a percent or a percent or whatever, and it will keep building and building and building, and this is all part of ensuring that nobody accumulates wealth anymore in this country. That’s where we’re headed. Fait accompli? Maybe not entirely. But unless the Republicans start talking about growth, economic growth and pointing out that Obama’s killing it, and saying that in no uncertain terms… Yeah, you can talk about deficits and debt. People get that. You don’t need to keep hammering that nail because it’s in the coffin. People already know that. Economic growth has to be the policy. Economic growth has to be the answer to what we’re having now, and none — none, absolutely none — of any of Obama’s policies will lead to any economic growth in the private sector by design. It’s not enough just to say, ‘Well, we gotta wait ’til this guy is out of office.’ If we’re gonna make an effort to win the House and perhaps the Senate, you’d better be prepared to use the power that we acquire.

I’m a little long. Take a break, come back, get more of your phone calls. There’s still three more sound bites of Obama’s economic speech. You’ve heard it all before. The man ought have zero credibility on anything he says regarding economics.

RUSH: Now, here’s another interesting tax increase that is effectively a tax increase coming in six months. ‘Charitable contributions from IRAs are no longer going to be allowed. Under current law, a retired person with an IRA can contribute up to $100,000 per year directly to a charity from their IRA.’ They get the deduction; the charity benefits. This contribution counts toward an annual required minimum distribution, but this ability will be canceled, this feature will be canceled January 1st of 2011. One more Obama sound bite. This is from this morning in Washington, as the president, who has destroyed the US private sector, speaks about it.

OBAMA: Some might argue that government has no role to play at all in our economy.

RUSH: Who says that?

OBAMA: Everybody in this room understands that the free market depends on a government that sets clear rules that ensure fair and honest competition, that lives within its means, that invests in certain things that the private sector can’t on its own. In the absence of sound oversight, responsible businesses are forced to compete against unscrupulous and underhanded businesses who are unencumbered by any restrictions on activities that might harm the environment or take advantage of middle-class families, or threaten to bring down the entire financial system.

RUSH: I don’t know where to start on this. You have an indictment of everybody in the private sector as a bunch of cheats, underhanded and unscrupulous, responsible businesses are forced to compete against them. Who is it that’s unencumbered by any restriction? The government. His regime is what is unencumbered by any restriction. His regime is the biggest stumbling block to private sector growth that it has ever been. The US government has never been the obstacle that it is today. The US government has never, ever been as big an obstacle to prosperity as it is today, and to listen to this pap is maddening, pure maddening. In France, the wealth tax, by the way, 1.8% of net assets. It is called the solidarity tax on wealth. All your assets, your net assets — meaning, after you’ve paid all your taxes — what you’re left with, there’s a 1.8% tax on that. It’s a tax on wealth every year, which we don’t have in this country.

We’ve never had a tax on wealth. The income tax, by design, is to prevent the acquisition of wealth, to certain limits. The income tax, the rising marginal rates, leaving you with less disposable income, that’s one of its purposes. It’s not primary to raise revenue. If it were to raise revenue, they would lower tax rates. That works every time it’s tried. It’s about control, it’s about loss of liberty, it’s about making as many people as possible dependent on government, not just for their needs, but also for their wants, ’cause people aren’t going to have the disposable income to handle all of that, and so you will vote for the party which provides those things for you and that’s what FDR and the Democrats have been setting up and executing for the last 50 years.

OBAMA: As I told other leaders of the G20, after years of taking on too much debt, Americans will no longer borrow and buy the world’s way to lasting prosperity. We alone cannot be the engines of economic growth. Furthermore, a strong and durable recovery requires that countries not have an undue advantage.

RUSH: What do those two have to do with one another? How do we have an undue advantage if we’re going into hock, as he says? Anyway, that’s your president, folks, that’s your future. We’re no longer going to be a leader in anything. We’re just a bunch of average ho-hummers.