We are the Mainstream, Not the Fringe

RUSH: All right, we keep hearing, ladies and gentlemen — and you heard it in the sound bites that we played from cable chat shows — that you and I, Christine O’Donnell, conservatives are out of the mainstream, that we are out of the mainstream. Everybody is talking about and wondering what the October Surprise will be. By the way, did you see this? I can’t describe — I mean I can describe it. I can’t show you on the radio, Dittocam. But the Democrats had a big, big announcement yesterday. You know what it was? They got a new logo. They’ve got a D inside a circle. Honestly. That is their new logo: A D inside the circle.

The circle is supposed to be an O, obviously, for Obama. It’s pathetic. But we keep hearing these people are the mainstream and we’re not. We’re kooks, fringe, what have you. 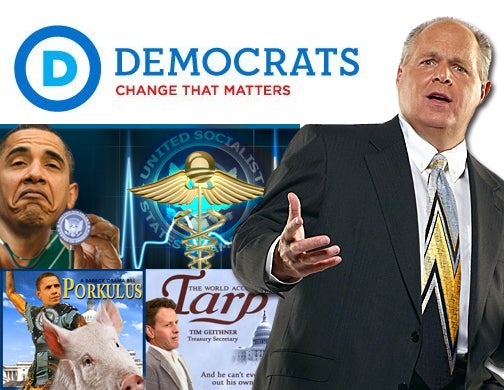 Let’s examine who is mainstream. Pick an issue. Pick an issue. Let’s pick Obamacare. The mainstream of America, the majority, is against it. In fact, there’s a Rasmussen poll out today: More Americans than ever before want it repealed. More Democrats are spending more money in campaign ads opposing Obamacare than they are spending money saying they voted for it. If the mainstream is the majority, and it is, the majority is dead set against Obamacare. The Tea Party is dead set against it. What’s the mainstream? The liberals, the people who are in favor of it are not the mainstream. They are the minority. They’re the fringe. We’re being governed — we’re being ruled — by, actually, very tiny minority.