RUSH: Kate in Fairfield. How are you, Kate?

CALLER: 1986, and I wanted to wish you a happy belated birthday. I remember when you turned 40, and you were so excited to turn 40 ’cause you felt like 40 made you legitimate, and here you are now at 60.

RUSH: No. No. They were exactly right in my case. It was after 50 actually for me.

CALLER: Liberals’ worst nightmare. I’m calling because of the AP story, front page headline in the Fairfield Daily Republic. It was talking about the $1.5 trillion deficit and how bad it was, and I thought to myself being schooled by you for 25 years, it’s going to be some kind of slam on the Republicans, and sure enough in the first paragraph, it talks about the Congressional Budget Office blaming this on the, quote, tax cuts of late last year, and I —

RUSH: In fact, I have that very story here in my stack, and you are exactly right. All it was was a continuation of tax rates. So whatever budget impact was caused by those tax cuts way back in the early 2000s it’s already been felt and over with. Whether there was increased revenue, which we know there was or not, there was no change in revenue generation because the rates stay the same, and yet there’s AP and the nonpartisan CBO trying to say that the deficit’s gonna be higher this year because the Bush tax rates were extended. You’re exactly right. I’m surprised that the Fairfield paper is still publishing.

RUSH: Good for you.

CALLER: Anyway, it’s good to talk to you, Rush.

RUSH: Same here, Kate, thanks very much. Twenty-five years. I was in Sacramento for three and a half years. I moved away from home when I was 20 to Pittsburgh, and that’s why I’m a Steelers fan because when I was there in the early seventies was when the dynasty there was forming, and they just captivated the town, you got caught up in it. From there to Kansas City, I was in Pittsburgh for four and a half years, maybe close to five, Kansas City for ten, Sacramento for three and a half, and in all three of those places, Sacramento, those three and a half years seemed like in a good way 10 to 15 years, because it was the first time — you know, broadcasting is a vagabond business. In the old days the way you progressed was to move to bigger cities. It’s not the case now. All you have to do is get a show, put it on a satellite, have two people listening and they say you’re nationally syndicated. But that wasn’t the case. You had to move from larger city to larger city to larger city and in the process you really don’t make any roots anywhere. You try, but at a moment’s notice you could either get canned or move somewhere else.

Sacramento was the first place I actually planted roots, civic citizen type roots in a place I had lived and those three and a half years they seemed like they were just yesterday. In fact, Kathryn and I watched a movie the other night. Have you seen The Ugly Truth with Katherine Heigl, whatever her name is. Now, that’s a chick flick and I don’t want to do any damage to my image here, but it was hilarious. (laughing) Parts of it were just hilarious. Part of it was filmed in Sacramento, it took place in Sacramento, and the opening of the film they’ve got flyovers, and I didn’t know it was in Sacramento when I started watching it. I knew nothing about the movie, and I’m looking, I said, ‘Whoa, that’s Sacramento, I used to live there,’ and I started pointing out the bridge and a number of other things. Kate from Fairfield would call once a week back then. She had special dispensation. She never wasted time on the phones. And every time I come out to California she finds a way to get through. Fairfield’s up not far from Sacramento.

RUSH: Norm in Minden, Nevada, you’re next on the EIB Network. Hi.

CALLER: I, too, have been listening to you since ’86. I think it was at a 20/30 Club organization meeting. You were there right after you started with the Sacramento affiliate.

CALLER: Yeah. So anyway I’m over in Nevada now, and I listen to you daily, and it’s an honor to speak to you. Listening to the health care exemption for businesses, I have yet to find that form anywhere that I could apply for to get exemption for my small construction company.

RUSH: I don’t think there’s a form. I don’t know that there’s a form. Well, it’s the government, there probably is. But you have to go through the secretary of Health and Human Services, that’s where you should go. If you’re really serious about this, call up HHS, and you tell ’em that you were listening to this program and that you heard about all the waivers that are being granted to the unions and to McDonald’s, and that you have a small business and you want to know if you can apply for a waiver and get it in order to continue to provide your employees health care, despite Obamacare, and see what happens. I’d like to know.

CALLER: Yeah. Well, I was thinking with your talented staff you might be able to locate that form, but I think if every small business got together and applied for the exemption from health care, it might help it get repealed.

RUSH: Well, we here at EIB Network and our talented staff, somewhat overrated on occasion, no doubt could come up with the form, but what good would that do you?

CALLER: Well, we could get it online and everybody would have instant access to it.

CALLER: Well, that would help, yeah.

RUSH: Yeah. All right. I thought so.

RUSH: Serving humanity as I remember by showing up, Rush Limbaugh. In Los Angeles, with the Limbaugh Institute for Advanced Conservative Studies.

San Francisco, this is Jim. Great to have you on the program, sir. Hello.

CALLER: Hello. How are you today? Thank you for taking my call.

CALLER: Excuse me. I’m a person that has a tendency to try and find logic in situations. In this new CBO deficit report, it doesn’t make sense to me because one, in order to know that there’s a deficit, don’t you first, number one, have to have a budget and they never passed a budget — 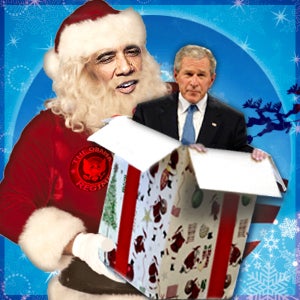 CALLER: Exactly. And so now they try and say because the Bush tax cuts were extended, therefore there’s additional budget deficit, but if there wasn’t a budget how is there a deficit and how do they blame it solely on that unless they had assumed previously that they were gonna recapture all that money, which seeing as how they never knew, how could they now say it?

RUSH: And don’t forget now, this is the beloved nonpartisan CBO. Nonpartisan. Now, as to these Bush tax rates remember, now, these things predate, they go back to 2001-2003. Whatever budget impact they have has long been on the books. There is no new budget impact by continuing those rates unless you fiddle around with baseline budgeting and raise it. If you are going to pretend that those tax rates were going to be sunsetted and go back up to 39%, for example, at the high end, if you’re gonna assume that, and you’re right, there’s still not a budget, if you are a gonna assume that and start making budget plans based on it and you figure the revenue you’re gonna get based on that increase, all of a sudden you don’t get the raised tax rates, you get ’em to stay the same, then you can say, oh, my gosh, we’re gonna be losing a bunch of tax revenue, but you were never gonna get it in the first place. And this is typically how the US budget is done. This is baseline budgeting to a T. In other words, every budget item is guaranteed an eight to ten percent increase and if it only gets four to five percent once they do the budget, then they claim a four to five percent budget cut, after an increase of four to five percent. So you’re exactly right, your logic has nailed this precisely.

CALLER: If they were only projecting one trillion, which still you’d have to have a budget, they would have to have already said we are assuming we are now capturing this money, which they never did.

RUSH: No. They never were going to capture it.

RUSH: They could only plan on capturing it but it was always tentative, and it was always based on the tax rates going back up. So you’re right, the money’s never been captured. They can’t lose what they didn’t get.

RUSH: But yet they write a report saying they are going to lose that money and therefore the deficit’s gonna be — it’s a total lie. It’s a total sham.

RUSH: You’re right. He’s right on the money. That’s Jim in San Francisco. The LA Times on the opinion page today: ‘The CBO Lays Out the Harsh Reality &hellip; The economy will push tax revenue up slightly in 2011 &hellip; The real culprits on the spending side are rapid increases in spending on entitlement programs, particularly Medicare, and on servicing the growing federal debt.’ And later in this story they talk about the revenue from the tax breaks. They’re not gonna (unintelligible) which will push the deficit — but really the main point is there isn’t a budget. So all of this is smoke and mirrors, all of this is irrelevant. They publish a report on the budget when there isn’t one.