RUSH: A federal judge has just ruled all of Obamacare void, unconstitutional. He has not said it may continue to be implemented under appeal. This ruling, ladies and gentlemen, demonstrates that we cannot tweak Obamacare. We can’t throw out the parts we don’t like but keep some things we do like and then build on that. Even a federal judge — a Reagan appointee, by the way, about which I’m gonna have more to say in mere moments. But this regime all of a sudden the last couple weeks loves Reagan, right? Obama’s out there as Reagan. He wanted to be Reaganesque at the State of the Union. The Drive-Bys are singing the praise of Ronald Reagan.

We need to remind everybody, this is a Reagan-appointed federal judge and that we are living not under a Reagan economy but Obama economy. Hooverville. Obamaville. So where are we? A federal judge has realized you cannot work this health care law without this mandate tax. He has seen it. There’s some brilliant, brilliant writing from this judge. Let me give you an example: ‘It is difficult to imagine that a nation which began, at least in part, as the result of opposition to a British mandate giving the East India Company a monopoly and imposing a nominal tax on all tea sold in America would have set out to create a government with the power to force people to buy tea in the first place.’

This is brilliant. It is commonsense simplicity equaling brilliance. ‘It’s difficult to imagine a nation which began, at least in part, as the result of opposition to a British mandate giving the East India Tea Company a monopoly in the colonies and then imposing a nominal tax on all tea sold,’ leading to the Boston Tea Party. ‘It is difficult to imagine that [the Founders] would have set out to create a government with the power to force people to buy tea in the first place.’

(New Castrati impression) ‘Mr. Limbaugh! Mr. Limbaugh! This was not about tea, and you know it. This was about health insurance.’

‘That’s not what it means, Mr. Limbaugh!’

With people like you in charge, Mr. New Castrati? Once you people get it in your heads that you can force us to buy health insurance, what’s to stop you from making us buy a stupid electric car?

That’s why this is unconstitutional, and there’s no implementing it while it’s under appeal. So where are we? What happens if Obama ignores it? Everything I’ve read from the regime says, ‘Eh, it’s an outlier. It’s surprisingly insufficient.’ They have objected to it every which way but legally. I have not read a legal response to this ruling from the regime. So if Obama ignores it, he’s defying a federal court. I can’t remember… Well, yes, I can. I was going to say, ‘I can’t remember when a president has openly defied a federal court,’ but Obama did via Ken Salazar with the drilling moratorium in the Gulf of Mexico, after the rig explosion out there.

But a president, an administration, openly defying a federal court ruling is an extremely serious constitutional crisis, whether the media thinks it is or not. Again, I just ask you: If Nixon had ignored the judiciary during Watergate, what do you think would have happened? Liberals woulda gone nuts about it. So is Obama going to uphold the law and comply with the Constitution, or not? Whatever court does down the road is beside the point. The ruling of the day is the law is unconstitutional; it has been voided. The regime must legally deal with this, and they will. If they ask for a stay, then they are acknowledging the ruling and admitting that they understand it. It doesn’t matter that it might be overturned later.

The law of the land right now is this is unconstitutional. We have three branches: Legislative, executive, judiciary. The executive cannot tell the legislative or the judicial what to do. This bunch thinks they can. Senator Chuck-U Schumer was asked about the three branches. I don’t know if he was serious or not. Some people think he was serious. He said, ‘You have the House, the Senate, and the president.’ I wouldn’t doubt if he were serious. We do know that this regime violated and ignored a federal court order on their drilling moratorium in the Gulf of Mexico. So we have an increasingly lawless president.

‘Did you mean to say that, Mr. Limbaugh?’

We have an increasingly lawless president. Look at his attack on the Supreme Court over Citizens United, plus his administration saying they’ll continue to implement this law. (CBS had that story last night.) What you see is a lawless, statist mentality — and, in this case, unconstitutional behavior — if the regime does not comply with the court. Plain and simple. Now the media is out attacking Vinson, the judge. They’re retracing his own history with our health care system, how he had to pay $700 cash or some such thing to afford the birth of his first child. As though there’s something criminal or corrupt or whatever. They’re doing their best. They’re not trying to defend Obamacare. They are going out and attacking the judge.

They never examine the history, the past of liberal judges. I think, folks, that we should proudly play up the fact that Judge Vinson is a Reagan nominee. The left now loves Reagan. They’ve been invoking Reagan since the buildup to Obama’s State of the Union show. ‘He’s Reaganesque! He’s been reading all about Reagan! He tried to sound Reaganesque on the economy in the State of the Union show.’ Obama loves Reagan now. So I assume that Obama would love the judges that Reagan appointed. Vaughn Walker, the judge in San Francisco who ruled for same-sex marriage, was also appointed by Reagan; they love him. Sandra Day O’Connor was appointed to the US Supreme Court by Reagan; they love her.

I would assume if they’re going to be consistent, that they will looove Judge Vinson. I think also… Didn’t this regime ignore a law regarding Arizona during the Arizona illegal immigrant law? I have to double-check that. But I think it’s good. We should encourage the State-Controlled Media to identify who appointed this judge, because not only was this judge’s decision brilliant and courageous, most people agree with it. We should be shouting this from the rooftops. Two-thirds of the American people don’t want Obamacare. Two-thirds want it repealed. Here comes a judge who is on the side all of significant majority. Proudly proclaim his name: Judge Vinson! Proudly proclaim who nominated him: Ronald Reagan!

Brilliant decision. Reagan judge! Reagan judge! This Reagan-appointed judge upheld the Constitution, struck down Obamacare. It’s great for conservatism. People on our side who believe the era of Reagan is over, you can slink away now and come outta your hole in a couple of weeks. For now the era of Reagan is alive and well and may have saved the United States from a transformation into pure, utter socialism. Long live Ronald Reagan and long live Judge Vinson, and long live all of Reagan’s appointees. Two-thirds of the American people agree with the judge. The administration loves Ronald Reagan all of a sudden. We should mention Ronald Reagan appointing this judge as often as John Kerry’s Vietnam service is mentioned, which is every time his name is mentioned. Let the people know who stands with the Constitution and who does not. 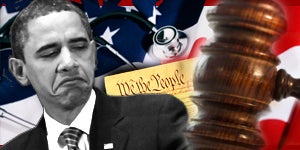 A lot of support articles today for the monologue I just presented, the Morning Bell at the Heritage Foundation just has a fabulous review of this ruling and what it all means. What you really need to know is that there was some erroneous original reporting that said the regime can continue to implement while they appeal. They cannot. This law has been voided. It has been ruled unconstitutional. And I heard earlier today that Obama is sequestered behind closed doors today, not having any public meetings for most of the day. It is said that he’s meeting with advisors over what’s going on in Egypt. Ha. I don’t believe that for a minute. There may be some of that going on. I think there is abject panic over this ruling. For crying out loud, folks, you know it as well as I do, this is the linchpin, this is the foundation of the new America. They were hoping to sneak in this ability the federal government mandate people have something by virtue that not have something and that once it’s been established that it’s constitutional you have to buy health insurance or face a penalty or maybe jail time, where would it be constitutional to say that they can’t make you buy a gun? What if some Republican regime comes along next time and says you gotta have a gun? It’s sophistry to think that anything of the sort is in the Constitution.

I’ll tell you Judge Vinson’s reference to the original Tea Party was really a great poke in the eye for the Democrats and the media. I mean he coulda cited any number of examples, but I mean to take that one, I mean that was just ng, ng, ng, ng, I’m gonna jam this in the nearest orifice I can find and I’m not stopping ’til I hear a lot of pain, ng, ng, ng, ng. As we know, this bunch hates the founding. Well, they don’t hate it; it’s a problem for them, rhe whole notion. If you can mandate that anybody or everybody buy health insurance, what’s to keep President Palin and a Republican Congress mandating that you buy a gun and that you shoot caribou with it?

RUSH: Ladies and gentlemen, about what a ‘teachable moment’ Tucson was, even when it wasn’t teachable moment. My question is: Why aren’t we hearing what a teachable moment these Middle East uprisings are — or are they teaching the wrong lessons? The dangers of runaway power and unresponsive governments. This is what our regime is telling us we need to learn. This is what happens when you have an unresponsive government, runaway power. They could be talking about themselves. They say Mubarak hasn’t listened to his people. Really? (chuckles) Is this regime listening to us? We don’t want and have never wanted their health care.

You remember how so many of the Democrats refused to even go to public events or attend town halls during the last campaign. They didn’t want to hear from their constituents. So let’s hope this is a lesson. Here’s another passage, by the way, from Judge Vinson’s ruling voiding Obamacare, making it unconstitutional. ‘I note that in 2008 then Senator Obama supported a health care reform proposal that did not include an individual mandate because he was, at that time, strongly opposed to the idea, stating, ‘If a mandate was the solution, we can try to solve homelessness by mandating everybody to buy a house.”

Judge Vinson put this in the ruling, and Judge Vinson is right. Obama opposed a mandate. Do you know why? Because Hillary Clinton was for one, and during the campaign he was trying to distinguish himself from her, and when she came out for the individual mandate, he reamed it. He obliterated the whole point of a mandate. He said we can’t do it that way. That’s not the right way to go about it. We need to do it in other ways. The words of the framers. Obama’s a constitutional scholar, folks; he taught constitutional law. More properly, he taught how to subvert the Constitution to a bunch of ACORN types when he was in Chicago.