Oil is the Energy of the Past?

RUSH: He said it, folks, he actually said that oil is the energy of the past. We are in big, big trouble if this guy — well, not if he believes it. We know he believes it. He’s got a seven-year oil drilling moratorium in the eastern Gulf of Mexico. It got the story from last December to prove it, a

seven-year moratorium. He is the one making oil the energy of the past. With this upheaval in the Middle East, who knows how that bodes for future oil production.

You know, I’m an aviation buff, folks, and I notice that Boeing just announced a stretch version of the 747. It’s the longest jet in America. Well, the longest jet in the world. It’s not the biggest capacity. The A380, the Airbus, still holds more passengers. Now, why would somebody be expanding their line of jet aircraft if oil is the energy source of the past? All kinds of manufacturers are introducing new jets to the market, and what do they require? That’s one of the things I always look at when I balance news reports about the finite oil supply, we’re gonna be running out soon, we better get going on the windmills and the sun. Okay, well, the people who are in business and investing a lot of money hoping for a return are investing in products that use a lot of oil and its refined derivatives, such as kerosene, jet fuel. General Dynamics is making a new business jet, the Gulfstream G650, the G650.

By the way, get this. They just had a test flight of that mama. That thing rolls off the assembly line, the first one in 2012. They’ve got five or six of them flying around up there doing test flights. They just had a test flight from Long Beach, I think, to Savannah, Georgia, coast to coast, left to right, obviously had tailwind. They did that flight in three hours and 30 minutes. They got near the speed of sound with some new efficient engine, the Gulfstream G650. Oh, yeah, jet fuel, much more expensive than gasoline, much more. Well, traditionally it is. Five or six bucks a gallon now versus three, something like that. But the point is if you manufacture a product that gulps the stuff, and we’re running out of the stuff, and if the stuff is the energy source of the past, why are you building new airplanes? Why are you designing new engines that use the stuff? Why are people pouring money into these? It’s not the energy source of the past but this guy wants to make it that. Why? What in the world? This is petulance. It is classic, uninformed, incompetent left wing stupidity that oil is the great polluter of the world. I mean, oil, the free flow of oil at market prices, is the fuel of freedom. It’s the fuel of the engine of freedom, for crying out loud, we got a guy now here undermining it. I don’t care if he’s doing it on purpose.

RUSH: Now, as to oil, ‘the energy source of the past,’ he says. I have a story here by Jonathan Fahey, the energy writer for the Associated Press: ‘New Drilling Method Opens Vast Oil Fields in the US.’ I’ll give you some quotes from the story. ‘Unemployment in North Dakota has fallen to the lowest level in the nation, 3.8 percent — less than half the national rate of 9 percent. The influx of mostly male workers to the region has left local men lamenting a lack of women.’

That’s how many guys are showing up in North Dakota to work. ‘Convenience stores are struggling to keep shelves stocked with food.’ Have you heard about this? Are you aware of any of this? Well, the reason is they found a new way to extract oil from the Bakken fields, and ‘Within five years, analysts and executives predict, the newly unlocked fields are expected to produce 1 million to 2 million barrels of oil per day, enough to boost U.S. production 20 percent to 40 percent,’ until Obama hears about it and puts a moratorium on it because it’s, supposedly, ‘the energy source of the past,’ or because it’s too dangerous.

‘The U.S. Energy Information Administration estimates production will grow a more modest 500,000 barrels per day.’ ‘A new drilling technique is opening up vast fields of previously out-of-reach oil in the western United States, helping reverse a two-decade decline in domestic production of crude. Companies are investing billions of dollars to get at oil deposits scattered across North Dakota, Colorado, Texas and California. By 2015, oil executives and analysts say, the new fields could yield as much as 2 million barrels of oil a day — more than the entire Gulf of Mexico produces now,’ which, half of it is now under a drilling moratorium for seven years. We’re talking the Bakken field among other places. 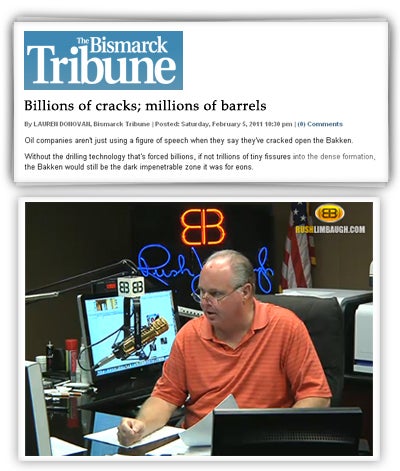 RUSH: Let me give you just a few details on this new drilling technique that they’re using in the Bakken oil fields in North Dakota. I mean, really unemployment is 3.8% and there’s a shortage of women because of all the male employees trooping in there to North Dakota. They can’t keep convenience store shelves stocked because of so much economic activity. This is from the Bismarck, North Dakota, Tribune: ‘Oil companies aren’t just using a figure of speech when they say they’ve cracked open the Bakken. Without the drilling technology that’s forced billions, if not trillions of tiny fissures into the dense formation, the Bakken would still be the dark impenetrable zone it was for eons. A process call ‘fracture treatment’ has transformed North Dakota’s oil producing profile and the oil patch itself.

”Fracking’ is as a big a business as drilling and a half-dozen or more companies are set up in North Dakota, commanding somewhere north of $3 million for each frack job.’ There are a bunch of stories about this. The bottom line is oil is not ‘the energy source of the past.’ It is the energy source of the present, it is the energy source of the future, and there’s nothing that Obama can do to change that. He may talk a big game about it, he may invest with all these corporate cronies that he’s getting in bed with to invest in all this wasteful, useless, not-gonna-amount-to-a-hill-of-beans ‘green technology.’ But, meanwhile, the people who make the country work — the people who count, the people who roll up their sleeves to provide this country what they need — go where the market says go, and that’s oil and petroleum.

And there’s nothing wrong with it. It is not eeevil. It is not deadly. It’s not, by its very existence, a poison. This is just irrational to be attacking something like this. It’s no different a commodity than water. It is produced naturally. It’s part of the planet. It’s as much as anything else is a part of the planet, and we have had people find a way to harness it that changed the way Americans and people live all across the world for the better. And it’s insulting to my intelligence and everybody else’s to have this commodity, this substance attacked as some form of evil by a bunch of know-nothing, do-nothing, never-got-their-hands-dirty-or-fingernails-dirty, little lame leftists here who live in their theoretical utopia — and while they try to implement this, they do real harm and real damage to real people and their lives.

RUSH: Jose in Miami. Welcome, sir, to the EIB Network. It’s great to have you here.

CALLER: Hello, Rush. It’s a privilege to speak to you. I just wanted to mention or just bring up the issue of the moratorium in the Gulf. As I understand it, a court in Louisiana held the administration in contempt of court for, I guess, keeping the moratorium in place. What’s happening with that? Why are we not drilling?

RUSH: You’re right, the government has been held in contempt, but they don’t care. It’s like the health care law’s unconstitutional. They don’t care. They’re still implementing it. Yet you refer to this regime as ‘lawless’ and media analysts go absolutely bonkers. Let’s go here. The New York Times very happy, by the way, in this story. This December 1st of 2010. Headline: ”US Halts Plan to Drill in Eastern Gulf.’ ‘The Obama [regime] announced yesterday that it had rescinded its decision to expand offshore oil exploration into the eastern Gulf of Mexico and along the Atlantic Coast because of weaknesses in federal regulation revealed by the BP oil spill.

‘Interior Secretary Ken Salazar said that a moratorium on drilling would be in force in those areas for at least seven years, until stronger safety and environmental standards were in place. The move puts off limits millions of acres of the Outer Continental Shelf that hold potentially billions of barrels of oil and trillions of cubic feet of natural gas. … The decision essentially reverses the much-disputed drilling plan announced in March, which would have initiated environmental studies and exploration activity…’ So the moratorium has been declared, what, unconstitutional or what have you, the federal judge has found them in contempt, and yet they continue.

Because, you see, oil is an energy source of the past. I don’t know what to tell you. I don’t know. I don’t know what’s being done legally to get the regime to fall in line, but they’re in contempt. The health care judge, Judge Vinson, said that his ruling was, in effect, an injunction. He did not issue a separate injunction because he said he didn’t think he had to. He thought the regime would abide by his ruling, his ruling being the law. They’re not abiding by it. But in the drilling moratorium, there was actually an injunction against the regime, which they are ignoring, which is why they have been found in contempt.

CALLER: Thank you. Good afternoon, Rush, and dittos to my favorite microphone Marine.

CALLER: You haven’t heard that in a long time, have you?

RUSH: Love that: ‘Microphone Marine.’ Thank you very much.

CALLER: Yeah, I called about Obama’s comment earlier, the energy source of the past.

CALLER: And I’d like for him and the other Democrats and liberals to set an example for us and give up oil, gas, and coal and anything that comes from those. See how far they go.

RUSH: It’s an excellent point. Where’s the leadership on this?

CALLER: Anybody that’s listening to us, if you look around, there’s not anything that you can see unless you’re out in the wilderness and butt naked that didn’t come from oil, gas, or coal in one way or another.

CALLER: You know, their windmills, their solar panels, their electric cars, their batteries — I remember a few years ago you had a guy call in and he was in the tire business, I believe, and he said at that time, I think it was seven or eight quarts of oil go into every tire that’s made.

RUSH: How many gallons of oil does it take to power the electric car with a backup gasoline engine when your battery dies? Exactly. Good point. Where is the leadership from these people showing us the way, showing us how to live without oil? Show us. Show us how it makes your life better. Show us how the White House runs more efficiently without it, yeah. I like it.