RUSH: In Wisconsin, the news media and the rest of the Democratic Party are all up in arms over the Wisconsin Supreme Court election. It turns out the initial numbers, which were reported by AP, as a courtesy, were not correct. Did you hear about this, Snerdley? It turns out that the Republican Justice David Prosser is actually more than 7,800 votes ahead, which, of course, has infuriated the media. They thought they had this thing safely stolen, and then this clerk in Waukesha County forgot to count 14,000 votes. I read this and I said, “It’s about time we got in this game.” Normally it’s the Democrats that are uncovering votes that they missed. And look at how the Democrats in the media are running around acting like stuck pigs. And they want an investigation of this woman. The problem is that this Republican clerk had a Democrat take a look everything she was doing all along the line and the Democrat said, “I’m sorry, but everything’s legal here. Everything’s aboveboard.” That woman’s chances for advancement in the Democrat Party are now kaput, (raspberry), bye-bye. But she said everything the Republican clerk did was legal.

There are some people upset that this incompetence on the part of the Republican clerk doesn’t actually help, that it creates some of the controversy. I understand that. We could deal with that perhaps later in the program. But still, when I saw this, I have to tell you, all right! Just yesterday I gave a big monologue in how we’re gonna have to learn to play the game the way they do, and, voila! Voila, we find 14,000 votes — and ours are legitimate. So Justice Prosser way ahead by more than 7,800 votes, the media going after this poor county clerk who didn’t include one city’s counts in what was sent to the AP. Now, never mind that there is no law saying that the AP should be told about the preliminary vote counts at all. They just do this as a favor to AP. Never mind that the AP should have noticed that the city’s numbers were far too low. There was something about this that should have raised a red flag. But the bottom line here is the AP, the Democrats are furious that their candidate, Kloppenburg — you know, I normally don’t comment on people’s names, but Kloppenburg, doesn’t it sound like something you’d step in? Well, she did. She did step in it with a big victory speech out there and — (interruption) oh, yeah. I mean they even got mock Harry Truman headlines, graphics on the newspapers.

Anyway, AP, Democrats furious that their candidate, Kloppenburg, they declared her the winner when she was a whopping 204 votes ahead, by the way, an insurmountable lead, of course, when you’re the Democrat and you have a 204-vote lead. It’s gonna be hard to find enough votes to make up the difference, but they’re going to try. They’re gonna bring in the Al Franken lawyer. They’re gonna bring in the same lawyer that found the votes for Christine Gregoire in Washington and the same lawyer that found the votes for Franken in Minnesota. They’re gonna bring in the same guy into Wisconsin here. So naturally the media is now doing everything they can to discredit the evil Republican county clerk, even though Democrat officials, as I said, have been looking over her shoulder every step of the way so that everything’s been done completely on the up and up, but a scapegoat must nevertheless be found.

RUSH: “A conservative incumbent surged to a commanding lead in Wisconsin’s hotly contested Supreme Court election Thursday, after a predominantly Republican county’s clerk announced she had incorrectly entered vote totals in the race seen as a referendum on GOP Gov. Scott Walker’s divisive union rights law. Waukesha Clerk Kathy Nickolaus is a former Republican staff member in the assembly Republican caucus. … Nickolaus has been criticized by the Waukesha County Board for her handling of past elections and lack of oversight in her operations.

“‘There is a history of secrecy and partisanship surrounding the Waukesha County Clerk and there remain unanswered questions,’ Scot Ross, director of the liberal group One Wisconsin Now, said in a statement.” Now, needless to say, One Wisconsin Now is a radical, leftist 501(c)(3) tax-exempt “charity” hell-bent on putting liberal Democrats on the Wisconsin Supreme Court. They are also major opponents of Governor Walker’s reform initiatives, despite the IRS prohibition against lobbying by 501(c)(3)s. The bottom line is they had a Democrat looking at this every step of the way and it’s all legit, and the Democrat said so.

But that still doesn’t matter. They are still fit to be tied. You know, the Democrats do not like to have tables turned on them this way. They do not like their own tactics when are they used against them. In fact, the Reuters headline: “Ballot Find Threatens to Upend Wisconsin Election.” Notice when not all the ballots were counted, we had a legal result. Now, according to the Reuters, when some ballots were found, legally cast ballots, all of a sudden the election is upended.

“Officials in Waukesha County on Thursday said a final review of paperwork and records from a closely watched Wisconsin Supreme Court election uncovered thousands of uncounted votes, a potentially stunning development that could upend the contest.” No, it wouldn’t “upend” it. It would decide it. There was no finality to this! There were 14,000 votes that were not counted that were found. “Unofficial returns on Wednesday gave the union-backed challenger, JoAnne Kloppenburg, a narrow 204 vote statewide lead over Republican David Prosser.

“But late Thursday, the county clerk in Waukesha, a Republican stronghold, said that votes not included in earlier totals had resulted in a net gain of 7,582 votes for Prosser.” My gosh, my friends, how dare — how dare! — these votes “threaten to upend” the Democrat victory? How dare the state of Wisconsin snatch defeat from a tremendous victory for the Democrats and their media minions! Meanwhile, the AP (and they are the real culprits in this story) is also decrying the upending of their victory. “Ballot Error Threatens to Upend Key Wisconsin Supreme Court Election.”

Now, despite the claims of the AP and despite claims from Reuters, the Republican clerk in question here, Ms. Nickolaus, did not incorrectly enter any votes. In addition she did not fail to count any votes. She did not misplace any votes. No ballots were found that had been overlooked. The votes were counted correctly and documented correctly in the formal certification process. The only error came when this county’s votes were not added correctly for the unofficial results given to the AP on Tuesday night.

The reformatted report from Brookfield did not end up in the early votes summary the county prepared for the news media, and that’s where all this all really lies. The news media’s preliminary report did not have these counts — and because they didn’t get these counts, all of a sudden now there’s something suspicious here. But no votes were ever misplaced. They just weren’t reported correctly to AP. But they were reported correctly to county officials for both Democrats and Republicans — which, after all, is what matters! But there’s still gonna be hell to pay. You watch. It’s gonna be fun. 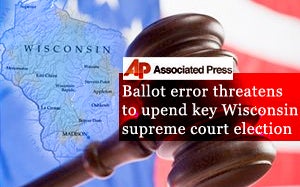 Now, conspiracy theories about what happened here, you know that they’re gonna blossom and bloom all over the Internet. But again, Ramona Kitzinger, the Democrat on the Waukesha County Board of Canvassers says she’s satisfied the new numbers are correct. But it’s not over yet. It’s not over yet. The margin may now show that David Prosser is ahead by over 7,000 votes, but the legal wrangling could be just beginning. The challenger, JoAnne Kloppenburg, will almost certainly pursue a recount because of the perceived irregularity here.

Now, just a brief aside, this 7,000-vote margin, frankly, makes sense if you look at the November results. If you look at all of the news media education that took place during this battle with the where the Democrat senators fled. I mean, people just don’t change their minds on a dime like this. The idea that this Democrat challenger could win this Supreme Court race or even be that close didn’t make any sense here. Even when we learn that the unions spent $3.5 million on television ads and everything else. So the 7,000-vote victory margin makes all kinds of sense.