Is Obama an Essential Employee?

RUSH: How many of Obama’s czars are gonna be sent home as nonessential employees if there’s a shutdown? How many of the White House limo drivers will be considered nonessential? How many people who clean for the Obamas, who buy their clothes, who wash their clothes, who make their sandwiches, who tend the organic garden will be considered nonessential and sent home? Will Obama forgo his salary? Will he stop flying around in Air Force One? Will he stop the concerts and the golf and the basketball if the government’s shutdown? Hell, no! None of this is gonna impact him at all.

Let me ask this. Given Obama’s lax approach to all of this, farming it all out — at the negotiations, he sits there, “I expect an answer in the morning!” while he goes off to meet with the Reverend Sharpton and chow down on soul food. By the way, I saw a picture of that. I saw a picture of Obama chowing down on soul food and Sharpton is looking at him like he can’t believe what he’s seeing, like he’s looking at someone from Darfur eating for the first time in a year.

Another Caroline Kennedy, yeah. Sharpton took Caroline Kennedy up there to Sylvia’s, and Sharpton knows you don’t eat when there’s a camera around. You just don’t put anything in your mouth and chew it. You just don’t do it. But Obama was wolfing down whatever, and Sharpton was looking at him with eyes wide and could not believe what he was looking at. I saw the picture. I saw it. I saw it yesterday. Anyway, his attitude has been very lax, very laidback, except now when he’s holding a couple of meetings to seem like he is the savior in all of this. “I expect an answer in the morning.”

My assertion is that Obama’s not even essential to any of this! Obama hasn’t been involved in any of this. He’s been sitting up there in the ivory tower issuing commands, demanding this and expecting that. We need to ask if he is considered an essential or nonessential employee of the federal government. Just by the virtue of the way he conducts himself. How many of the people on Moochelle’s staff will be sent packing? She has a staff of 24, did you know that? Moochelle Obama has a staff of 24. I know a lot of you are probably offended. “What do you mean? You don’t talk about the president that way, Rush. You don’t ask questions about whether the president is essential or not.” Well, how essential can he be, taking a vacation every two weeks? I guarantee you this. If you work someplace and they let you take a week or two vacation every four weeks or so, I guarantee you they wouldn’t look at you as essential.

RUSH: Marlene in Bellaire, Michigan, hello, and welcome to the program.

CALLER: Oh, my goodness, what an incredible honor this is.

CALLER: I’ve been a student there for about 18 years now and I have a make-the-host-look-good question.

CALLER: Well, you’re the only one that can answer this one, I’m convinced. You and I are both convinced that Obama, most of what he does or all of what he does is contrived. I mean he’s planned it out. And he does everything on purpose for some reason or other.

RUSH: You know, that is an excellent question. And you’re question comes from a belief. Okay, we’ve got a president who, for whatever reason seems intent on restructuring this country and turning it socialist. He’s got some animus against free market capitalism. Why? And how does he get people to go along with it?

RUSH: They’re all over the place. He doesn’t have to convince them. The reason he’s got czars is because they are exactly who he is. Kathleen Sebelius is Obama. Eric Holder is Obama. That’s why he has chosen them. I laugh, you know, when news comes up about this guy Van Jones being a communist, how can Obama pick this guy? He knew it. The country, bottom line, has no shortage of people who don’t like the country as currently structured.

RUSH: And they’re all over the university community. They’re all over Harvard and Yale and that’s Obama’s stomping grounds. He’s got advisors who can point him to people who have the same sympathy. Look, it’s not a rare point of view on the American left to have an animus toward this country as founded. It’s not rare for leftist Democrats to be anti-capitalism. It’s fairly common.

CALLER: It’s a wake-up call for everybody. Most Americans, we can understand, you know, the day-to-day arguments between liberals and conservatives and Democrats and Republicans and all that, but most of us have a tough time getting our arms around the fact that there are Americans, that there are people born here who hate this country. But there are, and there are a lot of them. When I say a lot, ten, 20%.

RUSH: It is very scary.

CALLER: That’s a scariest of all, Rush.

RUSH: But it’s the truth and you have to recognize it for what it is.

CALLER: Well, I think you’re absolutely right, like I say you’re the only one that could explain it.

RUSH: Let me tell you something. You’ve got some people in some of these bureaucracies that are even more radical than Obama. Look at the Ninth Circuit Court of Appeals. You’ve got judges —

RUSH: — you’ve got justices at various levels of our judicial system who are every bit as radical as Eric Holder or Obama. 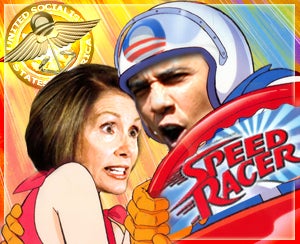 RUSH: I mean the short answer is —

CALLER: I am absolutely enjoying it more than you know.

RUSH: Thanks very much. I’m flattered. I really don’t plug it much but I’m glad that you did ’cause it really is encyclopedic, it’s an encyclopedic website.

RUSH: And furtherance to your question, keep in mind that it was not Obama who got to the White House and then picked everybody to go with him. The left picked Obama. He didn’t have to go seek them out.

RUSH: They picked him. You already had people who are the same frame of mind. You had Saul Alinsky, Cloward-Piven, who already believe in the things Obama does. They found him, some of these people in the media, they found him. He didn’t have to seek ’em out. David Axelrod and George Soros made Obama.

RUSH: There’s no question about it.

CALLER: You’re scaring me more and more all the time.

RUSH: Not that he’s a puppet, but at the same time he’s not a Bond villain. He’s not Ernst Stavro Blofeld with the little cat in the lap giving orders to Agent Number One to go out. He’s part of a committee. They chose him because they thought he was the one that could get elected, and they were right. What did they do? In Joe Biden’s own words, go find a clean, articulate black guy. Yeah, the Jeff Davis community. You go out, you find a clean, articulate black guy, and you know that the Republicans are not gonna dare be critical, first black presidential candidate. They’re gonna shut up. They’re gonna put duct cape on their mouths. McCain saw to it, and the rest is easy. And then any criticism whatsoever you simply throw the racism charge and you shut ’em up even further. It was very predictable. No, I don’t think Obama is the cat in Ernst Stavro Blofeld’s lap. He’s got a little bit more stature than that, but I understand the comparison.