RUSH: There’s all of these stories about what was discovered in the treasure trove of intel at Bin Laden’s house. And it’s a joke. It is an absolute hilarious joke. Now, the truth of the matter is, the British stopped tracking Bin Laden. They stopped caring about Bin Laden and anything to do with him years ago because their intel said even if he’s alive he’s not a factor. But since Obama Killed Osama, the word’s gone out to our media to talk about how relevant Osama was and how intimately involved in planning he was, and all the stuff that he had on the drawing board. A shameless effort by our State-Controlled Media to make it look like this was an even bigger and more important kill than anybody thought it was. Because this guy was still the mastermind, he was still numero uno, he was still a big kahuna, the grand pooh-bah.

“Some conservatives are critical,” and they’ve got a whole story saying: This is how we always do it; there’s nothing new here. They are dumbfounded why anybody’s scratching their heads over their rigged poll. They don’t think it’s rigged. That’s how they do it all the time. And they’ve got story after story building Bin Laden up. (summarized) “Oh, yeah, this guy, he was still in charge! Don’t give me this Khalid Sheikh Mohammed stuff. It was Bin Laden. Bin Laden was still running the show. He was calling the shots, he was doing all the planning, I was — I mean he was so involved, some of the younger Al-Qaeda guys are kind of ticked off that he wouldn’t broaden his horizons.

“He did nothing but hate America, and there’s a lot of other countries to hate, too, but Bin Laden only hated America! They wanted to branch out and hate a bunch of other places.” All of this, of course, is for the purpose of establishing (even more) the notion that only Obama was capable was understanding this and pulling off this mission — and, of course, all this intel that we found, this “treasure trove…” According to the latest leak of vital intel, which are the latest news reports on the raid, Bin Laden kept “a handwritten diary.” You saw that, right? Bin Laden kept a handwritten diary. Apparently, Osama Bin Laden woke up every morning and tried to figure out how to bring down America.

He sounds just like some people in the Democrat Party. Honestly. During the campaign of 2004 and the campaign of 2008, I said to Zev Chafets — Zev Chafets was writing that big book on me, An Army of One — “If everything I believed I heard echoed by people like Mahmoud Ahmadinejad or in a tape from Bin Laden, I’d be embarrassed!” If my stated views, if my stated opinions and policies for my own country I heard out of the mouths of Ahmadinejad and Bin Laden, I’d be embarrassed. They don’t seem to be bothered by it at all, which is why I say, “He sits down, and he writes ways to bring down America every morning in his diary? That sounds just like some people in the Democrat Party that I know.”

RUSH: By the way, folks, I thought about this. I don’t believe that Obama gave the kill order on Bin Laden. Somebody else had to do it, and I think I’ve figured it out. Kathleen Sebelius, I think, issued the kill order on Bin Laden. Look, Bin Laden was over 50, he needed very expensive dialysis because kidney failure was happening. It sounded to me like he was just asking for it! I don’t think they wanted to spend the money to keep him alive at Club Gitmo, so probably Sebelius and her death panel made the call.

RUSH: This is Reesa in Fort Wayne, Indiana. Nice to have you on the EIB Network. Hello.

CALLER: Hello. I could not wait to call you today after I talked to my daughter last night. She’s a senior in high school, and their class had a video conference with some students in Ghana, Africa, and the students in Ghana had to get on a bus and go 50 miles away to a village that had an Internet cafe, and they were supposed to discuss current events. So I asked her what they talked about, and she said, “Well, they all seemed to like Obama,” and I asked her why, and she said, “Well, they all liked the hope and change thing that he’s trying to do.”

RUSH: Wait a minute. These are these students in Ghana —

RUSH: — and they said they liked Obama because of hope and change? 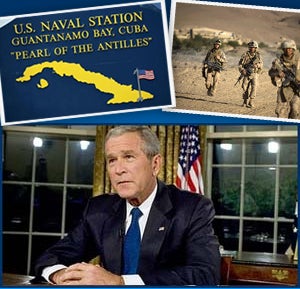 RUSH: What the hell’s he doing for ’em in Ghana?

CALLER: Well, then I asked her, “What else?” and she said, “They thought that he was taking too much credit for finding and killing Osama Bin Laden, because George Bush was mostly responsible for that.”

RUSH: The students in Ghana thought that?

CALLER: I was floored. I was, like, my God. Somebody’s (garbled). (laughing)

CALLER: They like President Obama, but they think he’s trying to take too much credit for finding and killing Osama Bin Laden. So…

RUSH: Yeah, I get that but it sounds like a disconnect. I mean, how can you like the hope and change business but then not like the fact that he’s taking all the credit for killing Osama?

CALLER: I think it’s just obvious to everybody except the press in the United States that George Bush put that mechanism in place for hunting down terrorists.

RUSH: Well, look, if you want to believe that, far be it for me to stand in your way. I do think it’s important to point out that the Obamas went to Ghana back in July of 2009, and more than likely if any of these kids were aware that Obama was there or maybe even saw him they’re gonna have some kind of connection. That’s where the hope and change is. They probably heard him make some sort of comment about it. But that still nevertheless is interesting, they think Bush had more to do with capturing Osama than Orambo.

RUSH: Well, what did your daughter think of all this?

CALLER: Well, she found it interesting, too, that they would think that, seeing as how they were Obama fans, and the way the press has been portraying it. It was kind of refreshing.

RUSH: Wow. Well, I’m glad you told us about that. I appreciate the call, Reesa. Thanks very much.