CALLER: Thank you, Rush. Jack Bauer dittos to you. I’ve been listening to you since the early 1990s, and I rarely miss a day. You’re a good man.

CALLER: I just was going to ask you about ’24,’ but before I get into that, if I could just maybe make a request, not for today, but in the future, if you could do more frequently your voice of the little kid coming home from school, it just kills me.

RUSH: The little kid voice that I do?

CALLER: The little kid, ‘Mommy, do you know what they taught us today? Ozone is disappearing.’ That kills, Rush. It just kills.

RUSH: (Laughing – doing kid voice) Mommy, mommy, mommy, I was listening to Rush at school today. What is pulling the goalie?

RUSH: (Laughing.) Well, you’re very kind. I appreciate any and all compliments on my little attempts here to impersonate people. 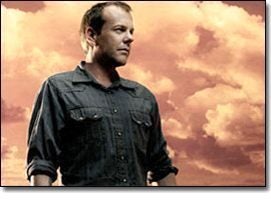 CALLER: Oh, that’s by far, that has me rolling every time. Hey, what do you think of ’24’? I told, I believe it was Mr. Snerdley, your screener, that I was on the edge of trying to decide whether I think ’24’ is jumping the shark or —

RUSH: That’s up to you, you’re the viewer. I mean if you think it is —

CALLER: Well, I want to know what you think. It seems other seasons, and I’ve been a long time viewer of it, other seasons I’ve literally been on the edge of my chair, watching as it winds down the last ten, 15 minutes of each show, and this season, I more just kick back, relax, kind of thinking.

RUSH: Well, you’re telling me you relaxed the last ten or 15 minutes of that show?

RUSH: Well, I don’t think they’ve jumped the shark. Here’s what they have said. You know, I know these guys.

RUSH: And, you know, things happen. You’ve got Joel Surnow and Bob Cochran that created the program. You have showrunner Howard Gordon, lead writer and one of the executive producers, and you’ve got a big writing staff, and as they produced this show and created this show and produced it over the years, it’s grown in popularity. And of course, their services for other shows are being tapped. They’re working on other shows for other networks. I can’t divulge any of this. There are pilots and so forth. But it’s just the natural progression of the TV business and they want to avail themselves of the opportunities. So I think their time has been a little bit split, but more than that, they have said that this was the toughest season to write that normally, as I’ve explained before, these guys, they’ll start filming season seven in late July or early August, and will probably start writing it in June, mid-June, although in this instance I think they’re already conceptualizing something entirely different because the problem they’re having this season is they’ve exposed every advent possibility of terrorism in the previous five seasons, and now this one.

So they’ve gotta go a different direction, and they’re trying to figure out what that is. I happen to know some of the things they’re considering, but I don’t know what they’re going to end up deciding, so I will not divulge any of it. But some of it, I think it’s gotta be a creative challenge. You’re right about this program. Every episode is like a two-hour movie, and they don’t storyboard this from beginning to end. They have their original concept and they write it as they go. Their creative juices have flowed, and it’s just something that’s happened. This year, their primary theme ran out in episode 20, the terrorist threat was dealt with episode 20. Now they’ve introduced something else in it in the last four episodes, first of the last four was last night. But no, they haven’t jumped the shark. When you jump the shark, that means the show’s over, it’s fini. They’re going to be back next year with an entirely different concept about this in a whole lot of different ways.

CALLER: Okay. Now, and I know other seasons they’ve ended with a single slot of a two-hour show. Now, there’s two hours left in this 24-hour day, is there not?

RUSH: I haven’t looked that far in the TV listings.

CALLER: All right. Okay. Just this season, just some of the workings within the show itself, you know, Mr. Big, the person you think is Mr. Big, you know, three episodes later he’s not Mr. Big, he has some mysterious —

RUSH: Yeah, this is one of the problems. Now, I’m not trying to make excuses, but one of the guys you’re talking about is the guy that played Kiefer’s dad.

RUSH: Let me tell you a little story about that. I went out in September of last year to shoot a pilot for The 1/2 Hour News Hour, and we did it on a Saturday morning, and when I got to the wardrobe department, the guy there, who is a big fan, was all excited because the actor James Cromwell was coming in for his fittings that afternoon, and they had to shoot Cromwell’s three episodes because he had another acting gig somewhere in Europe or something he had to go do. And so they’re working around the availability of actors and all sorts of things. I don’t want to give anything away, but he came back last night.

RUSH: As you noticed.

RUSH: Greg Itzin and Jean Smart, they were in a couple of episodes this year, and people said, ‘Oh, my God, they wasted them, why didn’t they give them more of a role?’ Well, they might be working on other things. Any number of reasons for this.

RUSH: When you have a program like theirs that’s almost created spontaneously, it’s really tough to do what they do, there are all kinds of limitations. They can’t go out and make excuses for this. They just have to work around it. Plus, don’t forget, don’t rule out the ongoing, ever-increasing popularity placing all kinds of demands on everybody in the production crew, the writing staff, and all this. They haven’t jumped the shark. I’m going on a bit too long here with the answer, but they haven’t jumped the shark because they’re going to be back next season. They’re going to be back with a whole new concept. They will admit to you this season has been tough and it hasn’t been what they wanted it to be. But don’t give up on it. Probably come back with a season next year to blow everybody out of the water. And, of course, you do a show like this for as long as they’ve done it, you create massive expectations, massive. I face this each day here on the EIB — imagine me, I’m in almost 19 years. I’m going to tell you, the performance pressure, oh ho, I’m not going to complain about it, but people that haven’t done it can’t relate to it.

RUSH: All right, I looked it up. ’24’ has three episodes left. One episode next week and a two-hour finale two weeks from last night. About this ’24’ jump the shark business, I don’t even think it’s possible for ’24’ to jump the shark, Jack Bauer would just jump in and kill the shark. So don’t worry about it out there, folks.