RUSH: I was wondering this morning when I got here to the EIB broadcast complex, I was wondering if the Democrats might be feeling as though they had opened up a Pandora’s Box. Did you hear about Ken Salazar? Ken Salazar, a senator from Colorado, wants to censure me? This guy, he might be smarter than we think. Now, I don’t know if he knows the Constitution. When is the last time, Senator Salazar, that you read the Constitution? You have no power to censure me or any other private citizen. Do you realize what a fool you sound like when you want to censure me? You’d have to make me a senator to censure me, and you might want to do that because then I couldn’t do the radio show. I’d have to take a pay cut, give up the radio show, and then become a senator. But if you did that, I would tilt the majority to the Republicans in the Senate. That’s the only way you can censure me. You can’t censure private citizens, even though you’re talking about doing it. But I do have an idea. 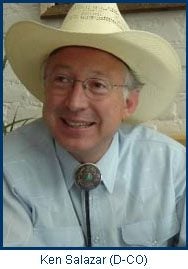 Senator, I will censure you. I will censure you for repeating lies about a private citizen! (laughing) I will censure you for being ignorant about the Constitution. You should be censured for being a fool. If we’re going to start censuring people, let’s start censuring John Kerry, and Jack Murtha, and Dick Durbin, and Harry Reid. These are the people talking down the troops. Let’s censure them! You guys need to focus on your own House there and your own Senate rather than focusing on me. Anyway, I was just wondering this morning if they might be feeling as though they’ve opened up a Pandora’s Box, because everybody now knows the background of Media Matters. Everybody knows that Hillary Clinton started it; she’s taking credit for starting it and founding it. Media Matters people are very nervous, they’re being asked about it. ‘Well, no, no, no, she really had nothing to do with it.’ So somebody is lying. Media Matters said she wasn’t involved; she said she is. This is no small thing.

This group was working under the radar, under cover of darkness, nobody in the general population knew much about them, and now the light of truth is shining on Media Matters and more people than ever before are aware of who they are and what they do because of this huge audience. So this cast of characters and their purpose is now being brought out into the light, and these people, to succeed, need to operate in the dark. Hillary has to be having major fits over all this information being subjected to greater scrutiny. There’s one thing else I don’t think the Democrats calculated when they started attacking me, and that is that they are framing the discourse in terms favorable to Republicans. In other words, in their false accusations that I insult the military, they are saying that it’s very bad to criticize the military. They’re saying it’s unconscionable to attack the military. And yet who actually is attacking the military? They are.

Would it be that it’s suddenly fashionable to be or claim to be pro-military? I don’t think this is what the far left had in mind. The far left, the kooks, the lunatic fringe, can’t be happy hearing these elected officials and these presidential candidates, not only say that there’s no way they can get the troops out of Iraq by the end of their first term, now they’re out there talking up the troops, talking up the military, trying to make themselves sound so patriotic. This is not what they had in mind when they started this. After the truth prevails in this situation, they’re going to be left in a position where it will be harder for them to pull off any Petraeus Betray Us type attacks because they’ll be going back and forth. You can call Petraeus, when he sits in front of you, a liar. You can question his authenticity; you can question his legitimacy, as opposed to just being a puppet for Bush. Then you can’t come out and start praising Petraeus and people like him and go back to once again ripping them. All of this is happening under a great spotlight, a great amount of sunshine, which is something I don’t think they intended.