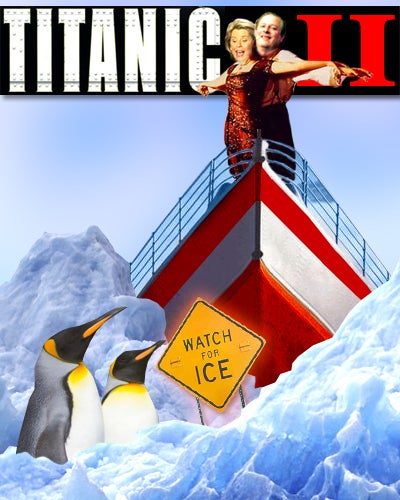 RUSH: I have to tell you a little story. Over the weekend, I had all the family in for Thanksgiving, and I was working at the same time. I’m on the computer, I’m checking to see what’s happening, and I saw this story about a cruise ship that sank in the Antarctic Ocean after hitting an iceberg. The details of this were that some people were out on a cruise in the Antarctic, and they hit an iceberg, they were all rescued and so forth. So I made a note of that, and I’d run across this story that I shared with you yesterday that humans looking at the universe are shortening its life, all that. So I went out, I met the family outside on the patio, and they said, ‘Anything interesting in the news?’ I said, ‘Yeah, there’s this cruise ship in Antarctica, a cruise ship, a pleasure cruise ship in Antarctica, and the thing sank.’ I said, ‘What do you bet, this is a bunch of environmentalist wackos on a global warming tour and they run into an iceberg trying to find evidence of global warming in the Antarctic,’ and we all got a big laugh about it. Of course, I was just speculating. But do I know these people or do I know these people? Even when I make jokes about them, I am right.

From the Canada Free Press today: ‘You’d never read this in the mainstream media: The owner of MS Explorer that sank, leaving a huge carbon footprint at the bottom of the Antarctic Ocean Friday is an acolyte of teensy-weensy carbon footprint crusader Al Gore. G.A.P. Adventures CEO and Explorer owner, Bruce Poon Tip and Gore have similar ideals, ‘filling their schedules with speaking engagements on environmental change to educate global audiences.’ And that’s straight off of their website. In fact, as recently as last April, both Poon Tip and Gore gave presentations at the Green Living Show in Toronto. ‘I expressed my admiration for Mr. Gore’s commitment and leadership which spans more than 20 years,’ commented Poon Tip. ‘I also invited him aboard our legendary polar expedition ship, the MS Explorer to visit the Arctic.’ The legendary polar expedition ship… ‘had at least five faults at its last inspection,’ according to Greenpeace spokeswoman Bunny McDiarmid. ‘Maritime records show the MV Explorer–” anyway, it was a bunch of eco-warriors. I was exactly right. There were 154 passengers, and a lot of them were eco-warriors, and they were out there doing a global warming cruise.

How about this, here are a bunch of eco-warriors on a global warming cruise in Antarctica. What kind of an idiot would take a cruise to the Antarctic Ocean, a pleasure cruise? But these are eco-warriors, and they’re out there, and they’re looking for evidence of global warming, and they get sunk by an iceberg, Titanic 2. It just doesn’t get any better than this. These eco-warriors, by the way, do you realize how much money is in this? What’s this guy’s name, you gotta be very careful pronouncing this name, too, that’s two days in a row, Bruce Poon Tip is out there selling tickets on his faulty ship to a bunch of idiot liberals paying who knows how much to go look at and find evidence of global warming. The money in the environmentalist wacko business and these eco-warriors is just funny. You know what powers these kinds of ships, fuel oil and diesel — how much of that stuff is now on the Antarctic Ocean floor? What kind of carbon footprint did the sinking of the eco-warrior ship create? As Thomas Lifson of the American Thinker asks today, ‘Will we see any polar bears or birds soaked in oil or diesel from the MV Explorer?’ Good thing Gore was not aboard.

By the way, in all the weekend coverage of this, not one aspect of what I’ve just told you was mentioned. They just portrayed it as a cruise ship. Now, I’m one of these guys, folks, I can read the stitches on a fastball, and there’s just something that doesn’t make sense on Thanksgiving weekend, a bunch of people on a pleasure cruise in the Antarctic. We’re not talking the Caribbean and pina coladas here. You can’t stand outside on this. It’s cold as a witch’s upper torso in the Antarctic Ocean. This is not where you go on a pleasure cruise. There were pictures of this thing sinking amidst ice in the ocean, and it was just so sad, but it was a story that ended very, very well because all passengers were rescued on this cruise. But not one aspect of who owned the ship, that he’s a friend of Gore’s, and it was an eco-warrior tour, was ever mentioned in the Drive-By Media.

RUSH: The New York Times. We talked about this cruise ship down in the Antarctic Ocean that hit the iceberg over the weekend. It sank. It had 150 people, the MV Explorer. It turns out it was a bunch of eco-warriors to look at the ‘evidence’ of global warming. P. T. Barnum was right: ‘There’s a sucker born every minute.’ All these environmental wackos are making millions off suckers! 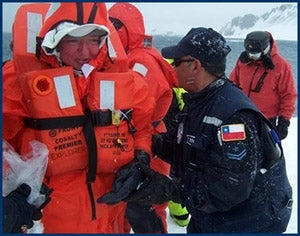 It’s like this story we had yesterday from the Daily Mail in the UK: Women are out there getting themselves sterilized in order to save the planet. These are liberals. There are going to be fewer liberals being born around the world as this continues. We need to encourage this. Sometimes, friends, you have to rise above principle. (laughing) Stop and think about that. It’s just that simple. Anyway, the New York Times has a story on this MS Explorer today. We’ve got a picture of these people that were on board being flown in a military-type aircraft to Chile — and this is just hilarious. I’m looking at a plane load of suckers! Now, I understand that there are some cruise ships to the Antarctic that can actually take and see various wildlife and so forth that are not eco-warrior oriented, but this one clearly was, and these people are wearing some of the most expensive outerwear you can imagine. Obviously they would need it going down to the Antarctic ocean. But the New York Times approach to this story is: ‘Misgivings Rise Along with Antarctic and Tourism — From its beginning until its demise the MV Explorer was an Antarctic pioneer,’ and they go down and give a little history of the boat, and the ship, and it also talks about how people were worried that the Antarctic has got enough problems of global warming. We’re going to go down there and look at it; we’re going to destroy it. If we’re going to go down there and sail it, we’re going to destroy it. We can’t do this!

This is the great line from the New York Times story: ‘While the rescue may have been a success, the consequences for the Antarctic’s fragile environment of having a submerged ship estimated to be holding 48,000 gallons of marine diesel fuel sitting off its coast are unclear.’ (Gasp!) Yes, even the New York Times is now worried, but stop and think of the irony of this. I don’t know how many of 154 passengers on board were eco-warriors, but I’m sure a lot of them were, because this is an eco-warrior owner. They get on this cruise ship — did you see pictures of this ship? I wouldn’t get on this ship if it was at dock! If it was at the port, I wouldn’t get on it. These people are on this thing and it hits an iceberg. You’ve got these guys going down to look at global warming, and the evidence of global warming. They hit an iceberg. The boat sinks. They are rescued. The boat sinks with 48,000 gallons of fuel. Look what they caused! I’m sure they have no guilt about it, because they’re down there to ‘save the planet,’ and accidents happened, of course. No reports on damage to fish stocks and other living beings that swim around. But the footprint, what about the footprint of the rescue and this giant cargo plane to have to fly these people to Chile for safety? Now, get this: ‘More than 35,000 tourists are expected to visit Antarctica this spring and summer, compared with just 6,750 during 1992 and ’93, and rather than just ships like the MV Explorer that carry a hundred or so passengers, the flotilla has included such behemoths of the cruise ship industry as the Golden Princess which arrived with 2,500 passengers and 1,200 crew members last season.’ Sorry. It’s just schadenfreude. It’s schadenfreude. I admit I’m taking pleasure in the hypocrisy and the misery and the suffering of others. 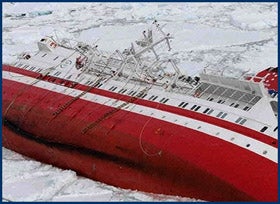 CALLER: I just wanted to comment on the global warming and the Antarctic ship that sunk. I’ve worked in travel for 33 years, I’ve sailed on over 60 different ships, I pick and choose where I go, and make sure that safety factors are always of concern on a ship.

RUSH: Well, that’s good. I would hope that everybody attending a cruise, going on a cruise would consider the safety factor of a ship.

CALLER: And from my experience, people, after they’ve done the regular cruises, they start looking at more adventure type of cruises —

RUSH: You mean like running into icebergs, or the possibility of it in the Antarctic?

CALLER: I would be worried about that, but it’s the highest on my list that I still want to do, and I hope that I do get to do it, and I feel that a lot of the companies are very, very safety conscious. I’m not that familiar with, you know, the background on this ship. We have very little information in our newspapers here.

RUSH: Of course. Nobody has the full story in the newspapers. That’s why I’m here to dig it out.

CALLER: Oh, that’s why I watch you all the time, Rush.

RUSH: The ship’s owned by some guy named Bruce — Bruce — I can’t get this — if I mess this up, I’m in big trouble. Bruce Poon Tip, yeah, Bruce Poon Tip. He’s from G.A.P. Adventures, a big friend of Algore.

CALLER: Well, that says it all, doesn’t it?

RUSH: Yes. Yes, it does. Now, I understand your concern, Lois. I mean, you are in the travel agency business, and you hear me being critical of Bruce Poon Tip and the MV Explorer, and I’m sure you don’t want negative reactions to the subject of Antarctic cruises, and I’m not trying to generate that at all. I mean, the boat sank, ran into an iceberg with a bunch of eco-warriors aboard. It’s a self-contained story. I did say I know there are plenty of Antarctic cruises that have nothing to do with global warming. They’re just people who want to go down and see some of the islands. They don’t really get close to the continent itself. I mean, they get fairly close, but I don’t think there are any docks there with Tiffany and Chanel that you get off the boat and shop. But they have some islands down there with some wildlife that’s unique to that part of the world, and people do want to see that.