RUSH: All right, to the audio sound bites, Clinton and Obama fighting it out over experience. Mrs. Clinton, it is said, is now starting to take swipes at Obama, which is unique because normally the Drive-Bys portray Mrs. Clinton as the victim of these personal attacks that so demean the campaign. But she is responding. Obama, what he said was, and it is kind of silly, did you hear what he said? Obama said, ‘Well, I lived abroad when I was ten years old, and that has given me a perspective on US foreign policy that other candidates don’t have.’ So Mrs. Clinton fired back.

HILLARY: With all due respect, I don’t think living in a foreign country between the ages of six and ten is foreign policy experience. I think having the firsthand experience with so many leaders that I have had over the last 15 years equips me to be a president who can start on day one.

RUSH: That was yesterday in Creston, Iowa, at a campaign rally. ‘I think having the firsthand experience with so many leaders that I have had over the last 15 years, equips me to be a president who can start on day one.’ This is like she’s got 35 years of experience standing up for kids; she’s got 35 years of experience at bimbo eruptions, and that’s it. The experiences she’s had with foreign leaders or health care programs have all been disasters. Here’s Obama, a portion of his remarks in New Hampshire.

OBAMA: She went on to make the point, as, uh, some of the Republicans have made, that, uh, you know, that she’s made — you know, she’s met with all these world leaders. Uh, and I — you know, I was wondering which world leader told her that we needed to invade Iraq? Because that’s not — that is the conventional thinking that we’re going to have to break.

RUSH: You know, if Obama’s smart, and he’s started laying the groundwork for this, but he’s not followed through on it, if he’s smart, he would do a JFK and start this ‘torch of a new generation’ business, because this election is going to be the last gasp of the Baby Boomers, the anti-war Baby Boomers from the sixties and the conservative Baby Boomers, of which I am one, they’re going to be represented here by Mitt Romney or Rudy, but that’s it. If the Clintons lose in ’08 this is pretty much the last gasp for the dying breed of the sixties anti-war crowd to get their arms around this country and shape it and form it in their image and what they want, which as I said earlier is socialism. Obama is not a Boomer, and if he really wants to make some hay here and move — and he is moving up in New Hampshire, he’s gotten a lot closer to her, a big poll came out, some local poll up there, which cannot please Mrs. Clinton, lead was from 24 to 14 or 23 to 14 in less than a month, so he is moving.

Huckabee almost tied with Mitt Romney in a poll out today in Iowa. And, remember, my friends, it was I, a few short weeks ago, who asked you to consider outside the prism of conventional wisdom just how much the campaign would be shaken up if Huckabee wins Iowa, even if he finishes a strong second. I know it’s not December yet, this is just a poll, but he is moving up. So the other Republican candidates are going to start attacking him now. They are going to do it on the subject of his ethics and his tax increases when he was governor in Arkansas. In addition to that, what happens, I asked, if Mrs. Clinton isn’t the nominee? I know it seems so unlikely and improbable. But if she isn’t? You know, everybody gets caught up in the media bubble and the conventional wisdom, and so many surprises can happen, and probably will between now and the Hawkeye Cauci on January 3rd. Now, here’s Obama in Manchester, New Hampshire, speaking to students at Manchester Central High School.

OBAMA: There were times when I, you know, got into drinking, uh, experimented with drugs, you know, uh, there was a whole stretch of time where I didn’t really find myself a lot, and it wasn’t until I got out of college — or got out of high school and went into college that I started realizing, man, I’ve wasted a lot of time.

RUSH: Now, there’s been some reaction to this, Obama admitting — he did it in his book, too, he admitted that he had tried cocaine, in the speech here he admits to consuming adult beverages and flirting with illegal drugs. Rudy Giuliani has come out and practically defended him. ‘Oh, come on, the days of having somebody with a perfect life, a perfect past, those days are over,’ and to have somebody admit these things, it’s good to get it out there before the Clintons get it out. Obviously. Remember what’s going on here. I know he talked about it in his book, but, remember, Robert Novak’s piece from last Sunday, the Clintons have scandalous information on Obama, but they’re not going to use it, and in the process of saying that, they’re using it. There’s scandalous information. Folks, I’m going to let in you on something. I might have mentioned this one other time. But there’s a story out there that supposedly everybody in the Drive-By Media knows. We don’t know who it’s about, they do. It’s supposedly really, really scandalous. It could blow the lid off of whoever the story is about. They struggling with how and if to use it, and everybody’s wondering, who’s it about?

So this leak to Novak on Sunday, scandalous information about Obama supposedly from the Clinton camp, or that the Clinton camp has it, everybody’s speculating, hmm, it might be Obama. Now, Obama’s gone out there since this leak happened and said, yeah, he took cocaine, drugs, wasted a lot of time, that doesn’t sound all that scandalous. Other people think it’s about another candidate and has to do with something not at all together with Barack Obama. So it’s lurking out there. In fact, the LA Times I think even reported on this story that everybody knows about it in the Drive-By Media, but they don’t know how to use it or if to use it. I don’t know what it is. I have no clue, and I don’t have that close a relationship with anybody in the Drive-By Media for them to tell me, so I’m among those speculating.

RUSH: John in Cincinnati, you’re next, great to have you with us, sir. Hello. 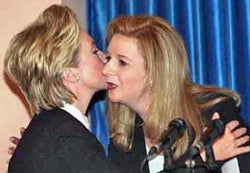 CALLER: I just wanted to speak to the junior senator’s experience, Hillary Clinton’s experience in foreign policy. If I recall correctly, she gave Yasser Arafat’s wife a big old kiss right on the lips. I mean, is that what we can expect?

CALLER: If I recall correctly, it was a kiss that — well, let me just say, it wasn’t the traditional kiss on one side, the other side, then the other side. And then blamed the Jewish community. And, you know, here she is, Senator of New York. And can we expect her to kiss the spouse of more terrorists during her reign as president of the United States? I mean, as far as being the most intelligent woman in the world, who would do that, really?

RUSH: The Clinton campaign, when you mention things like this to them, ‘Well, look Ronald Reagan kissed Raissa Gorbachev. These things are just done, this was protocol, and you, sir, are engaging in yet another personal attack against Mrs. Clinton and her good nature.’

RUSH: The bottom line is, you’re dead right, she is unqualified, she is inexperienced. In fact, I think, you know, in that sound bite that we played attacking Obama for claiming that he has foreign policy experience because he lived abroad until he was age ten, she said, ‘I’ll be ready on day one.’ It struck me later, I think that was one of the slogans of George H. W. Bush in 1988, when he was succeeding Reagan, ‘I’ll be ready on day one.’ I know it’s not hers. I have heard this somewhere else. It’s plagiarism. She’s stealing it from a Bush no less.