Is Arnold Just Tired of Hearing My Name?

CALLER: I go back to listening to you and your Diet for Peace. 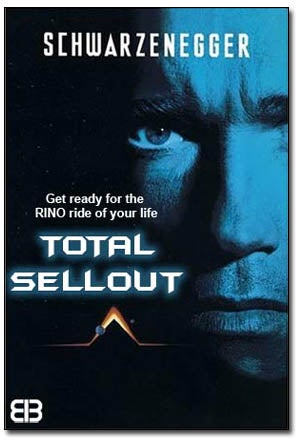 CALLER: I don’t. It’s kind of vague. We caught you on taped replay.

RUSH: Let me tell you what it was. I had toured an Air Force Base (I forget the name of it) in Kansas, and they had a bunch of B-2 bombers out there on the ramp, and they let me climb up and go in one. It was a tight squeeze in there. I had dreams of being able to rush to the sound of the siren, sit in the pilot’s seat, takeoff, and bomb Moscow. But I needed to lose some weight to be able to slide easily into the pilot seat. So that’s what the Diet for Peace was.

CALLER: Well, congratulations on that effort, too. Good job.

RUSH: And he got elected as a conservative.

CALLER: He’s saying that you’re ‘irrelevant.’ First, how did this happen? Second, isn’t it kind of time that we begin to see that the house of conservatism isn’t in the Republican Party? It may be on paper, but it isn’t really, and we need to see this kind of in action politically.

RUSH: This is what I’m saying. Conservatism runs the risk here of being redefined by people who are Republicans saying they’re the next Reagan when they’re not. They’re okay guys, but conservatism is what it is. Conservatism is not going to get watered down as far as I’m concerned so that a candidate who is not a conservative can be called one. I’m not going to do this. If whoever the Republican nominee is, is not conservative, I’m not going to say he is. I’m not going to participate in this watering down the definition of conservatism. As for Arnold calling me irrelevant, there’s two things at work here. A, I think he’s just fed up being asked about me every time he’s on this damn show. Every time he is on the Today Show, they throw my name at him. For the first four or five times, he was very diplomatic about it. Today he said (Arnold impression), ‘Limbaugh is irrelevant. I run Caleeefornia. I’m the servant. What veese people talk about is irrelevant to ve,’ or whatever.

I also think that there could be a strategery here, because now he knows he’s going to be asked about me when he goes on the Today Show. He’s gotta figure that every time he goes on there, it happens. So maybe he and Maria said, ‘Look, call Limbaugh irrelevant and the people in Hollywood will love you even more,’ because there are plenty of leftists who hate my guts. I will guarantee you, ‘Schwarzenegger Calls Limbaugh Irrelevant’ will be all over the left-wing blogs and the Drive-By Media by the end of the day. Then there will be seminars and discussions on the Sunday shows and on media review shows: ‘Is Limbaugh irrelevant?’ They’ll start examining the kind of impact they say Limbaugh ‘used to have’ but now the blogs have taken over. Schwarzenegger will be proclaimed right. It’s a possibility. That’s the pattern that these things usually take. But as I said earlier, he’s a nice guy. I’ve smoked cigars with him. But you can’t make friends with these people when you do what I do. You end up not criticizing your friends. You can like ’em, but they can’t become your inner circle friends. I just think he’s tired of hearing my name thrown at him on that show.