RUSH: What was it, a couple days ago I mentioned Gary Sheffield’s remarks about why there are fewer and fewer blacks playing Major League Baseball, and Gary Sheffield said, ‘Look, it’s a simple matter that you can’t control my race, but you can control these Latins.’ He said, ‘I called this a long time ago. You’re going to see dark faces on baseball fields but there isn’t going to be any English coming out of their mouths. They go down there and they recruit, they can control these Latins because all they gotta do is threaten to send ’em back home if they don’t straighten up and fly right. But you can’t do that with my guys.’ Now, somebody’s actually run the numbers on this. The percentage of blacks, American blacks, African-Americans playing baseball is like 8.8%. So even when we bring something up on this, something as innocuous as something like that, it leads to even wider coverage. 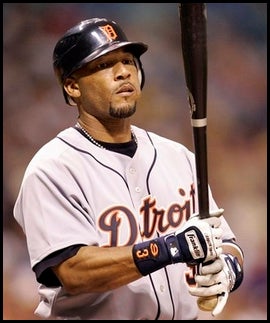 The Detroit Free Press has a column today on how Latin baseball players are treated like migrant workers. I’m not making it up. I have is right here in my formerly nicotine-stained fingers. He says that American black kids aren’t playing baseball because they don’t have the money. All the equipment is expensive. All you need is a hoop and a basketball to go play basketball, but you need bats, you need baseballs, you need bases, and you need a lot of friends to go out and play baseball, and you’re just not going to get it because it’s too expensive. Now, a lot of black kids are playing football, and that requires some equipment, too, and it requires a lot of friends, not cheap, but maybe not as expensive as playing baseball when you’re a kid. But he says this, and I’m just going to give you some excerpts. What he’s saying here is that Latin ballplayers are playing a sport Americans won’t play. It’s amazing.

‘Compared with their American-born counterparts, Latino players are like migrant workers. They deal with lousy work conditions because the alternative — going home, often to a poverty-stricken area — is so unappealing. On every rung of the ladder, they are afraid of getting sent home. Yes, this makes them ‘easier to control.” What lousy work conditions does a Major League Baseball player have? ”The main reason is economics,’ said Don Motley, the executive director of the Negro Leagues Baseball Museum. ‘A fixed-income person, their kids cannot afford to play this game anymore. To me, that’s what happened to these black kids who are not playing baseball.’ If there is a hoop in your neighborhood, you are just a basketball away from being able to practice. In baseball, you need bats, gloves, balls and a bunch of friends who can afford the equipment, too. It is much easier to start a pickup basketball game than a pickup baseball game. In some Latin countries, baseball is so ingrained in the culture that kids will play with homemade bats, balls and no shoes. That’s not the case in America anymore.’ (laughing) I’m not making this up.

I’m literally not making this up. This is in the Detroit Free Press. Fixed income families can’t afford to go out and buy the kids enough bats and baseballs — (interruption) a hundred dollar Mike Jordans? Air Jordans are $250 bucks, aren’t they, 200 bucks? Oh, come on, Brian, you’re a sports nut, you should know this. I know they’re not a hundred bucks. The Latin kids will play in their bare feet because they are willing to do what Americans won’t do. The immigration detainee debate has now found its way into this controversy over why there’s so few blacks playing Major League Baseball. I’m still stuck here on this notion that Latin players deal with lousy work conditions in Major League Baseball? They just don’t exist.

CALLER: Rush, thanks. I wanted to see if I can tie Gary Sheffield, John Rocker, and Rush Limbaugh all into the whole debate on what Gary Sheffield had said. I think, you know, when John Rocker made his comments about New York City in a bad way, because some things he had said were pretty ridiculous, but he basically was debating that people weren’t speaking English, he couldn’t understand a word of what anyone was saying, no one, you know, can do it, and he was run out of the league.

RUSH: Well, but he included other groups that were not —

RUSH: — immigrants. He mentioned gays — he disparaged practically, you know, the whole mix of population there in New York in a couple of sentences.

CALLER: Yes. And then your comments, which weren’t about Donovan McNabb per se, but they were about the media itself, which, if you watched Sports Center last night, you could see the excuses were already coming out for Gary Sheffield. You were run out of ESPN which I thought was a bad thing just for comments that you had made, but Gary Sheffield now makes comments, and he’s a hero and they found this one guy on ESPN who is I guess a Latin player who agrees with Gary Sheffield.

RUSH: Really? I haven’t seen one of those. I know Eddie Perez with the Braves was angry at what Sheffield said. Look, you’re not surprised Sheffield’s not being called out on this, are you?

CALLER: Oh, no, sir. No, sir. Not at all. I mean, the way, you know, the media, even, you know, we talked about the liberal sports media or you do on your show and some of the local shows and things like that, just in the difference of, you know, most recently when Wolfowitz, when he was fired from the World Bank. We didn’t find out he went to the ethics committee to get his advice until after he was fired — or asked to leave, I should say, wasn’t fired, asked to leave.

RUSH: Well, that’s a case where nobody stood by him at the top. The Wolfowitz thing was a frustrating thing. Chuck Schumer may as well be running this administration. Chuck Schumer is running the justice department. Comey and Fitzgerald. In fact, I’ve been calling Fitzgerald Fitzfong, it’s Fitzschumer. The guy was demanding an investigation, demanding to know the details of the investigation, doing everything that he accused the Bush administration of doing in the US attorneys scandal. But look, Sheffield is protected because he’s a victim, and plus he was talking victimology. ‘We’re victims here. We’re being victimized because we’ve got these Latins coming in taking our jobs because they’re more controllable. Why, there’s still slavery out there,’ and the libs love hearing that except the slavery now is against the Latinos because the blacks, according to Sheffield, they can’t be controlled but the Latins can because they’ll be threatened to be sent home. So Sheffield is presenting himself as a victim, fewer and fewer African-Americans playing Major League Baseball, he comes up with an explanation, the liberals and the Drive-By Media and the sports pages, they swoon, because they’ve been trying to get this subject in the mainstream for a couple years at ESPN. So not a surprise to me that nobody is upset by what he said. There’s different standards for different people here, different standards for different groups.