No Energy in the “Energy” Bill 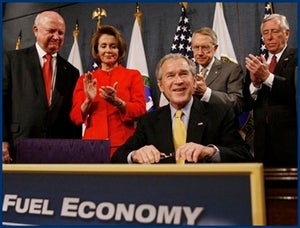 RUSH: The energy bill. What a disaster. It’s just an absolute disaster. ‘Energy Bill Boosts Fuel-Economy Standards — One-hundred watt lightbulbs to vanish,’ and you’re going to get stickers on your car saying how much your carbon footprint is, what your emissions are. In addition to the sticker over the price, you’ll get a sticker telling you how much your car is going to pollute, like all the warning stickers on the sun visors that make you think you’re an idiot. Jane Harman (D-CA) said, ‘In this bill, we ban by 2012 the famously inefficient 100-watt incandescent bulb.’ The question remains now: this energy bill creates no new energy. In fact, it stands in the way of the creation of energy. The question ought to be: ‘How many miles will your next car get per new lightbulb?’ I haven’t seen the bill myself. I doubt members of Congress have, either. They just signed the damn thing. But does the bill titled ‘energy bill’ end with a period or a question mark? is my point, because it could just as easily be called, ‘What Energy Bill?’ Petroleum? Nothing in it. Nuclear? Nothing in it. ANWR? Nothing in it. The big brag here in the bill, the big talking point is that the CAFE Standards, the fuel, the mileage standards for cars increase from 25 miles per gallon to 35 miles per gallon in 13 years.

Remember my trip to Detroit talking to some executives up there? I asked them, ‘Are you going to build that big, 16-cylinder Cadillac that you were thinking about?’

‘For crying out loud!’

‘Oh, yeah. The public’s all worried about global warming, and they’re the customer. So we gotta give them what they want.’

Thirty-five miles per gallon by 2012? That is going to make me mad. I am not going to drive a car that gets 35 miles per gallon. I’m just not going to do it. I’m going to find a car that gets eight or ten, like I get now, because I’m not going to drive around in some little Podunk lawnmower with a couple seats on it, and think I’m cruising around. They don’t say how many years it will take to replace all the existing less efficient cars. We have 250 million-odd cars on the road. I don’t know how many we sell every year, ten, 15 million. I’m guessing. But at that rate you can forget 2012, the 13-year illusion. It could take 20 or 30 years to get all those cars off the road, especially if people end up liking them versus the junk that’s going to come out getting 35 miles per gallon. (sigh) It’s just maddening. It is bowing to a bunch of stuff… Look, I’m all for fuel efficiency and that kind of thing, but nothing in this energy bill was oriented toward growth and finding and producing more energy. It’s all about ‘conservation,’ which is not even half the story. It’s important, of course, but you can’t grow an economy simply on conservation.