Our EIB Week in Review: “Support the President, But Not His Policies”

RUSH: He said he has got nothing against white construction workers, but said he wants to hire minorities and stuff. It’s strange he didn’t talk about qualifications to do infrastructure work. He talked about groups. Anyway, greetings, my friends, it’s Open Line Friday, and when we go to the phones the program content is all yours. You know the rules by now. Monday through Thursday we only talk about what I care about, but on Friday, I’ll fake it, if I don’t care about it and you want to talk about it. 800-282-2882. The e-mail address is ElRushbo@eibnet.com.

I don’t know if we could hire Larry King’s son, Cannon, eight years old. Larry King said on CNN a couple nights ago that his son told him that black is in and Larry King’s son said he wished he was black, putting Bob Woodward in a very nervous position, asking Woodward what he thought of that. Woodward said, (paraphrasing) ‘Gee, am I back in the hospital talking to Bill Casey here?’ Who was in a coma at the time. At any rate, I don’t know that we want to put Cannon King on a construction crew. We might want to hire him here is an intern so he can learn broadcasting. 800-282-2882 if you want to be on the program again, folks. All right. 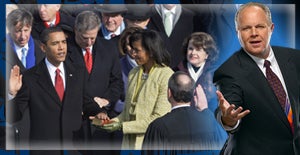 Now, let’s take a look at the week. Not a good week, folks, looking at this objectively and honestly, as one who supports the president, who wants him to be well and wants him to do well. A lot of omens this week, folks. You know, if I were in the Obama administration, I would be a little concerned. First off, the oath was botched. I don’t care who botched it, but that doesn’t happen. The oaf of office was botched. The immaculation address by Obama was a dud, a flat-out dud. In fact, Charles Krauthammer, a great piece today in the Washington Post. And Mr. Krauthammer was one of the conservatives who dined with Obama at George Will’s home in Chevy Chase, Maryland. Krauthammer says it was so bad and so flat and so unlike Obama that he wonders if Obama did it on purpose. He wonders if Obama botched this speech on purpose to lower expectations, knowing full well that he can’t hit grand slams all the time. I don’t know about that because to me this is not the kind of occasion where you want to leave your cult followers clueless as to when to applaud and cheer.

RUSH: But moving on, okay, the oath of office was botched, the immaculation speech was a dud, the immaculation benediction by the Reverend Lowery was racist. Yesterday, when reading and announcing and signing the executive orders, he had to ask Greg Craig — should we start calling this guy President Craig? He had to ask Greg Craig to fill in the blanks here because it looked like he didn’t understand and couldn’t explain the executive orders to the country without any help. (doing Obama impression) ‘We’re going to do this and, uh, what comes next here, Greg? Oh, yeah, due process and all that.’ Then he went down and tried to play hunky-dory with the press in the pressroom last night, and that blew up in his face, ’cause they asked him a substantive question, and he puts his hand on the reporter’s shoulder, ‘Nah-nah-nah-nah, there’s gonna be a press conference coming up. You’re not supposed to do that now.’ A photographer bailed him out by asking him if he wanted a retake. ‘You want to say that again, Mr. President?’ Much like Kerry botched an interview with CBS, and CBS said, ‘You want to do this again?’ This is during Kerry’s campaign in 2004.

His cabinet nominations. The IRS nominee is a tax cheat. Other nominees are conflict ridden. Other nominees are corrupt. To top it off, this massive porkulus — it’s not a stimulus, it’s a porkulus — this porkulus spending extravaganza has been flatly rejected by the Office of Management and Budget and Wall Street. We had the details yesterday. The Office of Management and Budget says the vast majority of this stuff is not going to get spent ’til after 2010 or 2011, and 2010 just happens to be reelection year. (gasping) This is day three, in addition to that. One of the executive orders that Obama needed help explaining was the announcement of closing Guantanamo Bay in one year, which I deftly reacted to. I have a thriving merchandise business down there. We’re coming up with a brand-new line. The government has thrown us a curveball, but we’re not just gonna sit here and whine and ask for a bailout, we’re going to turn it into a teachable capitalist moment.

But the New York Times has a story today that a Saudi who was imprisoned at Guantanamo was released and has now become a deputy leader of Al-Qaeda’s branch office in Yemen. Did you hear me, ladies and gentlemen? Look at me. We released a prisoner from Guantanamo Bay. We have tracked the prisoner. We now know that he’s a deputy leader of Al-Qaeda’s Yemen branch. Yemen, by the way, is the site of the bombing of the USS Cole. In addition to all that, ladies and gentlemen, we have also learned that the four-piece classical music quartet that played a special composition by John Williams at the immaculation on Tuesday faked it. Milli Vanilli may as well have been on stage. Yo-Yo Ma, Itzhak Perlman, and others claimed it was too cold, they could not have played this perfectly because it was too cold, so they went to the Marine barracks on Sunday and just in case they recorded a version of it, and because it was too cold they played the fake version, the taped version at the immaculation while pretending to play the real thing. 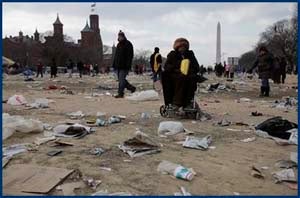 I have a question. Was anything on Tuesday real? We also have a story that most of the Port-A-Potties were not used, and the guy from the company that supplied a lot of them, Don’s Johns — you wait ’til you hear this story. This guy takes very seriously the Port-A-Potty business. He was very unhappy that so many of them went unused. I saw the, I called it Hurricane Latrina, all the refuge, the refuse and the trash out there. As I say, folks, we’re on day three. It appears that the president I support, I just don’t support his policies, it appears he doesn’t know what he’s doing. He hasn’t run anything in a long time. He’s never really accomplished much. And then the Caroline Kennedy story in New York. Folks, I tell you, this woman — oh, oh, I forgot, folks, I forgot one other thing. Oh, this is huge. I forgot one other thing. Barack Obama apparently ordered the killing of seven Muslims in Pakistan without a trial. We sent a drone into Pakistan. The drone fired on a pack of terrorists in Pakistan, and it killed seven of them. This under the headline: ‘Obama Brings Peace to the World.’ In fact, we have the audio sound bite of this. This morning on CNN’s Newsroom, the correspondent Reza Sayah reported live from Islamabad. We put this together as a montage.

SAYAH: Many here in Pakistan were eager to see if these US missile strikes would end under a Barack Obama administration, and we have that answer here in Pakistan on this Friday night and that answer is no. Again, another suspected US missile strike hits a building in Pakistan’s tribal region along the Afghan border. Ten people have been killed, according to a local political official and two military officials who asked not to be identified. This week, Barack Obama, America’s new president himself said, ‘In this region Al-Qaeda remains at large, plotting the next attack on US soil.’ Washington’s strategy for the past year has been to hammer these targets with these US missile strikes. They’ve been very controversial here in Pakistan. They fueled anti-American sentiments. 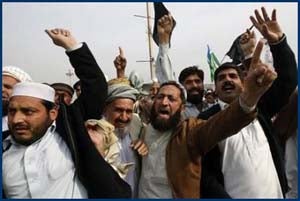 RUSH: Well, the Bush policy apparently has been renewed and reauthorized by President Obama, which has led to anti-American sentiments. Missiles fired from a suspected US spy plane killed now ten people on the Pakistan side of the Afghan border, a lawless region where Al-Qaeda militants are known to hide out. So I guess what we’re to take from this, the Obama administration — which I support, I just don’t support the policies — it’s okay to kill these people, but don’t capture ’em. If he doesn’t have to answer questions, why should anybody else? Obama signed an executive order this week closing Club Gitmo and the CIA black sites. This is why I’m conflicted, folks, you’ll just have to excuse me here, but I thought during the campaign and all during the last four to five years we kept hearing from tenured, respected — ahem — members of the Democrat Party that killing Muslims is what caused all of our problems in the Middle East, that and supporting Israel. Killing Muslims made them hate us.

RUSH: Rich in Waycross, Georgia. We’re going to start with you on the phones. It’s Open Line Friday. Great to have you here.

CALLER: Yes, sir. How you doing?

CALLER: Outstanding. My only concern was, I hear you this afternoon saying that you support the president but not his policies, which I understand completely what you’re saying. It just concerns me that during Bush’s term the left were fond of saying they ‘support the troops but not the war.’

CALLER: And my concern is that bloggers and Drive-By will hear you say this and a gotcha moment. I don’t feel that you need to qualify your support.

RUSH: Well, it’s known. What I’m actually doing is just throwing the absurdity of their statement backed in their pockmarked faces. I illustrate absurdity by being absurd. How can I support the president, but not his policies? That’s as silly as saying, ‘I support the military but not the mission.’ I’m trying to illustrate how empty their support was and how it was not true. So I’m throwing back one of their own techniques right at them.

CALLER: I see, said the blind man. That makes perfect sense. I appreciate you clarifying.