RUSH: Pat in Muskegon, Michigan, I’m glad you called, nice to have you here on the EIB Network. Hello.

CALLER: Yes, hi, Rush. You know, I’ve been a fan of yours for over 20 years and you’re making me so frustrated I swear at my radio every day lately. How you can possibly say it doesn’t make any difference whether Hillary or Obama is elected or if McCain is elected, there are so many things that are coming up that it’s very possibly going to be two Supreme Court judges that are going to have to be nominated. He has — the pro-life — excuse me. I’m losing my voice. He has a good pro-life record. He would vote for partial-birth abortion. He has an 82% conservative rating with the American Conservative Union. 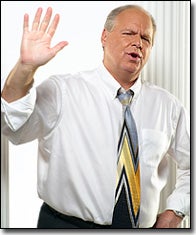 RUSH: He opposes a constitutional amendment on abortion of any kind and on same-sex marriage, he opposes it.

CALLER: Can I tell you something about Henry Hyde, who I loved dearly? Henry — (unintelligible) proposed human life amendment. He didn’t bring it up because he knew there weren’t enough votes in the House to do it. You know, I’m a Reagan conservative. I served as an alternate delegate for Reagan in 1980 and had the wonderful privilege of actually casting an electoral vote for him in Illinois.

CALLER: I worked with Phyllis Schlafly to fight the ERA, so I am a conservative, believe me.

RUSH: I don’t doubt you. What are you mad at me about?

CALLER: (laughing) Because you’re encouraging people. You have been attacking McCain relentlessly. I agree with you, I was angry with McCain about all the same things you are. But when it comes to the final thing, commander-in-chief, do you really think that Hillary or Obama would be a better commander-in-chief than John McCain? This is a very perilous time we’re in. The Middle East is like a powder keg ready to blow up any minute and —

RUSH: I’ve answered this question. I will answer it again if you really want to hear it, but I don’t think it matters because the die is cast. I’d rather go back to your Supreme Court thing.

CALLER: Yes, I have. And I agree with you. We gotta get out and get —

RUSH: All right. You haven’t heard me tell people to vote against McCain today. You’ve heard me assume he’s going to be elected president.

CALLER: I know, but you’re saying it doesn’t make any difference, and I think it does make a difference —

RUSH: On a host of things it doesn’t. This has been the point all along. Just be patient. We’ll talk in a year and you’ll see what I’m talking about.

CALLER: I agree with you about getting senators and congressmen.

RUSH: Let’s stick with your business on abortion. You’re right. There is predominantly one thing a president can do to affect Roe vs. Wade and that’s the appointment of justices —

RUSH: Now here come the Democrats. They probably won’t even have to filibuster. They’ll have the votes to stop it. What are we going to do? They will have the votes to stop this. They are not going to sit by. If they have significant majorities in the House and Senate, they are not going to sit by and allow those kinds of judicial nominees to end up on the court. They will filibuster. They’ll do whatever they have to do. Now, are the Republicans in the Senate going to now go with the nuclear option since the guy who stopped the nuclear option and who could have prevented these filibusters in the first place is now the president?

CALLER: Can I speak for that? Because originally I agreed with you. I was mad because I thought, why are they taking that away? But then the more I think about it, it was smart, because you’ve got the numbers mixed up. We’re the ones that would have to filibuster, if we can hopefully get at least a majority stopped at 60.

RUSH: Look, you’re missing my point, it’s probably my fault. My focus here is to prevent the — I’m granting you that McCain’s going to nominate justices that you like and that we would all want.

CALLER: Right. And you’re saying that they won’t get the votes.

RUSH: I’m telling you it’s going to be hell to get ’em confirmed. The last thing in the world the Democrats are going to want is for that to happen. If they lose the White House, do you know what a tear they are going to be on? They are going to be frosted. They have had the presidency in their back pocket for the last two years. They think it’s a fait accompli.

RUSH: And they think it’s an even greater fait accompli now that McCain has been nominated. They think he’s going to be easy to beat.

CALLER: You and I do agree on one thing, Rush.

RUSH: I’m stipulating he wins the presidency. I’m not trying to undercut this, now, listen to me, I’m just telling you, I’m trying to prepare you to get frustrated as hell when he nominates the judges you want and there aren’t enough Republicans in the Senate to confirm ’em, and when McCain’s habit is to reach across the aisle, work with Democrats to make them happy, he hasn’t reached within his own segment to keep conservative Republicans happy, I’m just telling you, that’s why I’ve been saying today get as many Republicans elected in the House and Senate to keep these Democrat majorities down so as to get these judges confirmed, because that’s where it’s going to happen is in the Senate.

CALLER: Well, I agree with you on that, Rush. Let’s also get McCain elected because it will make a big difference. I love you, Rush.

RUSH: We’ve moved on. The primaries are over. It is what it is. I’m talking to you today with a hypothetical that he wins the presidency and what is likely to happen as a result. See. I better take a break. I’m looking at the clock here. I’ve gotta take a break. Look, Pat, thanks for the call. I understand your being irritated with me, but I don’t think you’re really irritated with me. I think what you’re irritated with is that I am telling you, I’m giving you, I’m laying out for you reality, and it’s not what you envision supporting McCain or any other Republican in this roster, frankly, probably.

RUSH: I’m going to give you a little tip, folks, because I care about you. We talk about David Brooks at the New York Times here a lot. If you want to know what Senator McCain is going to do as president, read David Brooks’ column in the New York Times. I’m not sure what days of the week it comes out. It comes out twice a week. But read David Brooks of the New York Times. David Brooks is the McCain Talking Points Memo. That’s what it is, and you’ll get an idea what McCain is going to do. Now, I’ll tell you something else I’m going to do, folks. I have to run outta here today, but next week when I finish the program, I’m going to record some thoughts that I would love to tell you right now, but I’m not going to. I’m going to put ’em in a time capsule, and we’re going to find a way to accurately date and time-stamp them — and, in about a year from now, I’m going to play them for you. (interruption) No. No more hints, Mr. Snerdley. I’m just going to put some thoughts in a time capsule, date and stamp ’em — not long. It won’t be longer than a couple, three minutes. At the appropriate time, we’re going to open the time capsule and let you hear what I recorded next week, a year from now. 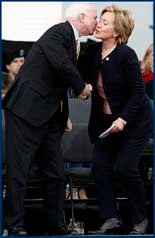 One other thing. That last nice lady, the last caller — Pat from Muskegon, Michigan, is that right? I’m not attacking Senator McCain today. I’ve been doing just the exact opposite of that. But I want to say to a lot of you here, I’m interested in party loyalty — and, you know, she got on my case for saying, ‘There’s not going to be any difference between an Obama or a Hillary or McCain presidency.’ She cited judicial appointments, and I have to grant her that. I mean, there are not going to be total similarities, but Hillary Clinton would make a good president. (pause) Yes, you heard right. ‘Hillary Clinton would make a good president.’ In the interests of party loyalty, I say this because Senator McCain has said it — and I’m not undercutting Senator McCain anymore. The primaries are over. Well, they’re not over, but I mean he’s the presumptive nominee, and I’m not going to sit here anymore and listen to the Drive-Bys and all these other people in the Republican Party say I’m tearing the party apart. So if Senator McCain says that Hillary Clinton would be a fine president, on this program she’s going to be a fine president. I too can do party unity, as well as anybody. I can get on board the bus.