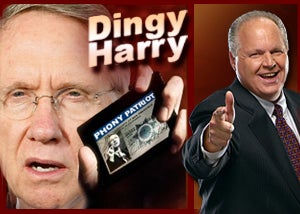 RUSH: I gotta tell you this. This is actually funny, too. There’s a letter that the Democrats are sending out from the Democrat Senatorial Campaign Committee to fund-raise off of my name and this phony soldiers flap that they have started and are lying about. ‘Dear friend: Demand that Rush Limbaugh apologize. That’s the latest salvo from Democrats who want Americans to believe that the influential talk show host has insulted US –‘ It is so absurd! But get this: ‘Writing on behalf of the Senate Democratic Campaign Committee, a political group that works to elect Democrats, Senate majority leader Harry Reid on Thursday said he normally ignores Rush Limbaugh but Limbaugh’s recent comment about phony soldiers went too far for him to stay silent, Reid said. ‘It’s one thing to call me Dingy Harry” — (laughing) — he actually acknowledges the name I call him in this letter! (laughing) ‘It’s one thing to call me Dingy Harry, but it’s another to insult our men and women in uniform.’ Which, you know, Senator, never happened.

Belinda in Alexandria, Virginia, I’m glad you waited. I appreciate your patience.

CALLER: (laughing) Mega dittos from a Rush babe trapped in —

CALLER: — I’m trapped in Virginia just outside Washington, DC, and no one represents me, local, state, or federal. Rush, you warned us a year ago, or a month ago that the Dems would be trying to make a turnaround to make themselves look patriotic, religious, and concerned. And by picking on you, that’s what they’re trying to do.

RUSH: Yes. And that prediction I said by December, they hope to have accomplished this, because they’ve gone over the cliff, and it has backfired. This planned and coordinated attack, which is filled with as many lies as I’ve ever heard in one story, and as protracted in length as this one has been, is what they think is going to cause them to be able to turn this around. But this is not going to sit well with their kook-fringe base, who doesn’t want to hear good things about the military.

CALLER: Exactly. It’s going to be firing against them and hasn’t worked. We love you and the military loves you, Rush.

RUSH: Thank you very much. I love you, too, Belinda, more than I will ever be able to acknowledge.