The “We All Got Screwed” Election

RUSH: A quick question for you, ladies and gentlemen. What’s been going on longer in your mind? What does it seem has been going on longer, the war or this 2008 campaign? After all this time in the campaign, after all this time, all the players still have problems. And all of these players say that they would have solved Iraq, it would be done with, we’d have been out of there, we’d have finished that problem, we’ve got incompetence in the White House, incompetence at the Pentagon, and yet all of these players, all of this time this campaign seems like it’s been going on as long as the war, and they still have problems. McCain has problems. Mrs. Clinton has problems. Obama has problems. Democrats and Republicans have problems. The media have problems. I, your host have some problems. Even you have problems. Think about it. Here’s McCain’s problem. His key issue, winning the war against jihad is supported most strongly by the folks who support him least strongly. Hillary’s problem: She couldn’t win without her husband, and he’s making so many gaffes, it looks like she can’t win with him. Obama’s problem: We won’t know until the Clintons or the friends of the Clintons or surrogates of the Clintons drop their surprise, but then, wait, Obama made a secret visit caught on videotape to the home of the Breck Girl, 28,000-square-foot house. 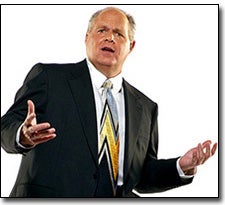 I wonder if Obama had any trouble finding his way out of there. Democrat Party problem: Superdelegates, insiders, party bosses, undies. For all their talk that every vote counts, it’s beginning to look like only 796 count, the superdelegates. So much for words versus actions. Republican Party problem: Their best chance to hold the White House is a run against Mrs. Clinton. Her negatives, her records, her left-wing ideas, but if Mrs. Clinton loses to Obama, they can’t blame it on a right-wing conspiracy. Media’s problem: If Obama’s momentum keeps up, TV news ratings will start going down. It’s in their interests to make the race, the contest, seem up in the air as long as possible. My problem, I got core beliefs, I got conservative roots that make it difficult, if not impossible, to just get along. So I’m not going to do things just to get along. But you have the biggest problem, and I’ll tell you what that is when we get back.

RUSH: I went through everybody’s problem. Let me repeat my problem again that everybody has in this campaign. I have core beliefs, conservative roots that make it difficult, if not impossible, to just get along. I mean, it’s not a problem for me. It poses a problem for others, and they wonder at my intransigence. But the most important problem of all is for you, my dear audience. During all of this, this seemingly endless campaign which seems to be going on longer than the war, your big problem is I’m only on three hours a day. That is a problem that affects real lives. If I were on longer than three hours a day, you would have less to be undecided about. But I always rely on the creed that has guided me to this point in time, and that is this: Always leave them wanting more.

RUSH: I was also thinking about this, ladies and gentlemen. During the top-of-the-hour breaks, I take a little respite. I leave the cavernous broadcast complex here, stroll into Mr. Snerdley’s office. We had an interesting conversation about phone calls today. While I was talking to him, he was acting like he was not paying much attention. He was channel surfing around, and I noticed — I’m, you know, subliminally subconsciously aware of this but it just struck me, went to C-SPAN, to DNCTV, MSNBC, went to CNN, went to Fox, everywhere he turned there’s a babe, info babe anchoring or reporting the news. I got to thinking, ‘What if Hillary really does lose this thing?’ I’m teetering back and forth. I’ve got the sense — I could be wrong about this — but I have the sense that the Drive-Bys are in the midst here of changing their coverage of Obama and are going to start being a little — oh, how shall I say? — more critical, perhaps a little more hard hitting of Obama, getting past some of these say-nothing-better-than-anybody-else-ever-says-nothing speeches that he makes. And, what if she actually loses? What if that happens?

I was thinking, all of these women on TV, wherever they are, even those who may not particularly be for her now, I wouldn’t be surprised that if that happens that all of a sudden there becomes a similarity in the coverage. ‘A woman lost! In 2008 this country is still so sexist that it will refuse to elect a woman.’ I can just see them all getting a little miffed, even though those women that were not for her, I can see them jumping in on this, too. And I can see things like, ‘I can’t believe this country. They actually support an inexperienced black guy over a competent, experienced woman?’ These are just random thoughts that occur in the fertile gray matter known as my brain. And then I got to thinking, it’s not just women. We could be calling this the ‘we all get screwed campaign.’ Somebody’s going to get screwed in this campaign. When this is all over, women are going to think they got screwed, African-Americans are going to think they got screwed. Seasoned citizens might think they got screwed. Do you realize what the attitude’s going to be when this thing is all over? And who knows, regardless how it ends up, somebody is going to think they got screwed as a member of a group. 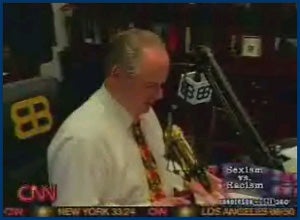 KAYE: Hecklers at a Hillary Clinton rally shouted for her to iron their shirts. Radio host Rush Limbaugh wasn’t any kinder.

RUSH ARCHIVE: Will Americans want to watch a woman get older before their eyes?

KAYE: Her hairdos, the shape of her ankles, even her cleavage has been debated. Why do sexist attacks seem more prevalent than racial ones? Some here point to free speech, others to racial guilt. Still, Barack Obama has had his share of jabs. Rush Limbaugh, not playing favorites, aired this song called ‘Barack the ‘Magic Negro.” It’s not just the right.

RUSH: I told you earlier in this program, I told you earlier in this program if Hillary loses, all these women on TV, even the ones who are not even for her are going to, all of a sudden they’re going to, realize what happened here, that America threw a woman overboard for an unqualified black guy? This I would think I would get credit for being equal opportunity here. But even when they play this ‘Barack the ‘Magic Negro” thing they refuse to cite the real source of this, a liberal Democrat black guy columnist for the Los Angeles Times. I can handle it. I think it’s funny.