Which MSNBC Host Should Resign? 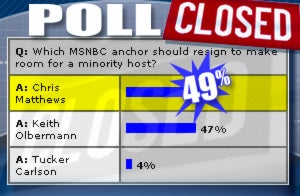 RUSH: We continue our poll at RushLimbaugh.com: ‘Which MSNBC anchor should resign to make room for a minority host?’ You have three options: Chris Matthews, Keith Olbermann, or Tucker Carlson. This is an electronic vote. We put it up at two o’clock Eastern yesterday afternoon with one hour of the program left. We have kept it going all night long. It received a tremendous number of votes. It’s very close: Matthews now with 49%, Olbermann 47%, and Tucker Carlson at 4% — and we don’t know what to attribute that to, other than many people may not know who he is. But the poll is up and we’re going to keep it at least through the end of the program today, maybe a little bit longer since there are some other things distracting. This is done in conjunction with Al Sharpton’s National Action Network convention, and of course, Jesse Jackson and Al Sharpton were lamenting the fact that there were no minority hosts on MSNBC from three p.m. to midnight, and that’s true, and we agreed with them about that.

Of course, these hosts were going on and on and on about the racial inequalities in our country and how unfair things are, how discriminatory and bigoted and prejudiced things are in this country. So we’ve suggested that one or two of them resign and give their show to a minority as a show of leadership, a show of compassion, and basically make it more than just words, guys. Deeds! So: ‘Which MSNBC anchor should resign to make room for a minority host: Chris Matthews, Keith Olbermann or Tucker Carlson?’ Vote now at RushLimbaugh.com. It’s very close. These guys may demand a recount before this is all said and done. There’s no paper trail, either, on our poll. This is strictly electronic. We trust it implicitly.