Sarah Palin Toys with the Media


RUSH: I want to move on to Sarah Palin now. You know the Beatles’ Magical Mystery Tour?That was actually, ladies and gentlemen, an experimental movie that the Beatles made about a bus tour, and nobody could figure out what the Beatles were up to, either. By the same token

nobody knows what Palin’s up to. They’re all trying to figure it out. The Drive-Bys are trying to figure out what Palin is up to. Now, the interesting thing is that whatever it is she’s doing, she is doing it bypassing the media. She’s doing an end-around the media, and they’re not happy about it. They do not like this a bit. We start with a media montage of Palin getting under the skin of the Drive-Bys.

JOHN KING: Governor Palin likes to call us “the ‘lamestream’ media.” Her organization refuses to give us the schedule.

ERIN McPIKE: We don’t have a schedule! We don’t know where she’s going to be popping up!

JAMIE COLBY: She has been a bit mum about her schedule.

ALINA CHO: There is no official schedule. She has no advance teams. How can we know that she’s going to show up?

CHRIS JANSING: She wouldn’t even give out her itinerary, seemed to be avoiding answering questions.

ALTER: You need some advance notice! You can’t just have this all by the seat of her pants!

RUSH: That’s Jonathan Alter there from — where is he now, MSNBC, Daily Kos? Those Newsweek guys have all been blown up. They’re at other places now. So they’re ticked off. She won’t tell ’em where she’s gonna be popping up, there’s no schedule, no press availability. Why do they care? She’s an idiot anyway. What does it matter what Sarah Palin’s doing? She’s stupid. That’s what they think. Why should she give ’em anything? Now, she did… This ticked ’em off even more. I guess she invited Greta Van Susteren on the bus. She had Greta with her because this morning on FoxNews.com Greta’s On the Record page, Web page, they posted a clip of tonight’s interview of Palin. Van Susteren said, “Everybody trying to find out where you’re going, what you’re doing. What do you say about that, because everybody seems to be talking about it?”

PALIN: I don’t think I owe anything to the mainstream media. I think that it would be a mistake for me to become some kind of conventional politician, and doing things the way it’s always been done with the media in terms of relationship with them telling them to come along. “We’ll orchestrate this, we’ll script this, and we’ll basically write a story for you, media, about what we’re doing every day!” No, I want them to have to do a little bit of work on a tour like this. It’s not about me, it’s not a publicity-seeking tour, it’s about highlighting the great things about America, and the media can figure out where we’re going if they do their investigative work or they’re gonna keep, kinda, as you put it, going crazy trying to figure out what we’re doing here.

RUSH: You know, she’s got a point. They’re sitting around waiting for an itinerary so they know where to go. She said they can do a little work, follow us. All they’ve got to do is investigative work and follow us. I mean the bus is clearly viewable; it’s not invisible. I kind of like this. (interruption) What, you don’t like that, Snerdley? Well, of course it… Well, now, Snerdley… Snerdley says it’s not gonna sit well. Nothing she does is gonna sit well. This she knows. Now, yesterday, yesterday on Fox & Friends, Peter Doocy talked to Palin. They taped this Sunday in Arlington, Virginia. It’s on the Rolling Thunder Tour. And Doocy said, “Are all of your events on the bus tour gonna be this loud?” ’cause she was with The Biker Boys.

RUSH: All right, so George Will is convinced that there’s no way the American people would ever give Sarah Palin nuclear weapons. We would readily give them to Barack Obama, but no way would we ever give Sarah Palin nuclear weapons — and would one of these sound bite tours be complete without, ladies and gentlemen, the contributions of David Brooks? No! New York Times. He was on Meet the Press during the roundtable on Sunday, and this is what he said about the Rolling Thunder bus tour with Sarah Palin.

BROOKS: She can manage her brand, but running for president is not American Idol. And I — I think people may agree with her, they may like her, but that doesn’t mean they’re gonna vote for her. She’s just not a team player. This is a team sport. Just take one little thing she did this week. She’s taking her bus up to New Hampshire. She doesn’t call the Republican Party in New Hampshire and tell them where she’s gonna appear, what she’s gonna do. So you gotta play as part of the party, gotta play as part of the team. She’s not a team player.

They can’t stand the fact she didn’t call the Republican Party in New Hampshire. They can’t stand the fact that she’s not a team player. Of course, when she was on the team, where were they? They were doing everything they could… (interruption) They weren’t stabbing her in the back, Snerdley. They were stabbing her in the front trying to get rid of her. They weren’t stabbing her in the back. David Brooks, one more before we go to break. Michele Norris on Friday night. All Things Considered on NPR, and the cohost is Michele Norris, and she talking to Brooks. She said, “Governor Rick Perry of Texas says he’s now considering running in 2012. Perry is one candidate we really haven’t spent much time talking about. Should we assume that a governor from a big state like Texas will automatically shake up the candidate pool?”

BROOKS: There was a general view among Republicans that governors in Texas has been tried and maybe they shouldn’t go back to that well again so soon. I would say this week sort of belongs to Jon Huntsman among those who talk about such things, the former governor of Utah, his stock has suddenly risen and I would say he seems to have entered the Big Three of Huntsman, Pawlenty, and Romney.

RUSH: What is this, “among those who talk about those things”? Among those who talk about those things, ahem, see, Huntsman’s stock has risen. Yeah, because he’s so much in support of cap and trade and a number of other things that no Republican is ever going to be elected on. One more. One more bite before we go to break, is Andrew Sullivan, he was on Chris Matthews’ syndicated show on Sunday morning. Andrew Sullivan is… (sigh) Gosh, where did he go? He shows up where? Daily Beast blog, The Dish, it says here. At any rate, Chris Matthews said to Andrew Sullivan, “Let’s go to Palin. You love Palin. In some strange way you’re fascinated by her, Andrew?”

SULLIVAN: As I said many times, she started running the day after 2008 election ended, and there’s no reason to believe she isn’t running. I do think Washington has misread her, underestimated her.

RUSH: Andrew Sullivan (impression), “Washington has misunderstood her, misread her.” Finally they got to McCain on this, too, by the way. McCain was on Fox News Sunday. Chris Wallace talked to him. I’ll move ahead to sound bite 13. Chris Wallace said, “Can she win, Senator McCain, the Republican nominations, and can she beat” Barack Hussein Obama, mmm, mmm, mmm?

MCCAIN: Of course she can. She can. Now, whether she will or not, whether she’ll even run or not, I don’t know. 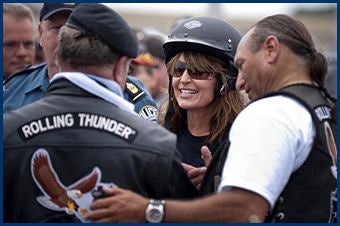 RUSH: Back to the phones is Jasmine in Chicago. Jasmine, hi. Glad you waited. Welcome to the EIB Network. Hi.

CALLER: Hi, Rush. As a former registered Democrat and a Hispanic woman who used to work in the media, I gotta tell you that that other Chicago caller — the guy who says that the Chicago media will win for Obama — it’s not true, because I’ve been doing a little digging on my own as a stay-at-home mom and a part-time, self-employed woman; and I found something that was quite startling; and it was A.B. Culvahouse, a prominent Washington attorney who was counsel to Ronald Reagan. He did the vetting for Senator John McCain for the vice presidential pick, and he told at a National Press Club conference that he had that they asked Sarah Palin if she was prepared to use nuclear weapons in the defense of the American homeland, and he said that she knocked it out of the park. So all people have to do is actually don’t go to the old media. I wouldn’t even call them “mainstream,” they’re such a dying breed. Get rid of the old media, go and do their own homework. You can find this on C-SPAN, C-SPAN aired it, and Culvahouse himself said that she impressed even his most cynical colleagues. So George Will has it completely wrong. (chuckles) He should do his homework.

RUSH: Interesting comment. He said it’s the unspoken question that everybody asks, that it’s hardly ever stated aloud anymore, but when it comes to Palin using nuclear weapons there’s not a soul in the country that would ever give her authority and control over their launching, the use. You are right about something. In the vice presidential vetting process, that is something that is delved into quite deeply, and this Culvahouse guy… Look, there’s a lot in the conservative media that I wish I could explain to all of you in a cogent, simple way, explain it. I can’t; I don’t know. All I could do is speculate. The best I can come up with is it’s Ruling Class versus non-Ruling Class and that kind of thing. Clearly —

CALLER: They were vetting her, Rush.

RUSH: CBS News, ladies and gentlemen, has told us now why they are so ticked off at Sarah Palin for not telling anybody where she’s going. I have here holding in my formerly nicotine-stained fingers. “It adds up to a dangerous situation, says CBS News Producer Ryan Corsaro. … Since Palin and her team won’t share where the potential candidate is headed, reporters and producers have little choice but to simply stay close to Palin’s bus. This has resulted in scenes of the Palin bus tooling down the highway followed by a caravan of 10 or 15 vehicles – including a massive CNN bus – all trying to make sure they don’t lose sight of the Palin bus.” So she’s creating a traffic nightmare. She is putting people in harm’s way by not telling anybody where she’s going, because she’s created this caravan of press people — including the CNN bus — following her everywhere, and that’s just too dangerous.

Ryan Corsaro, the producer at CBS: “I just hope to God that one of these young producers with a camera whose bosses are making them follow Sarah Palin as a potential Republican candidate don’t get in a car crash, because this is dangerous.” Holy smokes! How much traffic is there, on the Memorial Day weekend on the Interstate Highway System anyway? And, now, Sarah Palin’s bus is out there — because these people have to stay close, you see. They can’t lose sight of the bus because she’s not telling them where they’re going. She is presenting a traffic nightmare. She’s putting people in harm’s way. I tell you, folks: She has rendered them totally irrational. She’s making utter fools of these people, as they are plunging to new depths to come up with anything they think is legitimate criticism of her. This is the biggest stretch yet.