Dems Can’t Steal in a Landslide

RUSH: Tennessee, Rich, thank you for the call. I appreciate your waiting, too. Hello.

CALLER: First off, kudos on giving Ryan Rhodes the iPad and the Mac yesterday. He earned that.

CALLER: Okay, my question is you and all the rest of us who are conservative know the election should be a landslide.

CALLER: But what’s to keep the Democrats from dirty tricks and tactics like the Panthers or screaming foul after Obama loses reelection.

RUSH: Absolutely nothing. But if it’s a landslide, they can’t cheat enough to overcome a landslide. 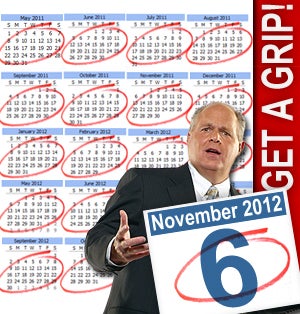 CALLER: So you think there’s no way they can get away with it?

RUSH: Nah, if it’s a landslide, no. There’s not that much cheating they can do. Remember, if circumstances don’t change, and that’s such a huge “if,” so much is going to change, but there’s not a whole lot of enthusiasm for Obama right now, that’s why the bus tour. Fraud and all that does happen. In close races it can make a difference, but they can’t cheat enough. There aren’t enough dead people in Chicago and West Virginia to overcome a landslide.

RUSH: That’s right. That’s exactly right. You’re gonna see the polls change. All kinds of stuff is gonna happen to try to dispirit you, Rich. Democrats are gonna be oversampled in polls, and what’s been happening in recent elections — you remember what happened in 2004? When I think back to this, I just laugh myself silly. The exit polls came out, the two o’clock wave, had Kerry winning big, five o’clock wave the exit polls came out, Kerry winning big. And Bob Shrum walks into Kerry’s office, “May I be the first to say congratulations, Mr. President,” so forth. Then the real votes start being counted, and it wasn’t even close.

Kerry wasn’t even close. They even rigged the exit polls to try to dispirit turnout later in the day because they knew that the exit poll wave would be reported, and so if you hear that the election’s over and Kerry’s been elected, two or three in the afternoon and you haven’t voted yet, why bother? And then after the results the real votes came in, then the left, some of the kooks on their blogs on the left thought that there had been some fraud and that the exit polls were right and that the actual vote count was wrong, and they wanted all kinds of investigations. If it’s a landslide, there’s not enough fraud, deceit, and cheating to overcome a landslide. Close race, yeah, but not in a landslide. Don’t worry about it.