RUSH: Chip in Fort Worth. It’s great to have you on the program. Hi.

RUSH: Happy to have you here, sir.

CALLER: I wanted to ask you what your thoughts were on the Department of Justice, got your two field supervisors, your deputy directors of the ops in the west all getting promotions and sent up to Washington in this Fast and Furious gun debacle.

RUSH: My thoughts on Fast and Furious have been pretty consistent from the beginning, and the detail that you just mentioned I think confirms for me that I think this thing all started 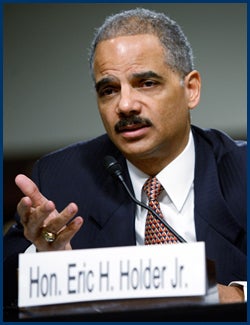 out as an effort by the regime to gin up anti-gun sentiment in America, and it went wrong. It went haywire. I think they tried to secretly get all of these assault weapons in the hands of Mexican drug lords. And then knowing full well what Mexican drug lords would do with them as they’re gunning people down. Then the news would hit that Mexican drug lords were using American-bought weapons. And how did they get ’em? Why, they just crossed the border and went to a gun show in Phoenix or they went to a gun shop in Phoenix. Look how easy it was and they’re killing people.

But then something went wrong with the whole plan. It was learned that the government actually arranged for the guns to end up in the hands of the Mexican drug lords. So all you can do is speculate here, but with some of these people getting promotions, it’s a way of keeping them quiet, or it’s a way of saying job well done, what have you. It’s also a way of making sure that there’s always a cloud of doubt about was the government really involved in this? Was the regime really behind all this? But I’ll just say, this is one of those stories, if this were a Republican president and something like this had happened, front page news, impeachment would be shouted on the front pages of newspapers, how dare this man imperil American lives? What a harebrained scheme. It barely gets any attention in the Drive-By Media. Did you know, by the way — I’m gonna give you a little factoid here — Fast and Furious only tracked one gun, and then for only half a day, then they lost track. Do you also realize that Fast and Furious, to a whole bunch of people in this country, is a bunch of automobile movies?