CALLER: Hi. Nice to talk to you, Rush.

CALLER: How you doing today?

RUSH: I’m just kicking back and doing great. How are you? 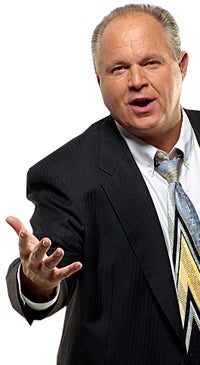 CALLER: To some people.

CALLER: To some people.

RUSH: No, it’s not “threatening” to people. That’s not it. Unions don’t threaten anybody. Well, now, some people are threatened by Obama’s union thugs like the SEIU people who beat up black people in wheelchairs at campaign events in St. Louis.

RUSH: But you have to specify what kind of union you mean. Are you a private sector union member?

RUSH: Okay. Most of the attention on labor unions in the past 12 months has been focused on government union, particularly state union workers.

RUSH: They and their federal cohorts earn, on average, twice what similar workers in the private sector earn. Now, you may say, “Well, that’s cool. We all want people to make more money.” No, the problem is that they are being paid by their private sector cohorts.

RUSH: Public sector workers are being paid by their neighbors.

RUSH: But the problem is that it’s a political thing. It’s not working conditions. The public sector worker unions, state and local, almost all vote Democrat. Their dues are siphoned and end up in the Democrat Party campaign coffers.

RUSH: Well, welcome to the club. But the fight in Wisconsin was totally about the fact that the state union workers didn’t think they should have to pay a dime toward their own health care or retirement. They eventually agreed to. They lost the fight and then they lost their collective bargaining rights, but that’s because they were bargaining against the citizens of the state. Public sector unions are not bargaining against some fat cat, corporate jet-flying, cigar-chomping guy staying in hotel suites drinking booze all day long — you know, the caricature of the big corporate boss.

There are two separate types of unions that were being discussed here, but the whole idea of being “threatened” by people who want better working conditions is not at all what this is about. It’s about fiscal responsibility. It can’t be sustained! Situations where the people paying salaries are paying twice what they earn are then being told, “You gotta pay that for as long as that employee lives”? It can’t be sustained. It’s not fair. It doesn’t make any economic sense. That’s what the battle was about. The Democrats want all of that money because it just ends up back in their campaign efforts, pure and simple.