RUSH: Mary in Baltimore, welcome to the EIB Network. Great to have you here.

CALLER: Hi, Rush. I first heard you in 1988 when I was sailing down the coast of California, and I was so happy that there was a voice for us.

CALLER: What I wanted to say was I ran to the telephone today because the Obama regime is a criminal enterprise equal to the Mafia or Al Capone. They’re just operating… They’re 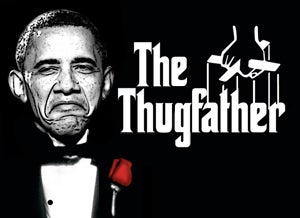 flaunting the law. They’re flouting the law, whatever. This AT&T thing?

CALLER: The raid on the Gibson guitar company yesterday or this week or whatever it was is just a warning to all companies do not vote for Republicans.

RUSH: That is interesting because the guy that runs Gibson is a Republican donor and he gets raided for using wood that’s somehow rare and protected. A Democrat owner of a guitar company making the same kind of wood donates to Obama and doesn’t get raided, and people are asking about this. There’s a post at National Review Online or something: Is it really as simple as that, that this regime will target opponents who don’t donate to them? Yeah, it is that simple! Gibson’s also nonunion. So I can understand you want to call this bunch a thugocracy, I can understand where you’re coming from.