Pelosi Goes Nuts on the “Rich”

RUSH: This is August 21st, basically ten days ago. Andre Carson, the sound bites we played about him saying that Tea Partiers want to hang or lynch blacks, that comment was made August 22nd. It took nine days for it to surface. Pelosi’s comments, she was at a Democrat brunch in San Francisco back on August 21st, ten days ago, and we got two sound bites from Pelosi. Here’s the first.

PELOSI: What more do they want? They have a number of homes, the bigger the yacht, da da da da da, the taller the mast, the whole thing. They have museum quality art. They want immortality. (laughter) They want so much money that their names are all, for prestige they could never get any other way, they could buy with endless money. Because what else could you possibly want?

RUSH: What more do they want? They got a number of homes, the bigger the yachts, the taller the mast, the whole thing — she’s talking, I don’t know whether she knows it or not, 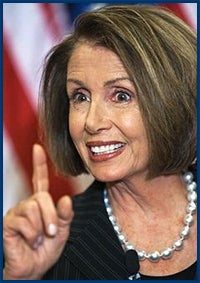 about Democrats. Now, her husband’s very wealthy, so Pelosi by virtue of marriage is very wealthy. But this largest mast business, I’m probably gonna get myself into trouble here. I don’t know if this is still true, but there’s an author out there by the name of Michael Lewis, and he wrote a book called The New New Thing. It was the story of Jim Clark who founded Netscape, which no longer exists. I read the book and I’ve met Jim Clark. He lives here. I was at a dinner once with Jim Clark where he almost left. He said, “I can’t believe I’m in the same room with Rush Limbaugh.”

This book was about Jim Clark building the biggest sailboat in the world, with all of his wealth from Netscape, and about the trials and tribulations of building this sailboat and the limitations of where it could go because the mast is so high, and some bridges, of course, are not high enough for the mast. The thing apparently is huge, took years, they had problems with all the electronics on board this sailboat. Pelosi is talking about, at least at the time, a Democrat. A Democrat had the largest sailboat in the country. And I don’t know if he still has the largest sailboat or somebody’s built one bigger or not. Then this business of they want immortality, so much money that their names for prestige they could never get any other way, they’re buying — what is she talking about? Putting your name on the wing of a hospital, for example, donating to a hospital and getting your name on a wing, that’s the kind of stuff she’s talking about.

PELOSI: Clean air, clean water, food safety, reform on Wall Street, protections for consumers, you name it, forget about it. They’re defunding every initiative in that regard. You wonder, do their children breathe air, do they drink water, why do they not care? But they don’t.

PELOSI: In the first 100 hours we raised the minimum wage.

RUSH: Get this, now.

PELOSI: It was the first time the minimum wage was raised in 11 years.

RUSH: Now, listen to this.

PELOSI: It was kept down for the purpose that people would not be able to live on that. They’d have to borrow, get home equity loans against their mortgage. They’d have to live on credit cards, and what are they doing when they do that? They’re paying fees to the banks. They’re paying fees to the banks. So it was a contrived dependence on private credit for millions, tens of millions of working people in our country. Keep people dependent on penny fees to banks for the use of their own money.