The Left is Petrified of Rick Perry

RUSH: Powell, Wyoming. Mike, thank you for calling, sir. Great to have you on the Rush Limbaugh program. Hello.

CALLER: I just wondered where George Stephanopoulos’ sudden love of Mitt Romney last night on his program portrayed Perry as evil, and he loves Mitt Romney now; and you were saying with Rick Perry’s first, you know, being on the panel for the debates, I just wonder, you know: Is this all coordinated, or are they laughing, or is it true coordination? Are they really gonna try and prop up Romney just because Rick Perry is scaring ’em so bad, or…? I just wanted to get your feelings on that. 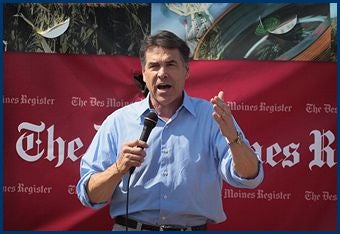 RUSH: Your buddy Stephanopoulos, transparent as he can be if he’s sidling up to Romney right now. Your interpretation that’s right on the money, you know exactly what that’s about.

CALLER: The images, the guns and the, “Move to California if you support gay marriage,” and all the other things that, you know, Georgie put on last night was just amazing how much he loves Mitt now.

RUSH: I think so. I think so. Since you say you’re watching “Georgie,” I haven’t watched a network nightly newscast I can’t tell you how long. It’s been years since I actually saw one. So I have to listen to your report to find out what happened. I didn’t know. I’m not afraid to admit this. I did not know that Stephanopoulos, all of a sudden, fell in love with Mitt Romney, but it doesn’t surprise me. It makes total sense. It’s totally understandable, given who they’re really afraid of out there.