Tea Party Knows the Status Quo is No Longer Sustainable


RUSH: We’re going to start in Fort Worth, Texas, with Arthur. Arthur, great to have you on the EIB Network. Hello.

CALLER: Mega dittos, Rush! It’s a pleasure to be on your show.

CALLER: I’m 65 years old, a senior citizen, and I’m just wondering why these politicians, pundits, and pooh-bahs think that nobody can talk about Social Security ’cause it’ll scare the seniors. What the hell is that idea? I’m on the Internet every day, all my peers are on the Internet every day. We’re informed, we’re involved. That is so much malarkey, I just can’t believe it.

RUSH: Well, it stems from a 50-year plan. Well, not plan. It’s an actual program. The Democrats have been accusing Republicans of wanting to take Social Security away from you for 50 years, and over the years Social Security recipients have believed it, and they’ve been persuaded to vote Democrat on the basis of that charge.

CALLER: Well, I believe those days are over now because, you know, we know something’s gotta be done about it or our children and our grandkids are just gonna be SOL.
RUSH: Well, I think that’s the situation, too. I think more and more seasoned citizens are very much aware of it. The evidence is clear when you look at membership in the Tea 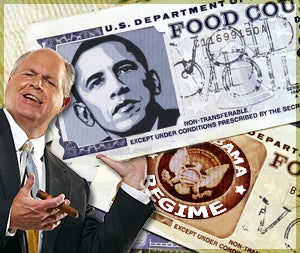 The very people who are destroying it and who refuse to fix it, then set themselves up as its great defenders. That’s the point of all this. Meanwhile, who is taking money out of Medicare? Obama! Who is destroying jobs? Obama! Who is destroying home ownership? Obama! Who is destroying the value of pensions and investments overall? Obama. Who is responsible for now an out-of-control escalation in the prices of health care? Obama. I say to all of you within the sound of my mellifluous voice: It may well have been true that in years past all of this irresponsibility in Washington was a joint effort, but whatever went on in the past pales in comparison to what one man and his party have done in three years.

The problem isn’t only the Democrats, but the establishment Republicans. The establishment Republicans join in trashing conservatives who want to actually fix this and other problems. But even the establishment Republicans, for all their problems and weaknesses, are not destroying jobs. Yes, it was Obama who cut $500 billion out of Medicare in order to bring the cost of Obamacare under the magical, mythical figure of a trillion dollars so that it could be scored on a bogus basis by the Congressional Budget Office. We had the story yesterday that premiums are way up, more and more people are losing their health insurance, and we have only just begun to implement this program.

The full damage is nowhere near being implemented yet. Most of it won’t happen ’til after 2012 or 2013, once Obama’s no longer accountable for it. The Ruling Class, which would include the establishment Republicans, tell us we can’t talk about Social Security because they don’t want us to talk about Social Security, because they want to use that money when they get back in power for their own purposes. It may be “incidiary,” but that’s the truth. So this problem is real, and it’s another reason why there is the Tea Party: Responsible Americans who understand that what’s going on is no longer sustainable. The status quo can no longer be.