Andre Carson Should Stick with It

CARSON: This is the effort that we’re seeing of Jim Crow. Some of these folks in Congress right now would love to see us as second-class citizens.

CARSON: Some of them in Congress right now with this Tea Party movement would love to see you and me — I’m sorry, Mr. Chairman — hanging on a tree. 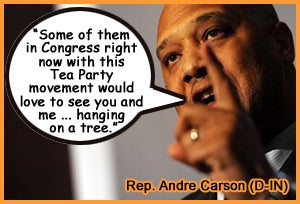 RUSH: Yep. Tea Party wants to see black people hanging on trees, i.e., being lynched. Last night he went on CNN The Situation Room and tried to explain what he meant.

CARSON: I stand on the truth of what I spoke. My intentions weren’t to hurt anyone or any group.

RUSH: The only thing he didn’t say was, that wasn’t me. What do you mean, “I stand on the truth of what I spoke. My intentions weren’t to hurt anybody or any group?” Of course they were! Then he continued.

CARSON: My language was, of course, figurative, but having said that, I still — my intentions weren’t to hurt anyone, but I want to see that we’re one America, white brothers and sisters, black brothers and sisters, across the racial spectrum coming together to help create jobs, to help empower small businesses, to help bolster our educational system and move this country forward and reclaim the crown as the greatest nation on earth.

RUSH: That’s not what you said. He didn’t come close to anywhere saying that. “My language of was, of course, figurative, but having said that my intentions weren’t to hurt anybody, but I want to see that we’re one America.” How do you get from they want us hanging from trees to I want one America? How do you get there? You know, Andre, it would be better if you just stuck with it. You’d get a lot more respect if you just stuck with it. The truth of the matter is that it’s us conservatives who want to see all Americans become first class citizens. And, frankly, Mr. Carson, we look at people like you as a roadblock. I don’t know what you have been doing, but the people that live in your district are not doing well. Nor are Maxine Waters’ people, nor are John Conyers’ people that you been looking out for ’em for who knows how many decades. You blame everybody else for it.

You and your president have been schooled in radicalism, not Americanism. Radicalism, Americanism do not mix. I don’t know about you, Mr. Carson, but I know that President Obama views the misery of others as a necessary step that must be taken to change this country. I look at the record, I look at what he’s done, I look at his policies, no level of unemployment, homelessness, deficits, will deter him. He’s gonna keep going. I’ll tell you, when it comes to racism, I can’t think of a single conservative I know who would not be thrilled to see the ability to detect skin color simply disappear from the human race. And I, frankly, as a conservative, and all the conservatives I know, can’t think of a single one that would not be thrilled if there were a revival of economic triumphalism in the black community, because we want a great country, and we want everybody in this country loving it.

We want an exceptional country, and we know that that can only happen with exceptional individuals, not exceptional government. I can’t think of a single left-wing race-baiter who would want any of this. The left wing race-baiters that I know are comfortable with the status quo because it gives them their platform to exist. I think the only reason that race is still an issue in this country is the left keeps it as an issue. Real Americans judge each other on merits and they want to judge each other on merits. Real Americans are sick and tired of all this racial division. Real Americans are sick and tired of things like affirmative action, any other policy that separates and segregates people. We’re tired of it, because it hurts the country. It does not advance anything other than the left-wing race-baiting industry, and government, socialism and these kinds of things.

Look at this. “Worker productivity fell this spring in the United States at the faster pace than previously estimated while labor costs were rising at a faster clip.” And it says here, this is AP, “both developments could pose threats to a fragile economic recovery.” There is no recovery, and they do pose threats! “Productivity declined at an annual rate of 0.7% in the April-June period, a bigger drop than the 0.3% decline reported a month ago. Labor costs rose at an annual rate of 3.3%, faster than the 2.4% increase originally reported. Declining productivity, if it persists for a prolonged period, would represent a serious economic threat, while raising labor costs would cut into corporate profits.” Sounds like a perfect storm to me. The thing is I like rising labor costs. I like people earning more money as a result of greater productivity. I like it, because everybody wins.

RUSH: Richmond, Virginia. Hi, Karen, great to have you with us. Hello.

CALLER: Oh, Rush, thank you so much for taking my call. Tea Partier dittos to you, and before I make my main point, let me just say what you were talking about earlier. The Black Caucus?

CALLER: If any of these people had ever bothered to attend a rally, which I’ve been to all of them, they would know that there were plenty of blacks in the crowd and plenty of Latinos.

RUSH: It doesn’t matter. They would beat ’em up!

CALLER: Oh! (laughing) Well, they were there.

RUSH: It’s what happened in St. Louis: A poor black kid in a wheelchair got beat up by Obama union thugs.

RUSH: Look, there’s no convincing these people. We’re not gonna convert them. They have to be defeated. Pure and simple, they have to be defeated — and it shouldn’t be that hard. They represent 30% of the thinking in this country. They are not anywhere near a majority. Tea Partiers represent the majority of thinking — socially, fiscally, character, mortality, all that, the Tea Party represents the vast majority of thought — and they know it, and that’s why they’re threatened by it. They know that they’re a minority movement. It irritates them to no end. But they have to be defeated. They’re not gonna be converted. If they were to show up at a Tea Party thing… Andre Carson showed up at a Tea Party meeting, wouldn’t change a word of what he said. He’d call the blacks that were there Uncle Toms. They’d be no different than Clarence Thomas or Condoleezza Rice.