Grand Slam Shelby Steele: Obama and the Burden of Exceptionalism

RUSH: Now here’s Shelby Steele, and you will recognize that you’ve heard much of this on this program, but I love this. It’s in the Wall Street Journal, and as you know, every time Shelby Steele writes on this subject, I trumpet it; share it with you almost verbatim. He writes, ” If I’ve heard it once, I’ve heard it a hundred times: President Obama is destroying the country. Some say this destructiveness is intended; most say it is inadvertent, an outgrowth of inexperience, ideological wrong-headedness and an oddly < character. Indeed, on the matter of Mr. Obama's character, today's left now sounds like the right of three years ago.

“They have begun to see through the man and are surprised at how little is there.” That’s Shelby Steele describing the American left. “Yet there is something more than 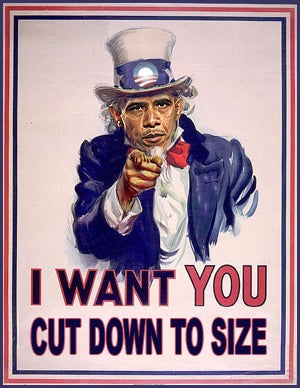 inexperience or lack of character that defines this presidency: Mr. Obama came of age in a bubble of post-’60s liberalism that conditioned him to be an adversary of American exceptionalism. In this liberalism America’s exceptional status in the world follows from a bargain with the devil — an indulgence in militarism, racism, sexism, corporate greed, and environmental disregard as the means to a broad economic, military, and even cultural supremacy in the world. And therefore America’s greatness is as much the fruit of evil as of a devotion to freedom.”

This is so right on the money. It’s just another way of saying Obama’s got a chip on his shoulder because of the way he was educated: This country has gotten where it is via immoral acts, stealing the world’s resources as our own, impoverishing people around the world. This is what he believes. “Mr. Obama did not explicitly run on an anti-exceptionalism platform. Yet once he was elected it became clear that his idea of how and where to apply presidential power was shaped precisely by this brand of liberalism. There was his devotion to big government, his passion for redistribution, and his scolding and scapegoating of Wall Street — as if his mandate was somehow to overcome … American capitalism itself.” Right on. Dead, right on. “Anti-exceptionalism has clearly shaped his ‘leading from behind’ profile abroad — an offer of self-effacement to offset the presumed American evil of swaggering cowboyism. Once in office his ‘hope and change’ campaign slogan came to look like the ‘hope’ of overcoming American exceptionalism and ‘change’ away from it.”

Dead on again! “So, in Mr. Obama, America gained a president with ambivalence, if not some antipathy, toward the singular greatness of the nation he had been elected to lead.” Every paragraph here is a grand-slam, home-run. “But then again, the American people did elect him. Clearly Americans were looking for a new kind of exceptionalism in him (a black president would show America to have achieved near perfect social mobility). But were they also looking for — in Mr. Obama — an assault on America’s bedrock exceptionalism of military, economic and cultural pre-eminence? American exceptionalism is, among other things, the result of a difficult rigor: the use of individual initiative as the engine of development within a society that strives to ensure individual freedom through the rule of law.

“Over time a society like this will become great. This is how … America evolved into an exceptional nation. Yet today America is fighting in a number of Muslim countries, and that number is as likely to rise as to fall. Our exceptionalism saddles us with overwhelming burdens. The entire world comes to our door when there is real trouble, and every day we spill blood and treasure in foreign lands — even as anti-Americanism plays around the world like a hit record. At home the values that made us exceptional have been smeared with derision. Individual initiative and individual responsibility — the very engines of our exceptionalism — now carry a stigma of hypocrisy. For centuries America made sure that no amount of initiative would lift minorities and women.

“So in liberal quarters today … these values are seen as little more than the cynical remnants of a bygone era. Talk of ‘merit’ or ‘a competition of excellence’ in the admissions office of any Ivy League university today, and then stand by for the howls of incredulous laughter. Our national exceptionalism both burdens and defames us, yet it remains our fate. We make others anxious, envious, resentful, admiring and sometimes hate-driven. There’s a reason al Qaeda operatives targeted the U.S. on 9/11 and not, say, Buenos Aires. They wanted to enrich their act of evil with the gravitas of American exceptionalism. They wanted to steal our thunder.

“So we Americans cannot help but feel some ambivalence toward our singularity in the world — with its draining entanglements abroad, the selfless demands it makes on both our military and our taxpayers, and all the false charges of imperial hubris it incurs. Therefore it is not surprising that America developed a liberalism — a political left — that took issue with our exceptionalism. It is a left that has no more fervent mission than to recast our greatness as the product of racism, imperialism and unbridled capitalism.”

“But this leaves the left mired in an absurdity: It seeks to trade the burdens of greatness for the relief of mediocrity. When greatness fades, when a nation contracts to a middling place in the world, then the world in fact no longer knocks on its door. … To civilize America, to redeem the nation from its supposed avarice and hubris, the American left effectively makes a virtue of decline — as if we can redeem America only by making her indistinguishable from lesser nations.” As I tell you, Shelby Steele, Wall Street Journal, every paragraph is a grand-slam. And I got more.

“Since the ’60s we have enfeebled our public education system even as our wealth has expanded. Moral and cultural relativism now obscure individual responsibility. We are uninspired in the wars we fight, calculating our withdrawal even before we begin — and then we fight with a self-conscious, almost bureaucratic minimalism that makes the wars interminable. America seems to be facing a pivotal moment: Do we move ahead by advancing or by receding — by reaffirming the values that made us exceptional or by letting go of those values, so that a creeping mediocrity begins to spare us the burdens of greatness?

“As a president, Barack Obama has been a force for mediocrity. He has banked more on the hopeless interventions of government than on the exceptionalism of the people. His greatest weakness as a president is a limp confidence in his countrymen. He is afraid to ask difficult things of them.” No, he’s not afraid to ask. He doesn’t want greatness in the individual; it would overshadow government. He is an obstacle to greatness, by design. Continuing now with professor Steele.

“Like me, he is black, and it was the government that in part saved us from the ignorances of the people. So the concept of the exceptionalism — the genius for freedom — of the American people may still be a stretch for him. But in fact he was elected to make that stretch. It should be held against him that he has failed to do so.” Shelby Steele, senior fellow, Stanford University Hoover Institution. Among his books is White Guilt, that book quoted extensively on this program. As a president, Obama has been a force for mediocrity. Doesn’t believe in American exceptionalism. Believes American greatness is illegitimate, must now be paid for. We must be a nation in decline so that we end up being no better than any other nation, ’cause our greatness did not come from anything legitimate. It came from theft and other things. That’s what we’re faced with. The people of this country would rather watch millionaires playing football on teams owned by billionaires than watch a president going on and on with class warfare in the House chamber. If you know that, you know America.