RUSH: Here’s Tom Friedman, he was on Meet the Press, Thomas “Loopy” Friedman. And David Gregory was asking him about Sarah Palin: “She was in Iowa over the weekend dropping hints and making speeches. Will she run, Tom Friedman? There’s still a great deal of interest in Sarah Palin as this political force in the middle of this huge conversation that we’re trying to have.”

FRIEDMAN: Well, to me personally that’s a sign of the apocalypse, because this woman, everything I hear from her is — has nothing to do with what we argue in our book, the long-term trends of where our country is at. There is no short-term solution. It’s not just getting rid of Obama.

RUSH: Oh, yes, it is. Oh, yes, it is. It is just getting rid of Obama. I mean that’s not it in total, but, boy, what a major step that would be. There’s nothing we can do in the short term. 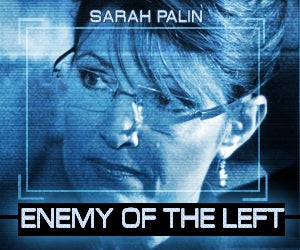 Long-term trends where the country is at. There is no short-term solution. So why do anything? Why do anything at all? The simple truth is we will not solve our country’s unemployment problem until Barack Obama himself is unemployed. It’s that simple, folks. Speaking of Palin, here she is in Manchester, New Hampshire, Tea Party rally.

PALIN: You’ve already withstood the wrath and the disdain and the lies from the media and the permanent political class looking down on us, mocking us, making things up about us, telling us to go to hell. You’ve already withstood that. We’re still standing, right? You’re here today, standing strong, committed to restoring all that’s good about America. It’s with a strong spine that you are still standing. You’re here today, standing tall because you know what is at stake, and it’s our children’s future that is at stake.

RUSH: Tormenting the media, Sarah Palin, who to Thomas “Loopy” Friedman represents the apocalypse because she won’t go away. And she continued.

PALIN: We need to hear from those who can do more than just talk, because we tried that, didn’t we, voters? Been there, done that, with a candidate who can just talk but doesn’t have any kind of record of accomplishment and success, successfully reforming those things that are wrong. What we need is we need people with a proven record of reform, and who are willing to take on the tough challenges, to run into danger, if you will not run away from it. We need a pro-growth agenda. (crowd chanting run, Sarah, run) I appreciate your encouragement. I do.

RUSH: They hate that. They hate when they hear “Run, Sarah, run.” They despise the Tea Party still being optimistic and uplifting.