Rush Baby: How Can I Do More?

RUSH: Mark in Philadelphia. Mark, welcome to the EIB Network. Great to have you here, sir.

CALLER: Hey, Rush. Man, so exciting to talk to you. I’m so glad you take my call.

CALLER: Yeah, I’m calling you because I was really inspired a couple of weeks ago. I’ve listened to you for a long time and I was inspired by, you know, Ryan Rhodes and what he did, just being polite and asking the president a question, but being up front about it and just how he’s outspoken and just getting out there. You know, for the longest time… I’m just hoping you could put me in the right direction because for the longest time I’ve been wanting to get more about this. I want to do more, you know, I’ve written my favorite GOP candidate, offering my support and assistance. I sound like a broken record to my friends and my family. I listen to you everyday. You know, I just want to do more. Is there any advice you can give me?

RUSH: Well, first so people know who you’re talking about: Ryan Rhodes the Tea Party guy that challenged President Obama at one of Obama’s many jobs forums, and I ended 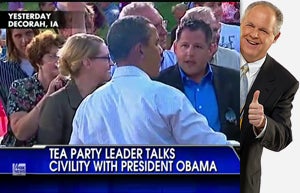 up giving the guy a Mac I think because he was using an old computer.

RUSH: Yeah, he was using an Acer. Yeah, I think you fall into the category of a lot of people. You are looking for leadership.

RUSH: Well, don’t lose your passion, and don’t lose your desire, and remain patient. Stay on the course that you’re on. Opportunities will pop up as long as you don’t have a goal structure that’s too narrow. Now, basically, you want to have impact.

RUSH: You want to make a difference. You want to matter and so forth. You don’t want to just sit around and think and be on the right side when your thinking is correct and so forth; you want action associated with it.

RUSH: And, you know, I think one of the best things that you could do… How old are you?

RUSH: Twenty-five. I think an interesting project for you would be to start honing skills of persuasion —

RUSH: — with the people your age. You say you want to make a difference.

RUSH: You don’t have microphone yet, you don’t have a TV show — but stand by because everybody does standpoint in their lives have a radio show.

RUSH: You, too, will have a radio show someday. It will be a podcast. It’ll be on Facebook or Twitter something.

RUSH: And even if they’re people that don’t care, try to make ’em care.

RUSH: You know, I just had a golf trip in Hawaii, usual bunch of guys, and some of them couldn’t care less. They don’t care. And others of us, all we do at dinner is talk and get passionate about this, and the ones that don’t care get bored and frustrated, and so we tried to make it interesting. We tried to get these guys to care. They’ve got kids. We tried to make ’em understand why this is important.

RUSH: Their attitude is it’s all gonna work out however it works out, and they’ll deal with that as it happens. That’s their attitude. You don’t want to wait for things to work out. You want to impact the way they work out. 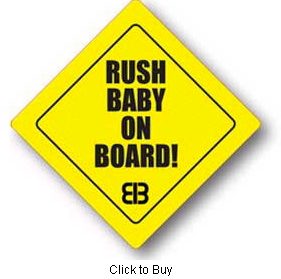 become Obama Jr. with my advice.

RUSH: I’m just saying that whenever you have a chance, persuade. You have conversations with people about this stuff, do you not?

RUSH: Every day. What’s the percentage of them that don’t care?

RUSH: And of the remaining 25%, how many disagree with you?

CALLER: Um, half and half.

RUSH: Okay. So your focus is the 75% that don’t care, and I’m telling you: That is a very important thing. Make ’em care. Find a way.

RUSH: You will have immediate feedback, immediate satisfaction, because once you succeed at this they will then become evangels or converts and start trying to do the same thing.

RUSH: As far as strategies to make ’em care, some of them may have kids, some of them may not, some of them are going to have kids someday. I’d approach that from that standpoint. I tell you, I have a lot of friends — and they’re in their late fifties and sixties — who are just now realizing that politics does matter, that it’s not just the Republicans and Democrats are pretty much the same and every election they might share power and change and the Republicans run it for four years, then the Democrats run it for four years. They’re now realizing there’s big differences between the two, that the Democrats are harmful, that the Democrats are the impediment to growth. If you can get hold of people your age and make them understand that politics matters, as you understand, your passion is gonna be the biggest selling point you’ve got here. But you don’t want to come at ’em too forcefully and drive them away.

RUSH: Just work on it. This will be your project. Figure out a way to persuade the 75% that you know that don’t care that this stuff matters.

CALLER: I will do. Thank you, Rush.

RUSH: Report back. We’ll see you. Back after this, folks. Don’t go away.

Okay, what Lady Gaga wore. What was on American Idol. Who Dr. Phil interviewed. Who stole Dr. Dre’s headphones. That stuff, right? That’s what they talk about. Pop culture, worthless crap. Or — or — well, not so much. The people I know are not trying to worry how they get more money out of us. Well, wait a minute. I’ll rethink that one.