You Can Win Free Tea for a Year

RUSH: Folks, we got thousands of e-mails asking us to repeat the Two If By Tea offer that we did a couple of months ago, the opportunity to win a year-long supply of Two If By Tea. And we listen. We listen to you in this audience so we have ramped it up even bigger. You go to TwoIfByTea.com any time from now until 11:59 p.m. tonight, you buy some tea, doesn’t matter, regular or raspberry, diet raspberry, diet regular, you make a purchase of Two If By Tea any time between now and 11:59, one minute before midnight tonight and you will be automatically entered to win free Two If By Tea for a year.

Now, we’ve upped the ante this time around. The last time we did it there were five winners. We’re doing ten winners. Ten winners will be selected at random. Each winner will 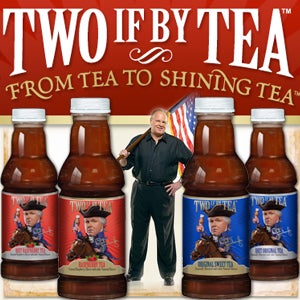 receive five cases of tea, their choice, every month for a full year. But we’re still not done. No, we barely scratched the surface. In addition to ten winners winning five cases of tea for a month for a full year, two of the ten winners will win a complimentary Select Comfort bed, the best bed out there to go along with the best tea out there. It will be the bed of your choice. The Select Comfort people make all kinds of sizes but this is the Sleep Number Bed where you and your partner can each select the firmness that you want the mattress to be.

So you’ve got the best iced tea, you got the best bed, and all you have to do is go to TwoIfByTea.com between now and one minute before midnight tonight. But we’re still not done, because even after all of this, I, El Rushbo, Rush Revere will personally call each winner to tell you that you have one. Now, we did this the last time, we called five people, we got three answering machines, we ended up talking to two people. One woman was driving, and she picked up the phone, said, “Hello,” and I said, “Hi,” blah, blah, “this is Rush Limbaugh, my wife Kathryn here, and we wanted to let you –” and we hear a screech, and there’s some noise on the other end of the line, and she says, “I almost drove off the road.” She gathered herself, gathered her composure, and we continued to tell her what she had won. She was all excited, and we talked to her for a little while and gave her some of the details.

We made another call, got a couple answering machines, and the last guy that we called actually picked up the phone, he was in Tennessee, and he was eating dinner with his family, he made it a point to tell us that. I said, “Hi, Rush Limbaugh, my wife Kathryn here, we’re calling to tell you that you have just won a year’s supply of –” “Well, I’m just sitting here eating dinner.” And we looked at the clock and it was seven o’clock our time, so it might have been seven o’clock eastern where he was, so we asked him what he was having, he told us and then he started telling me what he disagreed with me about as well as what he agreed with me about. I mean he took full occasion to tell me what-for. It was a lot of fun.

We’re going to have ten winners here, and Kathryn and I will call each one personally to notify you that you have won a year supply of tea, which is five cases per month for a year, Two If By Tea, $23.76 is the price, free shipping. You’ll have it in three days maximum after you order it. Just go to TwoIfByTea.com to shop now and if you don’t like shopping on the Internet we have a call center, very interesting people there to talk to you. The number is 866-662-1776. Now, you have to get your order in by 11:59 p.m. today. For those of you in Rio Linda, again that’s one minute before midnight, September 2nd. We have the official rules that are posted at TwoIfByTea.com. So if you are confused about anything I’ve said, which I don’t know how that would be possible, me being the communicator that I am, but if you are confused, the official rules are posted right there at TwoIfByTea.com.

So to review, you wanted more, we gave you more. Ten winners. A year supply of Two If By Tea of your choice, five cases a month and two of the ten will receive a Select Comfort Sleep Number Bed. And then each winner will be personally notified by me, and, if your answering machine answers, we’ll leave you a message. If you pick up, we’ll talk to you and we’ll have a conversation with you. So we got the best tea, the best bottle, the best label, the best icon, the best logo, nothing cheap about our bottle, nothing cheap about our label, the tea, no gunk in it. It looks great, there’s no murkiness to it, and it’s the best tea you’ve ever tasted. Those of you who have tasted it know it. Those of you who don’t yet will find out.