Opening Monologue on a Strange Day

By the way, greetings, folks. Great to have you here. A lot going on today here at the Excellence in Broadcasting Network and the Limbaugh Institute for Advanced Ideological Purity.

Now, we were told, Barack Obama brought us back from the brink, right? We’d turned the corner, we’d shifted the car from reverse to drive, and we’re told he brought us to recovery. We came out of the recession in 2009, right? Okay, cool. So what puzzles me is how could Obama do all of that in 2009, bring us out of a recession in 2009 and not do it again in 2011? The guy that brought us out of a recession has now given us another one. There’s no doubt in my mind as each day piles onto the next that this is coincidence or happenstance. This is on purpose, and by design.

At any rate, ladies and gentlemen, a lot going on today.

There’s a former Obama advisor who is a Harvard professor who is running against Scott Brown for the old Ted Kennedy Senate seat in Massachusetts. Video of this woman has gone viral on YouTube and we’ll play you the audio of it. Elizabeth Warren, she’s running for the Senate seat now held by Scott Brown, she teaches at Harvard, former Obama advisor, and I’m gonna be getting to this pretty quickly because what she said is as instructive as anything I have ever had for you to hear uttered by a liberal.

We also have Bill Clinton, who has totally cut Obama off at the knees. He has just literally thrown everything Obama is doing in his campaign right now overboard and under the bus. He has just blown up Obama’s whole class warfare strategery. He has blown up Obama’s deficit strategery. He has blown up Obama’s tax increase strategery. The whole thing, everything Obama has said in the last ten days, Clinton has undercut it. We also have in addition to Bernanke predicting a recession is coming — and there are events going on in Europe worse than happening here, and Bernanke is also talking about bailing out Europe with free money, free American money, and that’s another thing that’s unsettling people.

Snerdley, let me ask you, when you saw the news yesterday that a bill to fund the government for another three days was voted down, I said, “What? What kind of saps are we?” We’ve all believed that the debt ceiling was raised and it’s finished and it’s a done deal, and then all of a sudden there’s another vote yesterday, 48 Republicans vote with the Democrats. Now, the reason the Democrats and Republicans oppose the bill are entirely different. The Republicans don’t like any of the spending in this, and the Democrats don’t think there’s enough. But it’s being reported now that Boehner has lost the House, he’s lost total control of the House. This is another one of these continuing resolutions.

We went through this debt ceiling fight, we went through all that, we were told it was solved. We wouldn’t have to worry about this until December, depending on what the super committee did. Then there’s a vote yesterday on raising the debt limit because $500 billion has yet to be authorized or spent. And it’s another one of these continuing resolutions is all this is. This is all happening because the Democrats and Obama have not submitted a budget, pure and simple. But these 48 Republicans, the Tea Party Republicans, they’re heroes, they’re voting in the right way here and they’re standing up for what they were elected to go there and do. So there’s that to dissect and to explain. 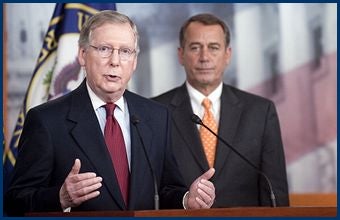 Obama is going to this bridge. I thought he did it last week. This is really a strange day. The continuing resolution, I thought that had already been done, debt ceiling already been done and there’s this vote yesterday. I thought Obama had already been to the bridge. It’s the bridge that affects both Boehner and McConnell, links Ohio and Kentucky, and the bridge, there’s no trouble. The bridge does not qualify for anything stimulus wise. No, it’s not falling down. In fact, it doesn’t even need any repairs. It’s just not big enough anymore to handle the load. They are going to build a second bridge next to it from what I understand, but it’s not gonna start for four years.

This is pure, 100% political photo-op, it’s optics, it is Obama’s bridge to nowhere, he’s going there and he’s gonna try to tell people that this is an example of the unsafe bridges, just like when he was in North Carolina, he cites 153 structurally deficient or otherwise in-bad-shape bridges. But he doesn’t identify ’em. He says that four of them are very near where he was, which was near Raleigh, Cary, North Carolina, but he didn’t identify so people’s lives apparently were in danger while Obama knew it, was doing nothing about it.

In the meantime, we had 800-some-odd billion dollars spent on shovel-ready jobs to fix the infrastructure. It didn’t happen. Instead it went to places like Solyndra and LightSquared. So he’s got a lot of questions to answer. Okay, you go off to your bridge here, you go to your bridge in North Carolina last week, and you complain and moan that nobody’s doing anything about it, you’re giving away money left and right to UAW workers and GM. In Chicago, get this, we are learning that people who haven’t been on the payroll in 15 years are hired back for one day to qualify, union people, to qualify for a pension of $158,000 a year. And that’s just the tip of the iceberg.

Oh, yeah. Folks, there’s stuff brewing here today. I mean, it’s gonna be a busy, busy, busy broadcast day. This is also the last day that you have to enter the latest big contest and promotion from TwoIfByTea.com. Now, Kathryn and I, we started this small business; and we did this, A, because we love tea and it was a natural. The timing, everything going on in the country, our patriotic roots and feelings, it just all made sense. We also wanted to do something made in America. This is made in the United States. In the midst of what Obama’s doing to the country, we wanted to actually — what it takes to start a small business and employ people; what all really is involved in it in the midst of Obamaism. So this is the last day to enter the contest.

You gotta place an order by 11:59 p.m. tonight at TwoIfByTea.com in order to win the grand prize, which is a year-long supply of TwoIfByTea.com. Two cases a month is the way we’re defining that for this contest. I know, some of you say, “It was five cases last time!” Well, yeah, we change it up because we changed the whole structure of the prizes. Like this grand prize is that Kathryn and I deliver the first batch to whoever wins. You know, we have the Florida debate tonight, the Fox debate of the Republican candidates. The Florida straw poll is Saturday, and I know a lot of you would love to be here to be able to see the debate. A lot of you probably would love to come here and be able to vote in the straw poll. Well, you can’t. So what we decided to do is take Florida to you — and Florida is me, for all practical purposes. Florida is me and Kathryn. So if you’re the grand prize winner, we deliver the tea.

It’s not just a hit-and-run or a drive-by. We’re not just gonna drop it off and wave out the car window. We’ll be there for a little while, say hi, take pictures, whatever you want — except you can’t invite the whole town. There will be rules. Other prize winners will get gift baskets with Florida stuff and tea, Apple iPad 2, maybe a 15-inch MacBook Pro. There’s all kinds of stuff here; it’s all at TwoIfByTea.com. So you’ve got that going on. (sigh) That’s just the first five pages of the top of the stack. So let me take a break, let me come back and get started. I think we’ll start with Elizabeth Warren. I think we’ll start with Elizabeth Warren and we’ll go to Clinton and even though we’ll talk about what happened to the Republican in this vote yesterday on the funding of the government. Now, you know, Dingy Harry is running around talking about there could be a government shutdown — again! You ought to see the way this is written: “Another government shutdown ending scientific research and access to public parks!” It’s the same thing. I tell you they have a cut and paste template, at all these news agencies: “Government shutdown, here’s the paragraph you put in.”