Why Aren’t They Begging Rubio?

RUSH: It’s Emmy in Loveland, Colorado great to have you on the EIB Network.

CALLER: Hi, Rush, it’s great to talk to you.

CALLER: Hey, I’m no fan of the establishment. They irritate me most of the time, but what if they want Christie to run for the same reason I want him to run? Because he’s the best at articulating conservatism, besides you and maybe Marco Rubio, but there’s no one else out there.

RUSH: That’s an interesting question. Let me ask you, why do you think they’re not begging Rubio to run? Rubio has been just as adamant as Christie that he doesn’t want to run. In a contest of conservatism, Rubio wins versus Christie. So why are they not asking Rubio to run? 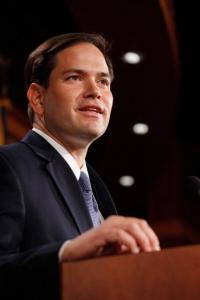 CALLER: He’d be my second choice.

RUSH: Part of it is, I think, that they genuinely believe that whoever the other nominees are can’t win. That’s another thing that frosts me. I think Bugs Bunny, Elmer Fudd could beat Obama in this election coming up because I think this is going to largely be about Obama. It’s going to be a referendum on his outright destruction of the wealth-creating genius of this country. I think Elmer Fudd could win, but I’m more concerned than that. I don’t want to just get rid of Obama, I want to take advantage of the opportunity we have to finally get a genuine, full-fledged, unapologetic conservative because this is going to be a major task, Emmy, rolling this stuff back. It’s going to take more than one election, and it’s going to take somebody fearless. And we’re not going to roll this stuff back having compromise and bipartisanship as our primary objectives.

RUSH: I think as far as the establishment’s concerned, there are two things. They don’t want a conservative to win for that reason, plus they do want to win. And I think they probably think Christie has a better chance than anybody else up there of beating Obama. That’s my guess. But I think what will happen is this: Whoever gets the nomination, if it is somebody outside the approval of the establishment, what then will happen is that all these establishment types will then start trying to buddy up to the winner, want to be part of his administration, and then spend the rest of their lives saying they were there at the right hand of this great, terrific president. That’s what happened to Reagan. Half the people that opposed Reagan did end up, especially in the second term, doing things in his administration, and they made the rest of their life career out of it.

To this day, some of these people still guest on television shows as Ronald Reagan’s X, or Ronald Reagan’s Y. Even the during the era of Reagan is over period, which Mitch Daniels also uttered, I should say, even when they were saying the era of Reagan was over, still some of these marginal characters in the Reagan Administration’s second term are still out there, claiming they were there, they were in the inner circle, they were making all these decisions. (interruption) I know it’s a serious question, Snerdley. Why aren’t people telling Rubio it’s not up to him? You’ve got Chris Christie saying, “It’s got to be in me. It isn’t in me.” “Well, it’s not up to you.” Why aren’t they saying it to Rubio? Because Rubio would win in a walkover. Rubio would win in a landslide over Obama. I’m hearing Bob McDonnell, Virginia, is the preferred veep candidate. I wouldn’t waste that on Rubio. Emmy, thanks for the call.

Folks, it’s not true that other conservatives are not well articulating our beliefs. What’s happening is that they’re all competing with each other for time during these debates. That’s a crowded stage up there and they are having to actually face each other and contrast and compare themselves to each other. Christie doesn’t have to do this. And this could be a well-planned strategery. Look at it this way: You’ve got the people that have announced and they’re on the stage of these debates. They have 30 seconds here, a minute there, but some of them get an unfair amount of time. Some of them don’t get very many questions asked of them. Some, the questions that are asked are gotcha types.

They don’t have clearly an unfettered opportunity to explain themselves on such a crowded stage. They actually having to face each other, contrast and compare themselves to each other. But Governor Christie isn’t having to do any of that. He can go give a speech at the Reagan Library or release a YouTube video, and there’s no challenge on the issues and there’s nobody out there disagreeing or contrasting or harping on it. He can say what he says about global warming or gun control, immigration, what have you, and he’s not getting dirty in the process. Nobody’s opposing him. Nobody is disagreeing with what he’s saying. He has a free ride, so to speak.

Perry, same thing. Perry had a free ride before he jumped in. Look at what happened to Perry when he got in. He announces, he gets in, automatically jumps to the top of the list, becomes the target of everybody on stage. He’s not an accomplished debater and wasn’t prepped for it. Look what has happened to Perry. Christie is not running that risk. Could be a good strategy. Christie is out there making these speeches and YouTube videos and they stand all alone. No disagreement, no challenging to any of it. But Perry jumped in, very little was said about the specifics of his record. I’m not attacking his record. I’m just saying it was not as carefully scrutinized. Christie would go through that, too, if he got in.

So as far as Christie is concerned, there’s an understandably good strategy in not getting in now. Now, at some point he’s going to have to. But he gets a free ride all the way down the road where he’s not in. Once he gets in, everything changes. Everybody on that stage will be gunning for him, and things about his record that some of you may not know will surface. And then you’ll be scratching your heads going, “Gee, can’t we all get along? Why are we tearing each other up?” Nature of the beast.

But Rubio, Rubio would win in a walkover. He’s conservative. He’s articulate. He’s great-looking. He’s Hispanic and sounds very smart. How can he possibly lose? If this were the Democrat Party, the party father would probably tell Obama to step aside and let Rubio run, if Rubio were a Democrat. There are more Hispanic voters now than there are blacks, and Rubio’s got more experience than Obama had when he decided to run. I don’t know how many times Rubio has voted “present” versus Obama.

RUSH: Great to have you, sir.

CALLER: Your theme this morning has been Republican enthusiasm. Of course that equates to the voter turnout. I understand that one of the major factors in us losing in ’08 was that Republicans were, quote, mad at Bush and many stayed home. To me, that’s ridiculous and childish. We can’t afford another four years of anything close to this socialist agenda.

CALLER: I’m sure it’s happened a number of times.

RUSH: Republicans stayed home because they were mad at Republicans in Congress spending all the money.

CALLER: Yeah. I don’t recall an election in my lifetime where it wasn’t a choice of the lesser of the evils. We’ve got to make some intelligent choices here and it’s absolutely essential that we must turn out in droves in order to overcome this obstacle. 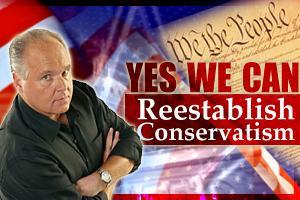 CALLER: I hope you’re correct. We have to all do whatever we can to gin up the enthusiasm level and get these people to the polls. They’ve got to understand what’s at stake.

Let me just say, I haven’t actually heard that specifically. It doesn’t surprise me. Some people think that. I do know that there’s a lot of passion for the proposition that Romney can’t win, and that if he does it’s not enough to actually start rolling back what’s going on. Anyway, look, the reason why they’re not pushing Rubio… I’m going to answer my own question. That’s what I do. I ask myself the best questions I’m ever asked and, therefore, I give the best answers. They’re not pushing Rubio because while they praise him, they don’t think he has had enough experience yet.

You people have forgotten: Charlie Crist was the guy, and Rubio kept coming on and on and on, and the conservative energy behind him and his conservatism triumphed — and Crist started talking to Democrats about a role in the party. The RINOs had nothing to do with Rubio triumphing. The RINOs weren’t even in his camp to start with. Another reason why they’re not pushing Rubio is he’s too conservative for them. With Obama on any ballot, this whole notion of “lesser of two evils,” I don’t think exists. Nobody’s in that camp on our side. There is no “almost an Obama” on our side, even Romney. I think this “lesser of two evils” business gets thrown out, too. There’s a whole lot of conventional wisdom here that’s going to be stood on its head before this is all over. Don’t doubt me.

RUSH: You know, the Rubio/Crist election is almost a great microcosm of what we are talking about: The Republican establishment versus an insurgent conservative Tea Party. If you go back and try to remember that, Rubio came from nowhere. He was seen as unelectable. “Way too extreme. Too much of a risk. Charlie Crist, he’s the elected governor. He’s the sure bet. Charlie Crist will give us the majority in the Senate. Charlie Crist is the way we need to go. Who cares that Crist may as well have been a Democrat? We need another (R), somebody who has an (R) beside their name. We don’t care whether they’re conservative or not. We just need the numbers here because we want to be in charge of the money. We want the committee chairmanships.”

You remember who the first prominent politician to support Rubio was? It was Jim DeMint, South Carolina Senator. Jim DeMint was the first prominent politician to come out and support Rubio. Rubio, the outsider, fighting his way in. Now, after he wins, the RINOs, the establishment come to his side (after Charlie Crist imploded) and they talk him up for vice president. But don’t forget: There wouldn’t be any Marco Rubio in the Senate today except for the conservative movement and Tea Party movement and a conservative effort to beat back the establishment. Rubio, I’m not saying he had no role. Don’t misunderstand. He was, of course, key, but he had the Republican establishment against him. It’s almost, as I say, a microcosm of what we are talking about and facing today as we choose a nominee.