CALLER: Hey, Rush. I just wanted to express my extreme thanks for helping me understand the area of politics a lot more. I started listening to your show probably about three months ago, and —

RUSH: Three months ago? Where have you been for 23 years?

RUSH: Oh, okay. That explains part of it.

CALLER: I always just went with what my grandmother said and I was never really interested in politics.

RUSH: What did your grandmother say? 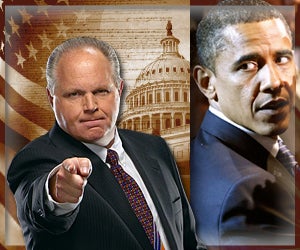 RUSH: Well, what did she say? Did she tell you not to listen or something?

CALLER: Ah, she always told me that you are a liar and not to listen to you.

RUSH: Your little old grandmother told you that I was a liar and that you shouldn’t listen?

RUSH: (sigh) Well, you’ve been listening for three months now, so you obviously think your grandmother was wrong?

RUSH: Yeah, it’s just been in her family and it was just handed down to her. It’s probably her DNA and so forth. I have a project for you, Brian: Have her listen with you someday. Start slow with a half hour. Gradually add five minutes every day. You’ll be up to three hours before you know it and you’ll have a brand-new relationship with your grandmother.