RUSH: Vice President Cheney says that the Obama administration owes the Bush administration an apology. Cheney yesterday called last week CIA drone strike against Al-Qaeda operative Anwar Awlaki a validation of the George W. Bush administration’s terrorist fighting strategery, said that Obama should apologize for his past criticism of these policies. We’ve got audio on this. Dick Cheney was on State of the Union on CNN with Candy Crowley who said, “I guess what I’m asking, isn’t the proof in the pudding? Hasn’t this administration waged a successful war against terror?” 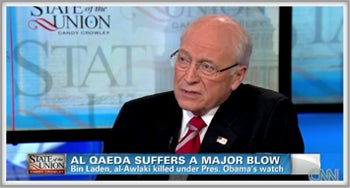 CHENEY: If you’ve got the president of the United States out there saying we overreacted to 9/11 on our watch, that’s not good.

CHENEY: Well, I would. I think that would be not for me, but I think for the Bush administration and — and that he misspoke when he gave that speech in Cairo two years ago.

RUSH: Right. And something else, something else. Here we have the regime with drones or whatever wiping out an American citizen, no due process, no charges, no evidence, no nothing, just, here’s a drone, you’re dead, Awlaki. What? Wait a second, though. And liberals are applauding this. Liberals are, “You see, Obama is tough on terrorism.” Right. Liberals are applauding. But waterboarding is an act of war. Waterboarding is crime. Waterboarding is a crime. Waterboarding is something that we should have these victims allowed a trial that would run down this country in New York City for two years. You can’t waterboard these people. You can’t put them on a waterboard and sweat the truth out of them and find out what they did, but, boy, you can shore bomb ’em to smithereens, we liberals will let you do that, but you can’t waterboard them. Go ahead and kill ’em, but if you waterboard them, we’re gonna try and put you in jail in the international court. Liz Cheney got in on this, too. Candy Crowley said, “Liz, you feel that Obama wronged the Bush administration?”

LIZ CHENEY: I think he slandered the nation, and I think he owes an apology to the American people. Those are the policies that kept us safe, they’re the policies, frankly, that contributed, the enhanced interrogation technique we know now Leon Panetta has said some of the intelligence we gained through that program helped us identify the location of Bin Laden. So I think the president owes everybody an apology, frankly.

RUSH: Yeah, and they know it’s not gonna be forthcoming, there won’t be one, but they’re out there making the point. And Cheney, by the way, did endorse the killing of Anwar Awlaki as justified, despite Awlaki’s US citizenship. He suggested the Obama White House is being hypocritical when it approved a deadly strike against Awlaki while condemning waterboarding, so-called enhanced interrogation. He’s exactly right, I mean it’s more than just irony.