CALLER: Hey, hey! Hi. It’s exciting to talk to you, my friend.

CALLER: Hey, listening to you talk about the Durbin amendment this morning made me think you’re only getting about half of the story. The smaller banks of assets less than $10 billion haven’t had any effect on their rates that they charge the merchants at all —

CALLER: — for the card swipes.

CALLER: When they’re telling the consumer leave Bank of America, go to the — your local banks that aren’t gonna charge you the fees —

CALLER: — your merchants, which is again another damper on business, are gonna still be charged these higher rates; and, you know, whole thing to me is ludicrous. 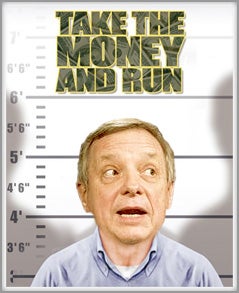 CALLER: And no one knows… You know, the larger banks, the larger banks have more outlets throughout the country, so there’s more access to the consumers, whereas your small local banks like your community credit unions don’t.

RUSH: This is not about the banks to me. I don’t want to be misunderstood here. I’m not writing a brief for the banks, and I’m not trying to come defend ’em. Folks, don’t misunderstand me on this. I don’t use Bank of America; I don’t know anybody there. That’s not the point here. The point is the actions of a single US senator who made all this happen himself! His stupid amendment is the reason this is happening, and he knows it. He doesn’t have the guts, the gonads to admit that, so he cowardly goes to the Senate floor to hide behind the power of his office and start creating a run on Bank of America, all to cover his lily white rear end! This is not the purpose of the United States Senate, nor the purpose of individual United States senators, but this is who the Democrat Party is. This is what statism looks like.
BREAK TRANSCRIPT

RUSH: Let’s go to Chicago. James, hi. Great to have you on the program. Welcome.

CALLER: Thanks for having me, Rush. Before I get to my main point, your list of the demands of those guys for the stock market stuff, where was “legalize pot” on that? Shocked that wasn’t in there. But you were discussing Durbin earlier. I’m from Chicago. I can’t stand the guy, I think he’s a total tool, but in regards to his comments on Bank of America, I had Bank of America. I didn’t originally sign up with them. I had LaSalle Bank; they got bought out by Bank of America. Now they want to charge you $15 a month if you want to use a teller. Now it’s another $5 a month for an ATM fee. It’s just getting to the point where it’s outrageous. You should not be charging people to have access to their money, especially since they’re making money on every end of it.

RUSH: Okay, that’s perfectly fine. If you think that, fine; find another bank.

CALLER: Trust me, I’m in the process of looking, but I don’t see any… I don’t like the guy. I honestly have Durbin on my “like,” the “like” on my Facebook page, just so I can comment on his BS comments he makes all the time.

CALLER: The thing about it I understand it. I work at a restaurant. I understand. How it works — I’m sure you know about it — is they’re allowed to charge more money now for credit cards than they are for debit card transactions so they’re trying to get everybody away from using debit card transactions. Now, I don’t understand why you would only do one or the other if you’re the government. It makes absolutely no sense.

RUSH: You think a lot of forethought went into this?

CALLER: I guess… Seriously, that’s the only result they can come from. I can’t figure out why they’d do it.

RUSH: They’ve got staff running numbers on static calculations, pure and simple. They may have some incentive to want to penalize debit card usage more than credit card usage, who knows? My point is: This is Central Planning involving people who haven’t the slightest idea what they’re doing. They are causing the resulting price increase of doing business at Bank of America and anywhere else, and trying to make you not realize that. So he goes to the floor of the United States Senate? This could very well be illegal. You can’t do things like this to try to hurt a business, and a United States senator doing it is beyond the pale. Congress can pass laws and businesses can react, and that’s what’s happened here.

You wouldn’t be facing $15 of new charges if the Congress had left everything alone, if they hadn’t messed with this, if Obama hadn’t wanted to get his mitts on the whole banking system, if the Democrat Party didn’t think they could do it better than anybody else. But since they had to come up with a financial regulatory “reform” bill — under the false premise, by the way, that every consumer is getting screwed and they’re gonna save you. It’s just like when they get involved in cable TV rates to bring down your monthly cable bill, look what the heck happens. The last thing that happens is the cable bills get cheaper — and then when it happens? They pass laws, businesses react, and then what do they do?

They act like innocent bystanders and spectators outraged over what the bank’s doing and what the businesses are doing when they are the reason for it! It’s no different than levees failing after Katrina. The federal government authorized the money. The money ended up in the back pockets of people in New Orleans and Louisiana. It did not end up in levee repair. Then Hurricane Katrina comes along; the levees cannot hold the water. They break, the flood happens, and members of Congress stand around as innocent bystanders, “What the hell happened! Who’s responsible for this? What did Bush not do?” when they were responsible because they didn’t keep tabs on what was being done with the taxpayer money authorized to shore up those levees. It’s the same thing here. Again, I want to tell you: I have no brief for Bank of America. I don’t know a single person who works at Bank of America as a janitor or a CEO.

I do not use Bank of America and I’m not defending them, but I’m gonna tell you this: I’m gonna defend the private sector against this kind of meddling from incompetent boobs in the Democrat Party every day I’m on the air; and I’m gonna try as best I can to tell you that every time your cost of living goes up or every time expenses go up at places you do business with, odds are it’s because the government’s got involved and is making it more expensive for these businesses to operate. They have every right to react. They have every responsibility to maintain their pursuit of profit. If the federal government becomes one more obstacle in their way, which is the case, they have every right to employ business decisions to try to maintain and keep their business open. Pure and simple! And it gets harder and harder and harder to do when you got people like Dick Durbin meddling in it.