RUSH: In Dick Durbin lingo, don’t go to the bank on this, but I just found something during the break. I found pictures of the new iPhone on Apple’s website called the 4S. It looks exactly like the current iPhone 4. So I went to the web address and took the S out of the address, just iPhone 4, and same picture, just different shadowing. So for those of you following this, at least one of the new phones, if there is more than one, don’t know if there is gonna be more than one, the biggie, the 4S appears to be identical in appearance to the current — (interruption) Well, yeah, the inside is supposedly gonna be different, yeah, yeah. So far no surprises here. The inside, that’s where all the improvements are in software, the guts, and so forth. (interruption) H.R. says two press conferences I’ve just destroyed, Chris Christie and now Apple’s. (laughing) Well, that’s exactly right. I want the audience to stay here.

If I can find out what Apple’s gonna say before they say it, there’s no reason for you to go to Apple. By the way, Apple is not live streaming their event anyway so we couldn’t JIP it, we wouldn’t anyway. But there’s no live streaming. No, we would not JIP it. Have we ever JIPed an Apple press conference? We’ve never JIPed an Apple presser. No, we wouldn’t JIP this. I would not say a word about it. (laughing) I would describe the new — (interruption) yeah, I probably would. But they never do televise these things. They always wait until afterward and they release a keynote video. (interruption) Promote it like Wolf Blitzer would? Count down to the Apple iPhone event. Anyway, the iPhone 4S is the same exact phone on the outside as the current iPhone 4. 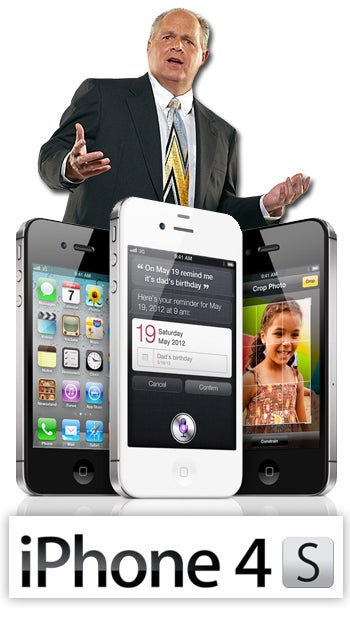 Maybe I’m suffering from iPhone rage. I’m ticked off there’s not an iPhone 5. Well, so far. They’re still doing it, they’re still giving details about the 4S, and — (interruption) oh, no, Snerdley, it’s a massive, massive internal upgrade, new antenna, new graphics. This thing is faster graphics than an Xbox. Faster graphics than most home gaming systems have. It’s a world phone now. Eight mega pixel camera. There’s a bunch of new stuff inside it. Eight mega pixel camera with a light sensor, yeah. It’s got that, and that’s the last I saw before I had to come back here to do the show. I don’t know what else they’re gonna say. Look, you asked, “How long is it gonna take to talk about a new phone?” It took Christie 45 minutes to say he wasn’t running.

There could still be an iPhone 5. I doubt it, though. But these Apple deals, when everybody thinks it’s over, one of the things Steve Jobs always did, his trademark, “Oh, one more thing.” My wild guess is that, “Oh, one more thing,” if they keep that alive, Jobs isn’t there, I don’t think, he may make a cameo, who knows, but if they do the, “Oh, one more thing” gig I hope it’s that thing I was telling you about yesterday, the program called Assistant, the voice-to-text nuance technology. We will see in due course. These things only go about two hours. They just introduced the new iPod. The new system software which will be released on October 12th to the public, the phone on October 14th, I think. Anyway, I’m looking at this and I’m taking note of all the Mac fan boys all over the world are just fascinated with this. Last night was Christmas Eve for a lot of these people. Wouldn’t it be great if the economy were such there was this kind of anticipation for what a lot of companies were doing? It would be a sign that the country is rebounding.

The Apple presentation is over. There is no iPhone 5. I can’t tell you how many people asked me, friends of mine, I said, “I’m telling you guys, there isn’t an iPhone 5, there’s not gonna be an iPhone 5.” Let me tell you right now when there’s gonna be an iPhone 5. The iPhone 5 will come out sometime next year when they’re ready to put legitimate LTE 4G speeds in it for AT&T and Verizon. Right now the networks are not rolled out enough, the chip sets for it are too big and use too much battery power, not enough people have 4G LTE phone speed availability anyway, so that will be the iPhone 5 when they have legitimate LTE 4G speeds. That will be the next iPhone 5, the next iPhone, and that will be the 5 and it won’t be until the LTE 4G networks are widely rolled out and the chips are manufactured so they don’t churn the battery. That will be the 5. (interruption) All the blogs said they’re gonna be a cheap phone, a moderate phone, and they are all over the place.

I don’t know if there’s a cheap iPhone 4 only, not a 4S. I am hosting the show here, Snerdley. I haven’t really been able to catch everything. I do multitask, but I haven’t seen any reference to a cheaper version of the iPhone 4. My guess is there will be eight gigabytes, get rid of the iPhone 3GS, sell the iPhone 4 as an eight gigabyte, you know, $49 phone. They may keep the 3GS as a free phone if you get a contract with whatever carrier. But I guarantee, a lot of people walking out of Apple’s auditorium today singing Peggy Lee’s “Is That All There Is,” because they were expecting, they were hoping, these guys already had renderings, photos of what the iPhone 5 looked like; much bigger screen, thinner tear-drop design, all these guys were orgasming over it. Stock is down 11 bucks. It will be back.