A Proposal: Tax the Unions

RUSH: Labor unions are part of this, MoveOn.org is part of this. So the labor unions now stand for socialism. They do. If you listen to Trumka, if you listen to son-of-a-bitch Jimmy Hoffa — well, folks, called us sons-of-bitches. I take it back. I was just trying to be funny. It was inappropriate. If you listen to this, all socialists. But is that what union members believe? Some of these union members are hard workers. Some of the union rank-and-file work hard. Some of the jobs those people have, coal miners, this is hard work. They break their backs. Do they think that their taxes ought to go to people for free college and free health care and guaranteed jobs? I’m talking about the rank-and-file. Do they think they ought to be breaking their backs for this spoiled rotten bunch of kids down on Wall Street? 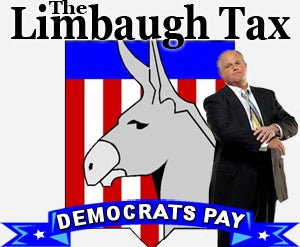 Is that what labor union members believe? Because their bosses are supporting it now. Their bosses are funding it. Their bosses are underwriting it. My guess is that there is a whole lot of Reagan Democrats in these labor unions. There are a whole lot of conservatives in these labor unions. They’ve got no control over how their dues are spent, but they do control how they vote, and I don’t think they support the welfare state like this. We used to talk about welfare queens. We now have welfare punks. You know, you Occupy Wall Street people, what do you need sleeping bags for? Why not just a cardboard box? That’s been shown to work well. You can find under these dilapidated bridges in this country a lot of people sleeping in cardboard boxes under ’em.

You know what I think we ought to do, ladies and gentlemen? Call for a union tax. And I am not kidding. Unions are like corporations now. They have executive management, they have boards of directors, they have shareholders in the form of members, and they have employees in the form of staff. We hear all this talk about paying your fair share. We hear all this talk about raising revenue to pay for jobs. So why is it that large, wealthy, cash-rich organizations are exempt from paying the federal corporate income tax? I am absolutely serious about this. How come the unions get away with not being taxed? Why should we accept as a given a policy set decades ago by the progressives giving favored treatment to unions, which are essentially just corporate entities of their own? No, I’m serious. Look, if these people have hundreds of millions of dollars to use for politics, why can’t they afford their fair share, as the liberals like to call it?

No matter how many union members are out of work, the money is always found in the hundreds of millions to donate to Democrats. The unions exist to fund the Democrat Party more than they exist to ensure jobs for the rank-and-file. Now, private sector unionization is less than 10% of the workforce. But they have enormous clout because the government has set them up with protections, including favorite tax treatment. All we hear about is oil company subsidies and other rich corporations with all their tax breaks. We never hear about the fact that the unions are protected, including with favored tax treatment. They’re not churches; they’re not shelters; they’re not food kitchens; they’re not charities. Rich unions should not be protected. Liberals want to talk about corporations and profits. Well, how about rich unions that don’t pay one penny in federal income tax? And they make lots of profit. They shouldn’t be tax exempt.

There. You know what? I just swerved into it. I think I just found a new source of revenue the Republicans could support at the next debate. The media and the Democrats, one and the same, constantly haranguing Republicans, “Well, what about the revenue side, what about the revenue side?” Okay, Romney, Perry, Santorum, Paul — nah, forget Paul — Cain, Bachmann, do you support tax increases on the unions as corporate entities, as a new source of revenue? No reason they should be exempt, none whatsoever.